Art as a Form of Community and Youth Empowerment

byJessica Nobile
in News, Social Justice, Social Work
0
ADVERTISEMENT
Share on FacebookShare on TwitterShare on LinkedinShare on PinterestShare via EmailShare on Reddit

On February 20, 2016, in a small predominantly black and impoverished community in Athens, Georgia, a mural was unveiled dedicated to civil rights leaders, Malcolm X and Dr. Martin Luther King Jr. The mural project was organized and designed by Broderick Flanigan, of Flanigan’s Portrait Studio, as a mechanism to stimulate community empowerment through the creative medium of public art.

Cotton fields and plantations once stood on the ground of this small East Athens community where the mural resides. Flanigan described this small community within Athens as vibrant and full of promise despite the poverty, violence, and under-employment obstacles facing youth and other residents.

This mural project was then organized to help the community acknowledge its worth by emphasizing the struggles and strengths of African Americans. The motto of this mural project was “Show us a better tomorrow”. Flanigan involved a variety of community stakeholders throughout Athens to ensure the fruition of this project. Youth ages 10-17 living in East Athens helped design and paint the mural although the images were chosen by Flanigan.

Additionally, members of the University of Georgia’s (UGA) student chapter of the National Art Education Association (NAEA) participated in the painting of the mural. Also, Dr. Llewellyn J. Cornelius, social work professor at the University of Georgia and director of its Center for Social Justice, Human, and Civil Rights, assisted in the creation of the mural and spoke at its dedication. A variety of sponsors donated to the project such as Athens Land Trust, Habitat for Humanity, Athens Housing Authority, School of Social Work Center for Social Justice, Chess and Community, and Ebenezer Baptist Church West.

Although a variety of stakeholders engaged in the mural project, Athens remains a town divided by race and socioeconomic class. Harry Sims, commissioner of East Athens, declared “We don’t have one Athens, but we are going to get there and we are going to do it together”. Dr. Cornelius also echoed this sentiment and stated “all people must work together to ensure social justice”.

Absent from the dedication ceremony was the polarized nature of the Athens community at-large. However, the vibrancy Flanigan envisioned was present with wish cards that swayed delicately from the trees sharing messages of hope. People of all races shook hands, and music reverberated from Bob Marley “Get up stand up for your right” and Mos Def “Shine your light on the world, shine your light for the world to see”. Mothers, fathers, youth, students, community leaders, and residents from all over Athens took part in the dedication ceremony. 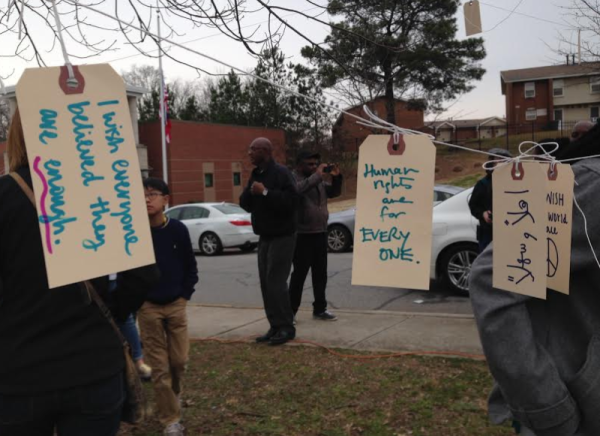 One young female who participated in the painting of the mural said to me, “I had a really fun experience and I hope whoever walks by get inspired and it puts a smile on their face”. Another female youth shared her hopes that “people walking by can be inspired to know where they came from, so they can be guided on the right path”. A variety of youth, from all backgrounds engaged in the project and viewed it as a positive personal experience as well as viewing the mural as a means to help instill hope in the community. 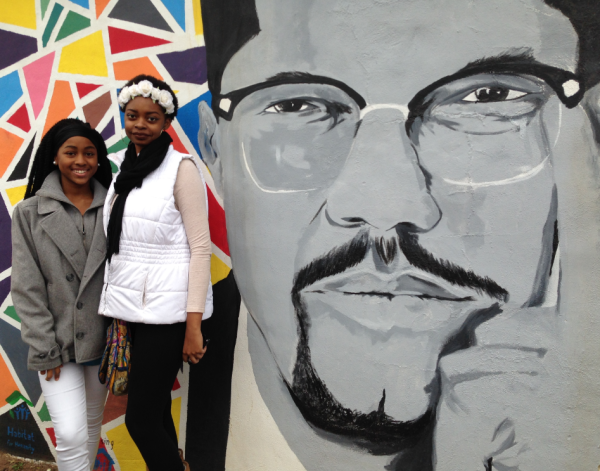 I was able to speak with Broderick Flanigan about why he chose to organize the mural project. He simply stated, “This was a special project to commemorate MLK day of service by incorporating youth in the community through public art.” Flanigan reiterated that youth are our future leaders , and “we must cultivate their positive energy and show them how to be about community. Empower them and give them a sense of belonging.” He believes that public art is a forum for community and youth empowerment as it gives a visual representation of accomplishment, instills a sense of belonging, and teaches skills.

Flanigan chose the mural images as they reflect the spirit of the community by displaying past Civil Rights leaders to remind people of the struggle in order to “keep the Civil Rights Movement relevant and make it a living thing in the community so everyone is seen as equal”. He shared that he grew up in the community and can relate to the youth experiencing challenges associated with poverty, parental need to work multiple jobs, parental under-education, and high rates of unemployment present in East Athens. “These children already have their own opinions and voice, they just need a platform for its expression”. Youth in this community need more employment options; “they want to work, employment is just unavailable”. 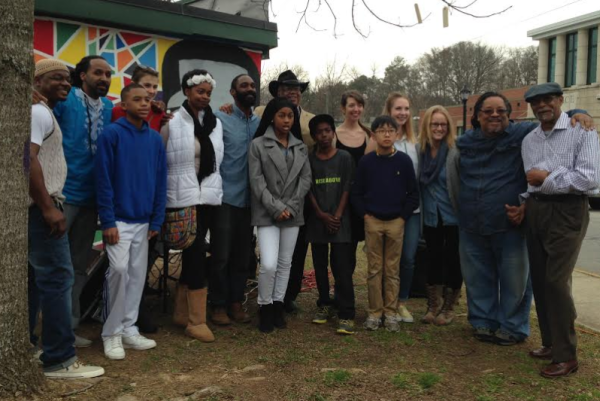 Flanigan wanted to emphasize that this area of Athens is often viewed in a negative light although in reality its nature is brilliant, and he intends to continue engaging the community through art and other projects to reveal its true nature and uplift its members out of cyclical poverty. He stated, “this community is vibrant and has a lot of energy” in which he believes it can be fostered through art and a gathering of people.

He sees the future of East Athens as a blossoming economic hub with the help of community empowerment and activism. Flanigan provides a free weekly art program to youth living in East Athens. Currently, he is also developing a project with another artist to create a community garden and a surrounding structure. In this way community members will be taught skills, such as carpentry and window-making, through the garden’s construction. 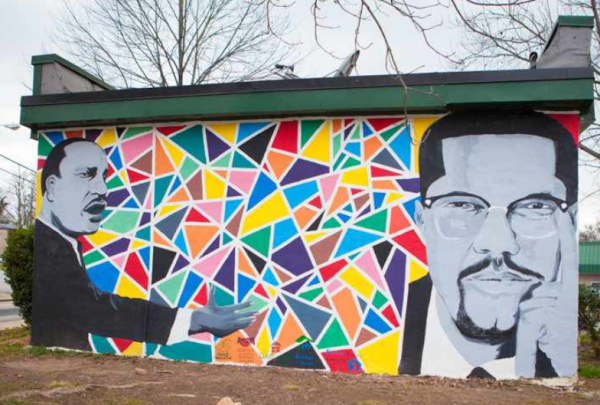 Flanigan wanted me to share his personal motto with all of you “Inspiring others through art” and also his tag line “#SpreadLove”. He communicated a need for more support to continue his efforts to blossom this misunderstood community. For those of you like me who want to see this community grow, feel free to reach out to Broderick Flanigan at his website www.fpsartsociety.com and offer support.

Alabama’s Legislature Continues to Wage War on the Poor