Alabama’s Legislature Continues to Wage War on the Poor

byJustin Vest
in Employment, Opinion, Politics
0
ADVERTISEMENT
Share on FacebookShare on TwitterShare on LinkedinShare on PinterestShare via EmailShare on Reddit 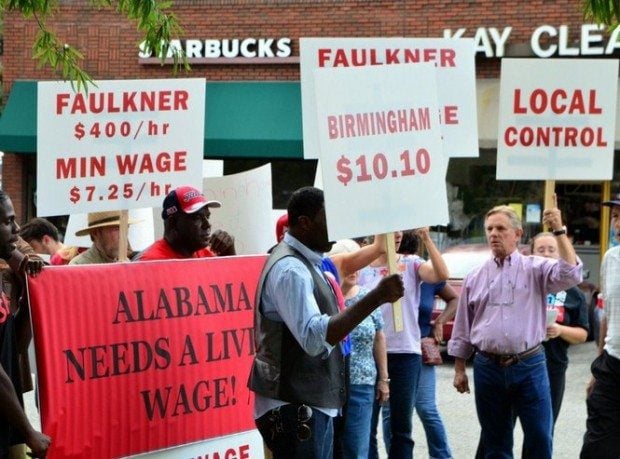 Alabama made headlines last week over a dispute between the Democratic City of Birmingham and the Republican state legislature on whether the city can pass a law to increase its minimum wage higher than the federal mandate. Last summer, the Magic City passed a law raising it’s minimum wage to $10.10 an hour by 2017.  The law would have been enacted incrementally beginning in July 2016 by raising the current minimum wage of $7.25 to $8.50.

However, lawmakers have since fast-tracked a bill that would prevent any municipality from requiring employers to provide benefits such as paid leave, vacation time, or even a marginally livable wage not already mandated by federal law. On Thursday, the state legislature sent their obstructionist bill to the governor who signed it into law an hour later.

Anyone familiar with Alabama politics shouldn’t be surprised. It appears Alabama’s state government does not care about poor people–nearly 20% of its population which is over 900,000 people including 300,000 children are living in poverty. With only 30 meeting days left in the state’s legislative session, you would think there would be more pressing concerns than thwarting the will of the people.

Alabama has cut funding for education, social services, and continues its refusal to expand Medicaid. And while this is all evidence of the state’s complete disregard for impoverished residents, its efforts to block Birmingham’s minimum wage increase is a direct assault on the very notion that citizens might govern themselves. Alabama has nothing to lose by allowing Birmingham to implement a $10.10 minimum wage.

You can make all the political arguments you want about how a similar statewide increases might deter businesses from coming to Alabama or result in layoffs–results not seen after wage increases in other states—but Birmingham should be a win-win. There’s no political liability to allowing Birmingham to set a higher minimum wage, the extra income means more tax revenue for the state’s anemic budget, and any perceived negative consequences–let me reiterate that empirically there are none–would only affect the city.

The leadership in Birmingham is hardly radical. The fact they stood up to the state legislature by attempting to put their minimum wage law into effect before the state could take action to delay only furthers evidence of how needed the increase really is. The proposed wage increase still isn’t enough to afford a 2-bedroom apartment, child care, or eliminate the need for other forms of assistance, but it could mean a little more food on the table for working families.

Alabamians have endured the ridiculous priorities and imaginary fears of the Republican-dominated statehouse for far too long. Alabama residents must begin to organize themselves to bring change to the state. Academics understand the scope of the problem, churches and service-based nonprofits see the real-world impact, and everyday people experience the constant struggles of living on poverty wages.

It won’t be easy, and it won’t happen in a single election. However, if people concerned about a living wage start talking to one another to come up with solutions–including running for office–then we can start to see change in Alabama.

Justin is a macro social worker living in Silver Spring, MD with his partner and two children. Originally from Alabama, he earned his BSW from the University of Montevallo and MSW from the University of Alabama. He is currently the DC Regional Organizer for Progressive Maryland where he works to empower working class and low-income families to act for social, economic, and racial justice.

First Responder Mental Health: It's Not All In The Mind