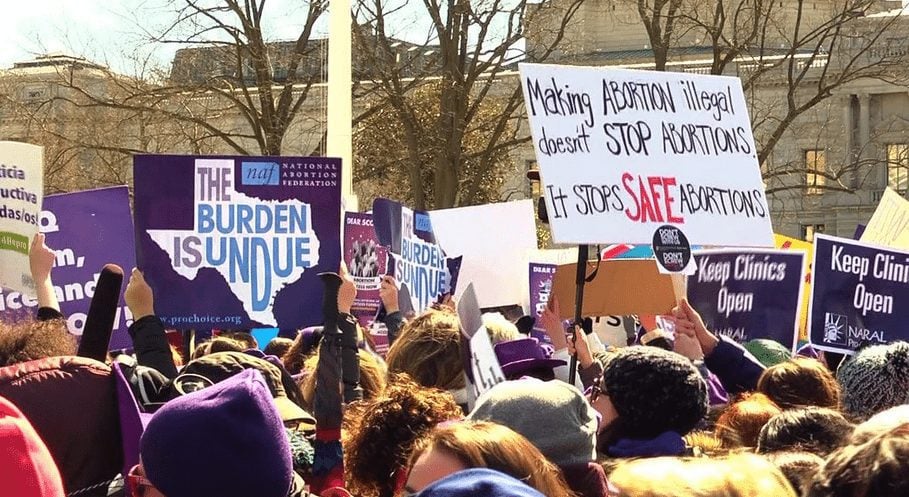 For a brief time in American history, women were nationally extended the right to choose a legal abortion after the pivotal ruling of Roe v. Wade (1973), giving them a say about their reproductive health in a man’s world. The implications of this ruling were manifold: 1) women were granted reproductive rights, 2) women no longer underwent dangerous procedures to procure an abortion, 3) women were no longer forced to carry out unwanted pregnancies, 4) pregnancy no longer prevented a woman from fulfilling her dreams or aspirations, 6) societal progress was made, and 7) women defined their lives through the right to choose.

Recently, women’s rights have been under attack in varying locales throughout the U.S. States, such as Texas, Louisiana, and Mississippi have implemented laws that now make abortion almost inaccessible to women living in those parts of the United States. Just like before the Roe v. Wade (1973) ruling, women are resorting to dangerous methods, such as ordering poisonous abortion medicine online, to prevent birth. Women and their choices are yet again being ridiculed. Women and their rights are being vehemently assaulted by conservatives and their politicians to the detriment of our society.

On March 2, 2016, the Supreme Court of the United States (SCOTUS) heard one of the most significant abortion access cases this generation, Whole Women’s Health v. Hellerstedt; a case that challenges the implementation of Texas’ Omnibus Abortion Bill (HB2). Currently Justices Ginsburg, Breyer, and Sotomayor clearly oppose the upholding of HB2, however a majority rule is required to overturn this law. If SCOTUS fails to obtain a majority, then the lower court ruling of HB2 will remain implemented until a new Supreme Court Justice is appointed. Meaning, a variety of roadblocks to abortion will be sustained in Texas.

HB2 makes it illegal in Texas for a woman to have an abortion after 20 weeks unless to “avert the woman’s death or a serious risk of substantial and irreversible physical impairment of a major bodily function”, excluding any psychological impairments caused by the pregnancy. Under this bill, women in Texas must carry fetuses with severe abnormalities to full term. Women impregnated through rape must also give birth, as psychological damage is not considered justifiable for an abortion.

A rally took place outside of SCOTUS on March 2, 2016 as the Supreme Justices heard Whole Women’s Health v. Hellerstedt. Pro-choice and anti-abortion activists fervently competed and protested their beliefs. Troy Newman, President of Operation Rescue, claimed “this is common sense regulation. I want to see abortion ended today” and made claims that doctors who perform abortions are low-level medical providers.

Troy Newman forgot to mention that many woman have reverted back to illegal and dangerous abortion procedures due to the stringent abortion access laws. Is it common sense to force women to undergo dangerous procedures to prevent unwanted childbirth? Another anti-abortionist, stated “We don’t discriminate against anyone, we love all babies”. I wonder, what about love for all women and their right to choose. Is not removing the right to choose a form of discrimination against women and their rights?

Pro-choice activists swayed signs stating “The burden is undue”, “HB2 is bad”, “Sister strong” and “Keep clinics opens”. Dr. Willie Parker, a gynecologist who performs abortions in Alabama, shared that the problem with women’s health is invasive political conservatism making legal medical decisions they know nothing about. Dr. Valerie Peterson shared her abortion story- because she lives in Austin, Texas she was forced to get an abortion in Florida after finding out her unborn fetus was 100% not viable due to an undeveloped brain. She shared that her wealth made her lucky and able to obtain an abortion outside of Texas, but that this option is unavailable for the majority of women residing in that state.

Since the rally on March 2, 2016, SCOTUS has yet to rule on this monumental case. Thus uncertainty pervades this nationally charged issue.  We cannot say whether previously achieved rights for females will be overturned and replaced with the antiquated precedent- that women do not have a voice or say socially or personally; or if we women will maintain our right to choose.   Although the Supreme Justices are still debilitating on Whole Women’s Health v. Hellerstedt, this case continues to receive national attention.  Not simply because of its impact, but also due to the upcoming presidential election.

What is truly shocking, in this way that is almost demobilizing because of disbelief and fear, is the reality that the majority of presidential candidates are in favor of overturning Roe v. Wade (1973).  Of course, the majority of the candidates are white men, but not all.  What unnerves me most is the message we are sending, not just in the United States, but throughout the world.  The message that women are undeserving of the right to choose.  The message that men still have control and power over women.  This message is unrealistic, wrong, and degrades us strong females.

Deep within me, lies this strong desire to become a mother, but I am afraid to bring children into a man’s world that persistently imposes gendered notions on mainstream society. A society that frequently minimizes women’s right to choose, not simply in regard to an abortion, but in all other matters as well. A society that teaches this is a man’s world and men can dictate the terms in how we women choose to live. One in three women have had an abortion before the age of 45 since the ruling of Roe v. Wade (1973).