Senator Chris Murphy and the Historic Filibuster on Gun Control

byMichael Hulshof-Schmidt
in LGBTQ, News, Politics
0
ADVERTISEMENT
Share on FacebookShare on TwitterShare on LinkedinShare on PinterestShare via EmailShare on Reddit 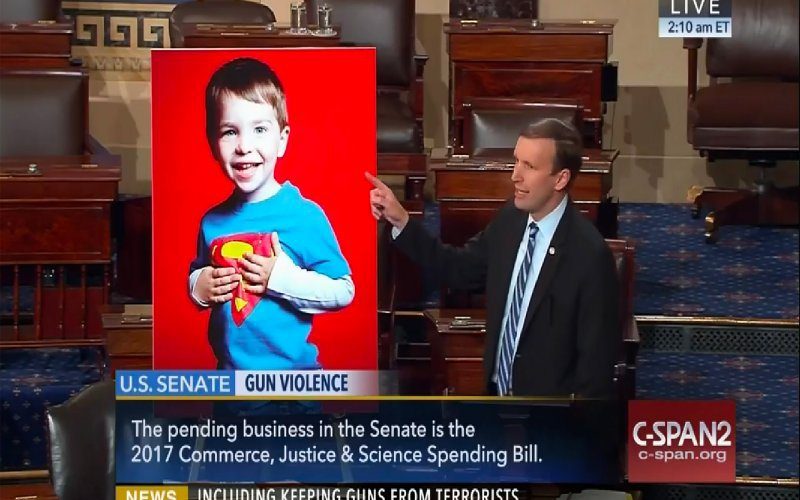 *Update: The weapon used in the Orlando massacre was originally reported as an AR-15. However, Police have confirmed the semi-automatic weapon used was a Sig Sauer MCX.

Last week was an extraordinarily painful week for the LGBTQ community, in the wake of last Sunday’s massacre. If it is possible for something good to come from all of this hate, homophobia, and fear, I hope part of the healing will come from gun control reform.

Kudos to Sen. Chris Murphy (D-Conn), for leading the filibuster on the Senate floor to expand gun control policies with two specific measures. Yes, this is the very least the senate can do in response to the massacre in Orlando. As a side note, I need to point out that this is also very tied to race, gender, homophobia, and misogyny. The Pulse was — and will be again — a safe space for LGBTQ people, mostly queer people of color. The United States seems to feel it is acceptable to regulate women’s bodies, so why can we not regulate guns? Finally, the NRA’s bedfellow, Mitch McConnell, has acquiesced and agreed to hold votes for the proposed amendment.

It grows ever wearisome to hear the call for prayers every time we have people murdered by guns. We do not need the prayers, we need gun control! Sadly, I have to offer a dishonorable mention to Florida Governor, Rick Scott, a.k.a Lord Voldemort. When reporters asked Scott if there was anything that could be done on a policy level to prevent future shootings like this, Scott – who has put forth enormous energy to relax gun control laws where there is no waiting period currently to buy the AR-15 – replied: “We can pray for the victims, pray for the families and pray this never happens again.” How’s that working so far?

There are at least 27 reported gun deaths EVERY DAY in the United States. The AR-15 was used in the following massacres: Aurora, Colorado, 12 killed, 70 wounded; Sandy Hook, Connecticut, 26 killed; Santa Monica, California, 5 killed, 4 wounded; Roseburg, Oregon, 9 killed; San Bernadino, California, 14 killed, 22 wounded. Maybe it’s just me, but prayers don’t seem to be doing much to change things. Maybe we need action, such as adopting expansive gun control measures. Want that to happen? Get out and vote!

The constitution is a living document and the flaws of the second amendment seem glaringly obvious. Given that no women and no people of color had any representation or voice in drafting the original document, it would stand to reason that this document needs further tweaking to represent more voices.

If you do not see your senator on this list, please contact them and let your voice be heard. I wish everyone a Happy Pride Month and let us not give into fear but share our love and solidarity!

Shared Humanity after the Orlando shootings

Michael has been a progressive educator for over two decades. He started EqualityWorks, NW over three years ago which provides workshops and trainings around race, power, gender, privilege, and equity.

Shared Humanity after the Orlando shootings

One Self Care Skill Every Social Worker Should Use