bySWHELPER
in Aging, Mental Health
0
ADVERTISEMENT
Share on FacebookShare on TwitterShare on LinkedinShare on PinterestShare via EmailShare on Reddit 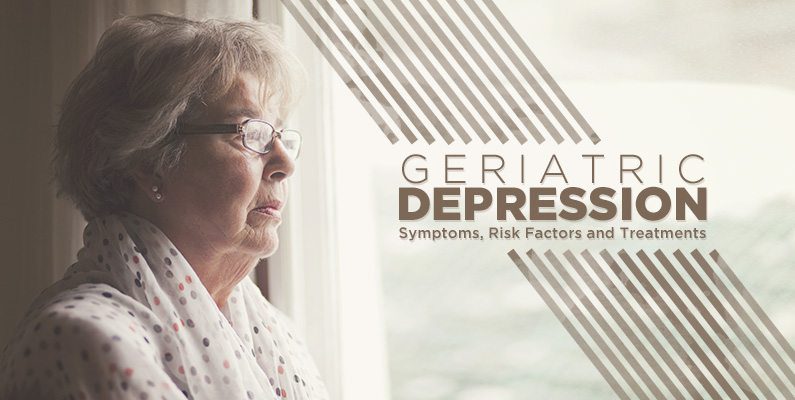 Around 7 million of the nation’s 39 million adults ages 65 years and older are affected by depression, according to the Centers for Disease Control and Prevention (CDC). Although a majority of older adults are not depressed, they have an increased risk of developing depression, which is a persistent sad, anxious or empty feeling, or a feeling of hopelessness and pessimism.

Unfortunately, depression in older adults is often not recognized or treated. Symptoms may be mistaken for natural reactions to illness or life changes that occur during aging. Geriatric depression is associated with an increased risk of suicide, decreased physical, cognitive and social functioning, and greater self-neglect, reports the Annual Review of Clinical Psychology.

Due to its consequences, geriatric depression is regarded as a major public health problem. On a more positive note, the CDC says that it is “fairly easy to detect” and “highly treatable.”

Depression can cause feelings of sadness or anxiety that last for weeks at a time. Additionally, a wide range of other symptoms may be present.

Social risk factors for depression, though less important in old age, can become more significant in very old age when individuals face greater losses and fewer resources. As with other ages, Psychology and Aging found that late-life depression is linked to the number of stressful life events experienced. Also, troubled relationships can explain depressed older individuals, including spousal depression, marital conflict and perceived family criticism. In The Journals of Gerontology, financial trouble is one of the most common stressful life events experienced by older adults.

In a review of evidence-based therapies for depression in older adults, Clinical Psychology: Science and Practice named the following as beneficial: behavioral therapy, cognitive behavioral therapy, cognitive bibliotherapy, problem-solving therapy, brief psychodynamic therapy and reminiscence therapy. A behavioral treatment plan for depression in nursing homes was successful in Clinical Case Studies. It found a strong increase in positive affect and activity level after a 10-session program for increasing pleasant activities was administered. In the Journal of Mental Health and Aging, a meta-analysis found that psychotherapeutic interventions changed self-rated depression and other measures of psychological well-being in older adults by about one half standard deviation and clinician-rated depression by more than one standard deviation.

In 2007, an expert panel recommended home- or clinic-based depression care management (DCM) along with cognitive behavioral therapy for older adults with depression, the American Journal of Preventive Medicine reports. DCM uses a team approach with a trained social worker, nurse or other practitioner alongside a primary care provider who prescribes treatments in consultation with a psychiatrist. Clinical trials link DCM to a reduction in depression symptoms, higher remission rates and improvements in health-related quality of life, reports the CDC.

Prevention efforts are often directed to those who are at an increased risk of disorder. The American Journal of Psychiatry found that treating all patients with subsyndromal depressive symptoms could prevent 24.6 percent of new depression onsets in that period. In Aging & Mental Health, cognitive behavioral therapy demonstrated significant benefits in the prevention of depression in nursing home residents. Treatment of insomnia and other sleep disturbance is a valuable opportunity to prevent depression in older adults, given the highly effective nature of cognitive behavioral treatments for insomnia in this age group. The American Journal of Geriatric Psychiatry identified that individual educational interventions for subjects with chronic illness, individual therapy for at-risk bereaved older adults, cognitive-behavioral interventions to reduce negative thinking and life review were interventions with the most empirical support. Programs to reduce social isolation may also help prevent depression in older adults.

Helping Seniors in the Community

Southeastern University offers an online B.S. in Human Services and an online M.A. in Human Services to positively impact seniors. Both programs equip graduates with the knowledge and skills needed to work in and lead human service environments. The master’s program offers a gerontology specialization, and both degree options take place in a convenient online format.

Helping Pets and People in Crisis

Helping Pets and People in Crisis

The Impact of Recent Court Decisions on Abortion Access