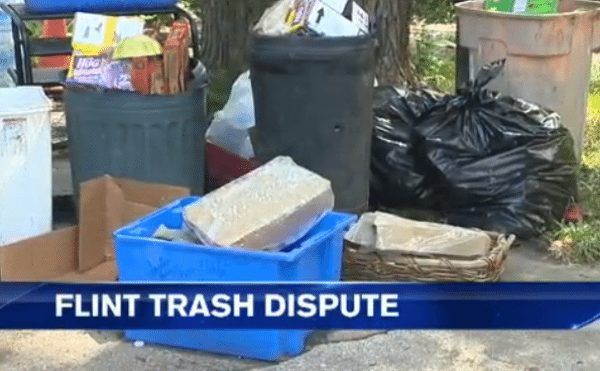 Long before the “Flint Water Crisis” brought national attention to the City of Flint generations of “Flintstones” at home and abroad worried about the path the city they love and call home has taken. Decades of governmental and societal neglect had already set in back in the 90’s, General Motors had long abandoned the city that helped make them a Fortune 500 company, and the state of Michigan seemed to have alternate plans for the second largest African American population in the state.

Lack of employment opportunities lead to a mass exodus from the city, according to the U.S. Census more than 20,000 citizens relocated between the years 2000-2010, causing two of the city’s Educational Institutions to shutter their doors Flint Northern and Flint Central.

As if the economic despair and toxic water were not enough for the citizenry to bare, City Council and the Mayor have decided to once again put their constituents in harms way with an act of civil negligence surrounding trash collection in the city.

Any reasonable person would believe, that the politicians who also live in the same environment would attempt to make sure the city would not have to suffer through any unnecessary hardships, but as usual, the elected officials are proving they do not hold the city in the same regard as those who put them in office.

According to MLive, the dispute stems from the city council’s decision to reject a new contract Mayor Karen Weaver hoped to sign with a company called Rizzo Environmental Services instead of the current trash collector, Republic Services. Members of the city council “questioned Rizzo’s ties to former Mayor Woodrow Stanley and potential ties the company may have in Canada,” as reported by MLive.

WJRT reports the City Council has issued a statement describing the decision to stop trash pickup as exclusively Weaver’s decision, but a legal battle is continuing over who will actually assume the contract.

In recent history, the only other American city that has been subjected to such bickering between Mayor and City Council was Gary, IN. In July of 2009 the Mayor and City Council of Gary, IN engaged in shenanigans, which created an 11-day halt in trash collection in the city. Similar to Flint, the issue that caused the stoppage was not financial despair because the city had the funds for trash collections, but the matter at hand was who would collect the trash.

The fact of the matter is I am sure that budgeting city services probably is not an easy task, however it seems that when these services become privatized contracts become somehow subjected to cronyism. Budgeting in general requires one major task which is to find quality services for the cheapest price, so the decision over who gets the contract should be cut and dry.

Vocation as an Expression of Your Soul

Four Tips for Dealing With Mental Health Needs in College

Four Tips for Dealing With Mental Health Needs in College