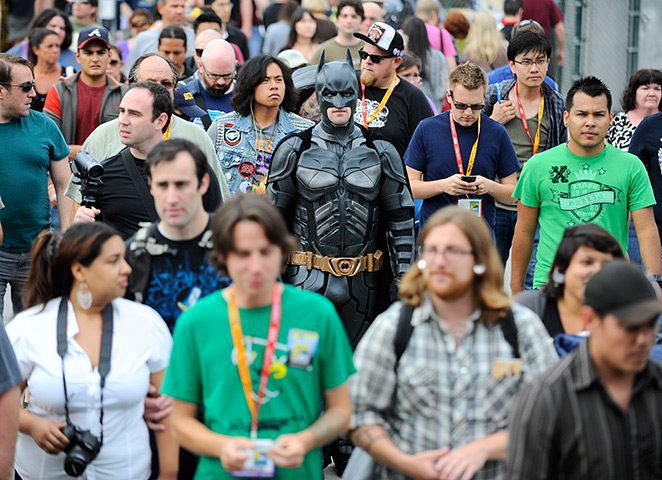 London Comic Con 2017 was a place of wonder, hype, and secret previews. Not least, a place for hands-on grappling with games and technology.

There were some very long queues (welcome to Britain!) for those waiting to play on the new Wonder Woman (2017) video game. Virtual reality headsets – namely, the PlayStation®VR – had to be pre-booked in advance. One could pose with a sword from Zelda: Breath of the Wild.

A huge section showed a live competition for the World of Warcraft card game HearthStone (complete with commentators and audience seating). That is not to dismiss other big-name titles such as the Tekken 7 fighting game, and Agents of Mayhem based on the violent Saint’s Row series.

In spite of this, there was also a very distinct trend away from these temptations. Comic Con provided a range of old-school arcade machines, playing the likes of PacMan, Sega’s Bubble Bobble, and old-school dance mats. Given the range of new offerings on show, why were so many people opting for the joy of the stick rather than the slickness of the headset?

One clear option is a sense of mastery and competence. It is clear that people will be better at old-school games that they have played for years, compared to new games with which they have yet to come to grips. But that cannot explain everything. Comic Con, whilst definitely a place for showing off one’s talents, was primarily a place of community and sharing.

Indeed, the arcade games were most often played in pairs, or with an “I can’t believe you have never played this!”. There were heated discussions about when, where and how people once played these games, what their high score was, and of course, a wider discussion about “the classics”. The physicality of the old technology appeared to ripple out a sense of genuine, unfettered and childlike delight.

Clay Routledge and colleagues argue that nostalgia – far from being a whimsical trip into the past (or indeed, a psychiatric disorder as it was once considered) – has an important psychological function. Namely, nostalgia helps to give our lives meaning, and also to enhance a sense of social connectedness. Often, nostalgia relates to something important or personally significant, and it can help buffer us against anxiety, loneliness, and threats. This latter point has been called “terror management”.

Arguably the world is a difficult and threatening place. News and social media make it easier to connect with others, but it has never been quicker to learn about the perils and injustices of the world. Communities, particularly in developed countries, have changed: traveling is becoming a norm, facilitated by long-distance communication methods and a more transitory job market. Long-distance relationships are more common, within families and within romantic partnerships. Whilst there has been debate about the extent to which these things help or hinder connectedness, it is clear that many of us are unsure of where we stand in relation to each other.

Technology also makes it easier to access the things for which we have nostalgia. Videos, pictures, images, online communities and even online shopping have put the wonders of our past within easy reach of our fingertips. As noted in our previous article London Comic Con demonstrated the importance of one’s personal history in geek culture, with many people linking their costume choices back to childhood or adolescence. Is it really a surprise that games are no different?

There is an important place for the new stuff – the shiny, groundbreaking stuff which bursts through boundaries like an over-powdered firework. However, there is also a crucial place for the older, more familiar stuff.

The next time someone criticises you for being nostalgic, remember to tell them that it’s not just “living in the past”. Nostalgia serves an important psychological function. It’s part of your wellbeing and sense of connectedness, not simply a throwback to immaturity.

So feel free to get back on PacMan when you finish this article – and PacMan with pride. See how smug you feel when you get that new high score.