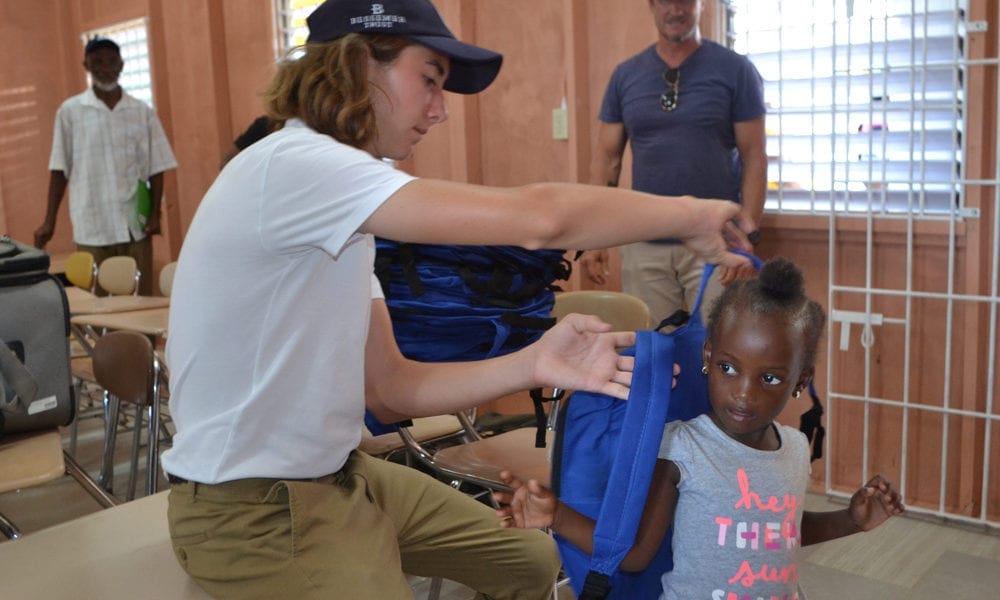 Thirteen-year-old Rafe Cochran of Palm Beach, Fla., returned to school this week as an eighth-grader at Palm Beach Day Academy after opening his second school built in Jamaica through Food For The Poor.

The new Runaway Bay All-Age School in St. Ann has six classrooms, an office for staff, and bathrooms with sanitation to provide more than 400 students a secure building as they returned to school this week. Dozens of parents, teachers, students, and community leaders gathered to meet and thank the young man who made their dream of a new school building a reality during the Aug. 31 ceremony.

“To give the gift of a second school in Jamaica is an honor and truly feels rewarding,” Rafe said. “The gift of education is so important to me because I feel education empowers one’s life. I also feel proud to have the doors of the Runaway Bay All-Age School of Determination open. It is a wonderful feeling knowing I have been a part of enriching other children’s lives.”

Runaway Bay was made possible by the Third Annual Rafe Cochran Golf Classic. Dozens of local golfers teed up for the charity tournament in April at the Mayacoo Lakes Country Club in West Palm Beach. Rafe began golfing at the age of 6, at age 9 he became one of Food For The Poor’s youngest donors, and at age 11 he hosted his first golf tournament using his talents to raise money to build homes in Haiti and schools in Jamaica.

“How many people can say that they have built 10 homes and two schools in two different countries by time they were 13 years old?” Food For The Poor President/CEO Robin Mahfood said. “Rafe’s philanthropic efforts are astounding and Food For The Poor is deeply appreciative of his generosity. Ten Haitian families now have safe and secure homes, and schoolchildren for generations to come will benefit from the two schools in Jamaica. We also want to salute Rafe’s parents for instilling these priceless values in their young son and for their support.”

The school’s principal, Lambert Pearson, and staff also expressed tremendous gratitude to Rafe, his parents and to Food For The Poor for coming to their aid after they had waited more than a decade for a new school, which will accommodate kindergarten to sixth grade. Pearson opened up his speech at the inauguration by singing.

“Thank you, thank you for all you have done… today my wait is over,” Pearson sang.

While in Jamaica, Rafe and his parents, Jay and Diahann Cochran, visited the first school. The family was happy to see Chester Primary and Infant School, also located in St. Ann, is well- maintained, the students are excelling, and that the school population has grown. The Cochrans helped to paint the exterior walls of Runaway Bay a cheery yellow, along with a calming blue and a bold red.

“Rafe has impressed his whole family and shown us all the deep compassion he has for others,” Jay Cochran said. “We believe that Rafe’s ability to look beyond himself and to help the less fortunate will undoubtedly influence the younger generations. Rafe is a remarkable young man –we can’t wait to see what he will accomplish in the future and the people he will touch with his generosity and compassion.”

In addition to donating hundreds of backpacks and school supplies for staff and students, the Cochrans wanted the new school to have a system in place to capture rainwater.

Rafe also did something that he hopes will motivate current and future students of Runaway Bay All-Age School.

As Rafe embraces the start of the new school year, he’s already entertaining the thought of future projects and the possibility of another school.

“I will continue helping one person, one family, and one school at a time in order to make a difference,” said Rafe. “I always say, you’re never too young to take action and make a difference!”

To learn more about Rafe’s Food For The Poor projects visit: www.FoodForThePoor.org/rafe