byDeona Hooper, MSW
in Education, News, Social Work
0
ADVERTISEMENT
Share on FacebookShare on TwitterShare on LinkedinShare on PinterestShare via EmailShare on Reddit

Sexual assault and fitness of character allegations have been raised against Supreme Court nominee Brett Kavanaugh in his bid to become the next lifetime appointee on the nation’s highest court. As a result,  conversations about due process, victim trauma, lack of reporting of rape and sexual assault allegations, binge drinking, and rape culture are happening in our schools, coffee shops, workplaces, and homes.

Professionals who are educated and trained in these areas have a responsibility to engage in thoughtful dialogue and help provide evidence-based data and information in order to prevent myths from cementing in the public sphere.

However, School of Social Work Dean William Rainford of Catholic University of America decided to exercise his power and influence by using a social media account representing the School of Social Service to provide his assessment of Julie Swetnek’s allegations against Brett Kavanaugh.

Attitudes like that of Dean William Rainford of @catholicUniv school of social work are what continue to keep survivors from reporting. This is unacceptable victim blaming and cannot be allowed. #WhyDidntIReport #IBelieveSurvivors pic.twitter.com/B8qsIng2NQ

This tweet among many others has earned Dean Rainford a suspension by the University. According to CUA student Tony Hain, Rainford issued a letter of apology “only after 45 graduate students walked out of classes Thursday in protest and after Rainford spent 24 hours defending and rationalizing his tweets on his @NCSSSDean Twitter account and dismissing faculty who raised direct concerns with him.”

SWHelper was provided with a letter from President Garvey who says he eventually plans to reinstate Rainford.  However, Hain asserts, “students, alumni and faculty have used appropriate channels to register concerns and complaints about him for years. Rainford continues to demonstrate a fundamental lack of understanding for the field of social work that he is supposed to lead. He is out of touch with his students, alumni and professional practitioners in the field of social work.  The tweets were the final straw. He must resign or be dismissed immediately.”

Dean Will Rainford of NCSSS @CatholicUniv issued an apology to his school community for tweeting that Julie Swetnick was not a victim of sexual assault. "I offer no excuse. It was impulsive and thoughtless and I apologize." Read apology here: https://t.co/TyOg2pctYd

Unfortunately, this is not the first time Dean Rainford has made negative headlines and angered students. In 2013, he unilaterally ended the University’s partnership with the National Association of Social Work (NASW) over their advocacy for women’s reproductive justice rights.

“In 2012, Catholic University of America joined a lawsuit with Wheaton College asserting the Affordable Care Act is a violation of the school’s religious liberty. During the conference call, Wheaton College President Dr. Phillip Graham Ryken and The Catholic University of America’s president John Garvey stressed their schools’ alignment on pro-life beliefs according to the Huffington Post.” For more information read full article.

Sarah Sorvalis, CUA Masters of Social Work Student Class of 2019, stated: “Dean Rainford is completely out of step with the NCSSS program. His comments violated every single one of the values that define the social work profession. This has unfortunately created an irreparable level of mistrust among students in my cohort.”

Sorvalis continues on a more positive note by stating, “There is a silver lining. Because of the stellar faculty and education we continue to receive, despite the Dean’s inability to be an effective and trusted leader, students have been taught how to organize and stand up to systemic injustices. In fact, these skills proved exceptionally helpful when coordinating our walk-out last week, as well as the student led protest on October 1st where we demanded Dean Rainford’s resignation.” 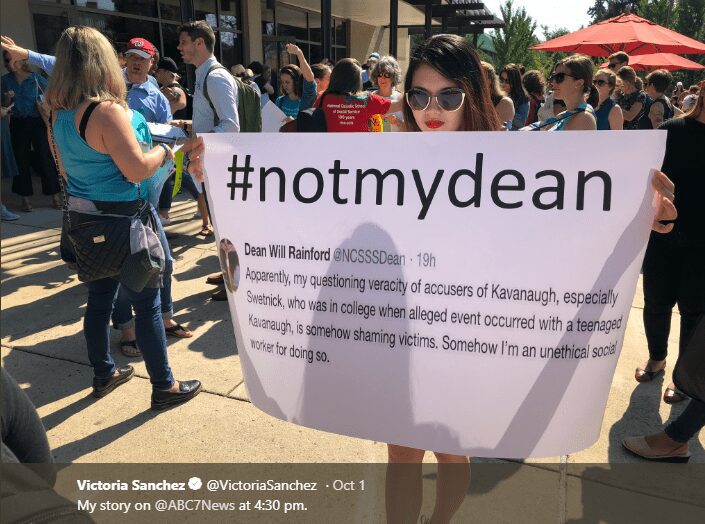 Although Dean Rainford has angered many students and alumni with his comments, he is not without supporters coming to his defense.

@CatholicUniv As a catholic & American I am appalled by the rhetoric of your president. In this country, people are to be presumed innocent not guilty. To shut down free speech for Dean Rainford is disturbing. By lying, Dr. Ford has set back the cause for all real abused women.

Dean Will Rainford suspended for his insensitive opinion yet @cchristinefair egregious/violent opinion is glorified? Pretty scary stuff… Now I don't know whether to suspend people for opinions or not but the hypocrisy is unnerving.

There is no doubt the country is divided into conservative and liberal camps. However, Dean Rainford’s tweets and past actions appear to be in service to his religious and conservative beliefs and not in service to students learning how to interact with the vulnerable populations our profession is tasked to serve. Social Work and social services are tasked with helping people in crisis and those affected by trauma.

We are mandated to remove our personal beliefs whether it be religious, political or any other kind from our interactions. We are tasked to provide information and assist people from all faiths, all nationalities and all backgrounds based on their needs, barriers, and challenges. If we can not set aside our personal beliefs to provide services, then we are mandated to refer them to someone who can assist them.

As a Dean of Social Work at a premier Catholic University, what message will this send to other victims who may find the strength to come forward in their Adulthood?

#WhenWeAllVote Wants You to Vote and Check Your Registration Status