One year after the death of Sandra Bland on July 13, 2015, the Huffington Post compiled a list of persons who died in jail. In the following twelve month period, there were 811 deaths, most of which were the result of suicide. In fact, 253 detainees committed suicide in the year after Sandra’s death, constituting 31% of all fatalities.

This heartbreaking statistic highlights a historical pattern; one of racial targeting and classism, poor management, health care oversight, and corruption. The criminal justice system fails our communities by allowing preventable inmate deaths while targeting the most vulnerable communities. These alarming trends in our prisons, jails, and juvenile detention centers have us wondering, why?

Experts examining suicide and death in our nation’s jails reveal disturbing trends across the most vulnerable communities. A recent New York Times article, for example, Preventing Suicide in America’s Jails, reveals in 2013 a total of 967 jail inmates died while detained in local corrections facilities. This statistic continued to grow the year after, even though the inmate population declined by 4%. Other authors and researchers cite poor management, inadequate health care, and perfunctory oversight as major culprits. Although these issues go mostly unresolved, they continue to institute a pattern of death and suicide. 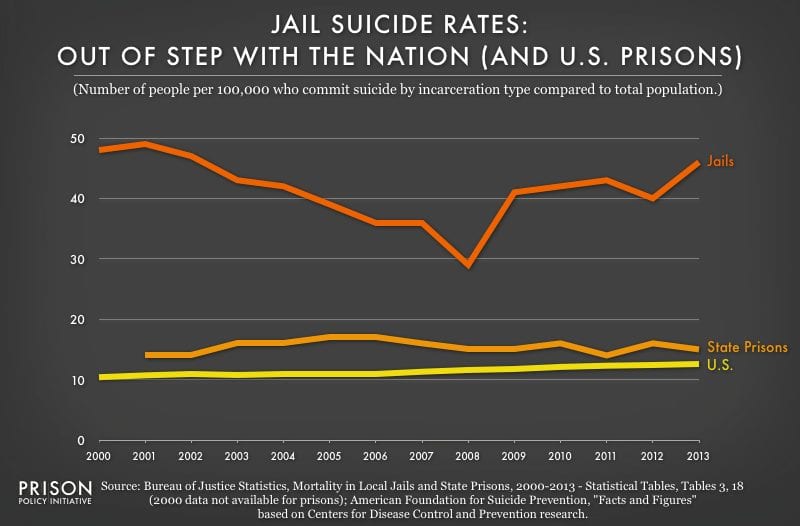 Many jail fatalities are overlooked and underreported. Generally, jails are not required to disclose fatalities occurring within their facility to their community. Even the most egregious incarceration centers can go unnoticed by the community at large when they aren’t being held accountable for deaths occurring in their own institutions.

Different from prison, jail stays are shorter (approximately 21 days) and most of the inmates have yet to be sentenced. Jail inmates could also be under the influence of drugs, alcohol, or have mental or physical health issues that correctional staff might be unaware of. For these reasons, many jail suicides occur in the first week of incarceration as indicated below by the Prison Policy Initiative. 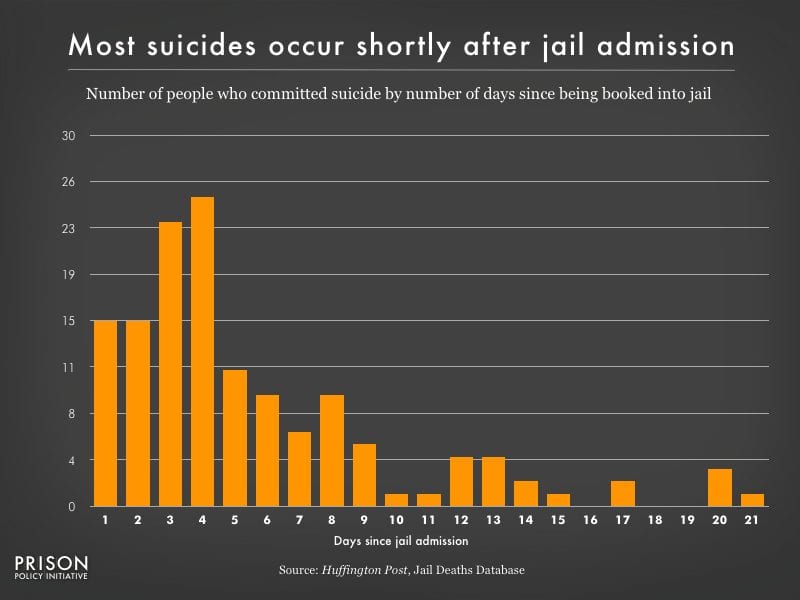 According to KyCIR’s reports in Kentucky’s Grant County Jail, rampant corruption, employee incompetence, ineffective staff preparation, and inmate maltreatment were all present in the jail’s culture. In an environment where accountability is minimal, inmates are more likely to be disregarded and mistreated, as is the case of Danny Ray Burden at Grant County Jail.

“Danny Ray Burden fell asleep mid-sentence as he was booked into the Grant County jail, toppling over on the bench where he sat. Prodded awake, he coughed, shook and pleaded for emergency medical attention. A blood test showed that the 41-year-old diabetic badly needed insulin. Instead of assisting with proper medical standards and medications, deputies put Danny Ray in a cell, where he was found unconscious just three hours after he had entered the jail on March 27, 2013. He died a week later.”

Reflecting on the data, including the specific cases of Sandra Bland and Danny Ray Burden, who is at risk for jail fatality?

Vulnerable groups at correctional facilities include:

Why Death by Suicide?

For inmates whose lives were previously difficult, a brief jail sentence could prove traumatic. The most at-risk inmates may be experiencing withdrawal symptoms, a lack of access to prescriptions, and/or low availability of medical or mental health services. An inmate with a troubled emotional, mental, or physical state of inmates suffers even more while imprisoned, especially when our system neglects their basic needs.

Correctional facility detainees may have anxiety about unemployment, broken relationships, loss of residence, healthcare, or the inability to care for children. Without financial resources, these issues are compounded by the inability to pay a bond. And for black inmates, especially those in the 18 to 29-year age range, accruing considerably greater bail amounts than their peers in other racial groups isn’t uncommon.

In Matti Hautala’s article In the Shadow of Sandra Bland: The Importance of Mental Health Screening in U.S. Jails, the author examines the multifaceted environment of our American jail system and garners evidence-based recommendations for inmate suicide prevention.

The author suggests the initial entry procedure, including the preliminary psychological evaluation, acclimates the inmate to the criminal justice environment. This experience could have a lasting impact on the immediate future for that inmate; although alternative programs such as parole, probation, or mental health courts are recommended. Community supervision, rather than incarceration, is especially effective for those with psychological or mental health issues. Further recommendations include:

The gross lack of culpability by local and state corrections personnel and increasing inmate deaths calls for advocacy and reform. Social workers, helping professionals, and concerned citizens must engage our political and community leaders in evidence-based dialogue and program development to reduce the number of inmate fatalities in our nation’s correctional facilities.

By engaging with our local communities and representatives, together, we can hold our system accountable. We can force our jail and correctional facilities to say “mea culpa!” and reform our policies to prevent tragic and unnecessary death.

Brick and Mortar Stores and Their Potential Demise

Brick and Mortar Stores and Their Potential Demise