bySWHELPER
in News, Youth
0
ADVERTISEMENT
Share on FacebookShare on TwitterShare on LinkedinShare on PinterestShare via EmailShare on Reddit 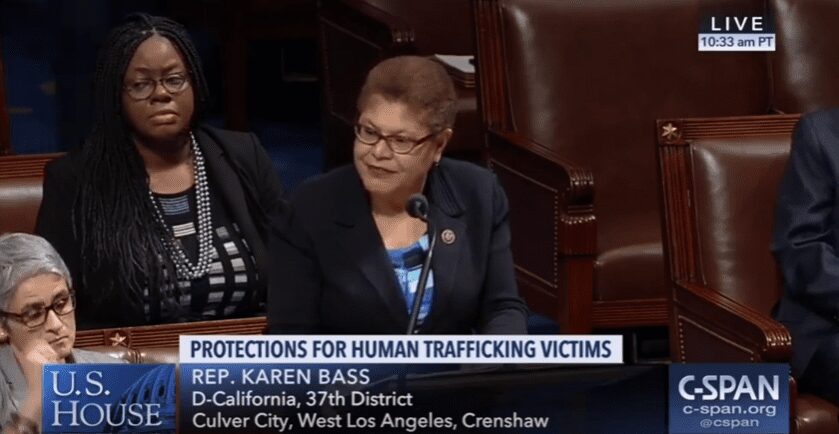 On February 7, 2019, Rep. Karen Bass (D-Calif.), lead the passage of the “Put Trafficking Victims First Act”, which ensures that survivors of human trafficking do not go unnoticed. The bill was approved by a vote of 414-1. Watch her remarks below:

I introduced H.R. 507, the “Put Trafficking Victims First Act,” with my colleague the gentlelady from Missouri, Ms. Wagner.

Ann, thank you for your hard work over the years on this important legislation.  We are here today because of your dedication and willingness to work, in a bipartisan manner, to address the problems faced by victims of trafficking. We both recognize that Congress must do more to combat this heinous crime.

HR 507 is designed to ensure that survivors of human trafficking do not go unnoticed.  First, it expresses the sense of Congress that law enforcement set aside a portion of the funds they receive for combatting human trafficking to ensure that victims receive support that is trauma-informed and victim-centered.  This will provide victims with a better chance of recovering from their experiences.

Second, this legislation addresses the tremendous need for expanded victim services, improved data-gathering on the prevalence and trends in human trafficking, and effective mechanisms to identify and work with victims in an effective and respectful manner.

It directs the Attorney General to form a broadly-representative working group to assess the status of the collection of data on human trafficking and recommend best practices, conduct a survey of survivors regarding the provision of services to them, as well as prepare a report to Congress on Federal efforts to estimate the prevalence of human trafficking, the effectiveness of current policies addressing victim needs, and analyzing the demographic characteristics of trafficking victims and recommendations on how to address their unique vulnerabilities.

With this type of information in hand, Congress can provide appropriate oversight of efforts to combat human trafficking, and researchers, advocates, and law enforcement agencies will all have a shared resource as they continue to develop innovative approaches to stop traffickers.

Finally, the bill expresses the sense of Congress that States should implement trauma-informed, victim-centered care for all trafficking victims.

Forced labor and human trafficking are among the world’s fastest growing criminal enterprises. Globally, these inhumane practices generate an estimated $150 billion a year in profit.  That’s three times the amount that the top Fortune 500 company made in 2016.  Criminals are profiting from the systematic abuse of vulnerable people around the globe. Sadly, women and girls represent approximately 71% of these victims.

The U.S. State Department estimates that between 14,500 to 17,500 people are trafficked into our country from other nations every year. These victims are part of the estimated hundreds of thousands of victims of trafficking, currently living within our communities.

My home state of California has the 9th largest economy in the world. It is also one of the nation’s top four destinations for human traffickers, especially for child sex trafficking.  In 2018, of the 5,000 reports to the National Human Trafficking Hotline, 760 of them were from California.

As the Founder of the Congressional Caucus on Foster Youth, I am very aware of the risk to vulnerable youth. Foster youth, along with runaways and homeless youth are at the highest risk of being sex trafficked.   Experts agree that the foster care system is yielding a disproportionate number of human trafficking victims.  Nearly 60% of all child sex trafficking victims have histories in the child welfare system.  We cannot allow this to continue.

Washington, DC is home to the most powerful government in the world. Yet, even in DC, women, and girls are being trafficked.

Tina Frudt, Director of Courtney’s House (right here in DC), asserts that African American and Latino communities are not immune to human trafficking. Her organization provides trauma informed services to sex trafficking survivors between the ages of 12 and 19.

Tina is also a child sex trafficking survivor.  As a 9 year old in foster care, she was sex trafficked.  By the time Tina turned 14, she became one of the 2 million children who run away from home each year. Nearly 200,000 of them will be sex trafficked.

In Tina’s case, her adult abuser was more than twice her age and forced her to become a child sex worker. It took her years to escape.  Now, Tina helps children, like her recent client, a 12-year-old girl, whose 25 year-old abuser called himself her “boyfriend” rather than her trafficker.

What’s more, survivors may face criminal charges, possibly even convictions for prostitution, loitering, or indecent exposure.  The threat of prosecution may lead trafficking victims to avoid contacting law enforcement for help, even as they face horrific trauma on a daily basis.

This bill is designed to ensure that survivors of human trafficking do not go unnoticed.  First, it expresses the sense of Congress that law enforcement set aside a portion of the funds they receive for combatting human trafficking to ensure that victims receive support that is trauma-informed and victim-centered.  This will provide victims with a better chance of recovering from their experiences.

Another component of H.R. 507 encourages law enforcement and prosecuting agencies to make every attempt to determine whether an individual has been a victim of human trafficking before charging them with offenses that are a result of their victimization.  This is of particular concern to communities of color. According to the FBI, African American children made up 57% of all juvenile prostitution arrest.

In Los Angeles, we changed how children were treated. Today, a minor cannot be charged with prostitution, which means children are no longer being placed in handcuffs when it’s the adults who are abusing them who are the real criminals.  There is no such thing as a child prostitute. I strongly support efforts to recognize children as victims rather than criminals.   In this bill, we encourage treating victims as victims and providing them with the necessary supports.

I am reminded of a case in Tennessee that has been in the news recently, involving Cyntoia Brown.

Cyntoia was only 16 years old when she was abducted by a drug trafficking ring, repeatedly drugged and raped, and sold to a child predator for sex.  In a moment of desperation, she fought back against her trafficker and killed him.  She, the victim, ended up with a life sentence.  Mercifully, Cyntoia was granted clemency last month, by the Governor of Tennessee after having served 15 years—for defending herself.   Victims of these horrific acts, like Cyntoia, should not have to hope for grants of clemency 15 years later.

Although much of the focus of human trafficking is on those who have been sex trafficked, those who have been trafficked for domestic labor should not be overlooked. There was a story a few years ago in The Atlantic entitled “My Family’s Slave.”  The author shared an intimate account of the life of a Filipina woman who for years was forced to work for a family as a domestic laborer in the U.S. from dusk till dawn.  An estimated 21 million men, women, and children are forced into labor around the world.  There are cases all across the United States.  We are working towards eliminating human trafficking in the United States.

Mr. Speaker, Congress’ intent is clear:  Protecting victims from the heinous crime of human trafficking is of utmost concern.  I am proud to have worked across the aisle with Congresswoman Wagner on this important legislation, and I urge our colleagues to support it.

Mr. Speaker, I reserve the balance of my time.

Mr. Speaker, H.R. 507 supports efforts to stop human trafficking.   We are making progress in protecting those who have been caught up in this horrific criminal activity, and this bill is a great example of what we can accomplish when we focus on helping the most vulnerable among us.

We have an obligation not only to end human trafficking but to support people who undergo horrific experiences like these.  This bill is yet another step in the right direction.

Once again, I would like to especially thank Congresswoman Wagner, for her efforts in this regard.  I was very pleased to team up with her again on this legislation and hope we can continue to work on these issues in the future.

For these reasons, I urge my colleagues to join me in supporting this bill today.