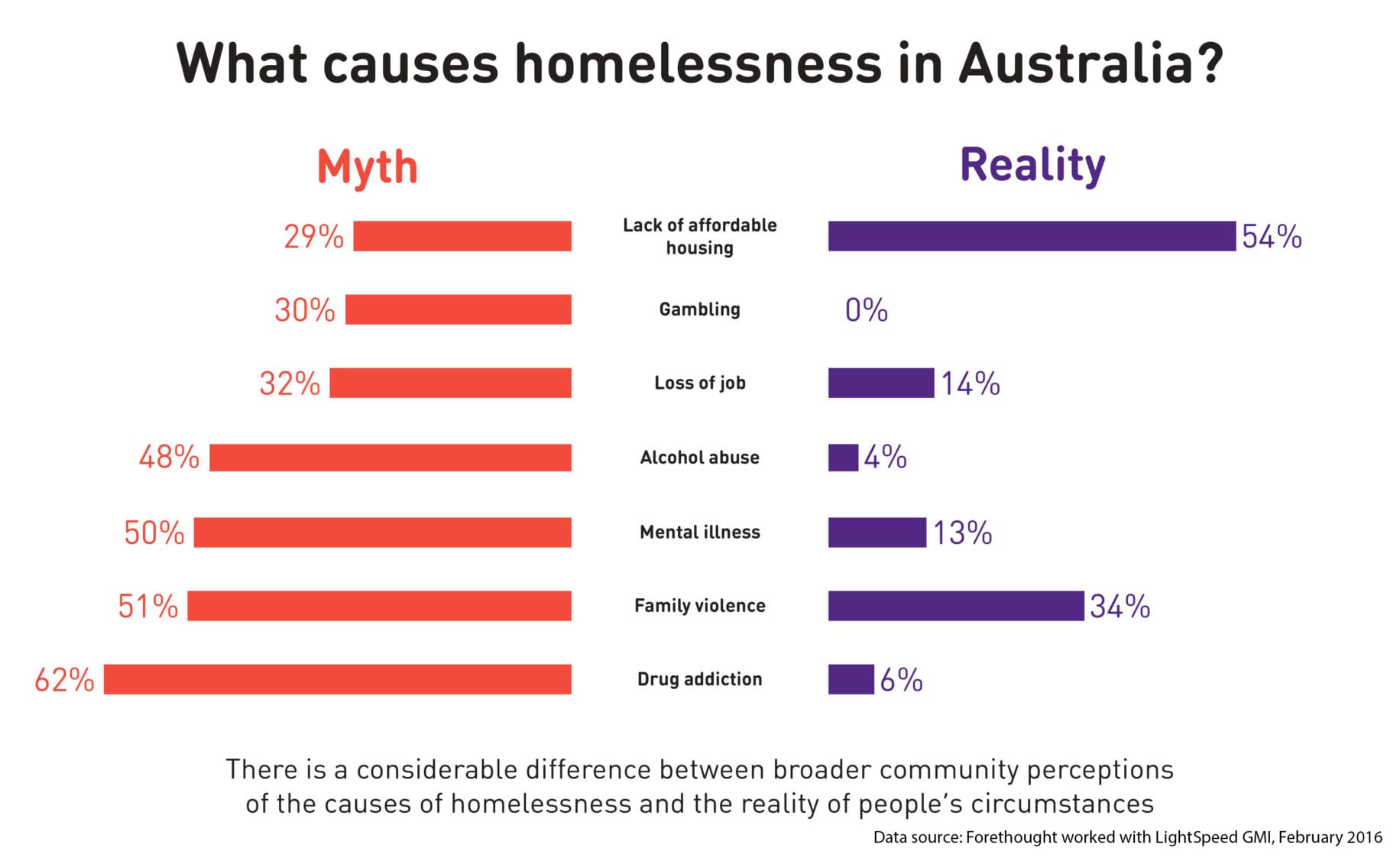 The history of homelessness in Australia stems back to our nation’s colonization by our British counterparts which moved Indigenous Australians out of their physical living structures. As Australia became more industrialized nearing the 1970’s, the contrast between homelessness and the rest of society become starker as the mainstream society had higher living expectations and standards which solidified what the disadvantage looked like.

Homelessness is an unspoken epidemic in Australia. It is not reported in the media and if you didn’t work in the welfare space, you would be blind to the number of people living in these conditions.

Homelessness was initially justified by ‘men being down and out of luck,’ however, as our societies ideas developed and matured, it became connected to more tangible and measurable practices. They were now associated with alcoholism, the plight of the individual, transience, and criminality. The common theme was that homelessness was a result of a failure which was only the birth of the stigma related to disadvantage in Australia which has influenced generations and engrained stereotyping of these groups as an acceptable practice.

These preconceived ideas can be understood with a sociological perspective, specifically examining the notions of status in society and what indicators determine that. Historically, status was inherited and determined prior to an individual’s birth (if we are observing the ancient civilisations, ie., the Caste system). Every ancient civilisation had a system to determine hierarchy, generally determined by education, political ideology, capital ownership, occupation, and material possessions.

However, it is always contextual in that the status is determined by how the individual is respected in the group/community they are a part of, ie., discriminating the status of a government minister amongst other government officials in comparison to commoners would result in a different level of respect. Determining status can be perceived as an adverse aspect of society, especially with a leftist view, however, it does maintain chaos and provide a vision which the lower classes can aspire too – it can be viewed as an indirect way to ‘tame’ societies and provide inspiration for growth – when used (and viewed) with this approach.

However, if we are looking at hierarchy in the context of homelessness, it only exacerbates the stigma. Modern society has far more progressed ideas then the ancient worlds and more recent historical periods mentioned above, yet, stigmatizing still exists and only hinders the level of equality which social workers advocate for.

Stigmatization links to capitalisation greatly, in that, society focusses on the individual as the curator of their fate, leaving the social structures which they exist in, blameless. What is left unaccounted for in the way homeless people are depicted in the media is the maldistribution of resources (such as employment, housing, nutrition, and health) in our resource dense nations with the premium lifestyle and experiences exhausted by the top tier classes of societies. It is also important to note that some people view homelessness as acceptable, we have become accustomed to accept that every society has an underclass and we ignore those groups which we find difficult and threatening.

The term ‘homeless’ carries a less-then-human quality; their conventional caricature embodies foreign qualities such as isolation and rootless of family and friends and human nature tends to reject those who disrupt the status quo.

A study undertaken by Chris Chamberlain outlines the traditional pathways which leads to homelessness. He theorises that either a housing crises, family breakdown, substance abuse, mental health or a difficult transition from youth to adult, are common circumstances for a state of homelessness to arise. Within these widely varying contexts, Australia has a multitude of service providers to support these people, so why are left un-accessed?

The answer to this comes down to the stigma which we associate with homeless people, which results in a complete separation from knowledge and access to these resources leading to a drop in self-worth/motivation. In western nations, the cultural priority and importance (and status) which comes with home ownership.

Academic research often appears to be neo-liberal in nature and commonly equates homeless to some sort of deviance or mental illness by disqualifying the societal issues which cause these situations. It’s almost as if we have justified homelessness – we do not see it as a short fall of society but more as the individual not fitting into the society we have built.

Simone is a qualified Social Worker and now works & lives in England. Working in the public sector for a local county, much of her work relates to mental health, homelessness & safeguarding, in a very front line nature. She can be contacted at sj.coop@hotmail.com