Medicare is a federally regulated social welfare policy that is funded from income taxes, monthly premiums deducted from Social Security, and Congress.  This policy specifically targets all individuals 65 and older, as well as persons with disabilities or permanent kidney failure.  It is estimated that there were roughly 50 million Medicare beneficiaries in the United States between 2010 and 2011, approximately 16% of the total US population.  Of those 50 million, 83% were eligible for Medicare because they were 65 or older.1   In fact, aging adults and their access to health care were the original motives behind creating Medicare. 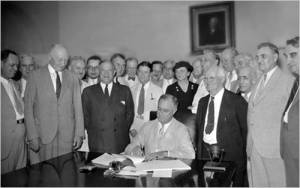 Concerns for the aging and their health started to become a national and political concern during the Great Depression of the 1930s.  During this time, elderly adults and their families were presented with an interesting dilemma.  Historically, children were responsible for the care of their aging parents.  Given the financial despair of this time period, however, individuals had fewer and fewer financial resources with which to support themselves and their aging family members.  Medical costs were consistently the main issue for the elderly and a conversation began to form on how the United States government could provide assistance in the face of this growing concern.2

The economic changes that occurred during the Great Depression also led to a shift in how social welfare was viewed.  As more people struggled against the weight of financial depression, more people became open to the idea of government intervention.  The establishment of the Social Security Act of 1935 by President Franklin D. Roosevelt brought about the creation of many social welfare policies.  This major piece of legislation also brought a new group of professionals to the political table: social workers.  Frances Perkins, Harry Hopkins, and Whitney Young were some of the major players involved in the creation of the Social Security Act, and their knowledge and experiences as social workers enabled them to help the president properly address the concerns of American citizens in need.   In fact, the ideals of equality took the United States by storm in the 1950s and 1960s as issues of civil rights took storm.  The general opinion of the public during this time favored a more liberal perspective with Democrats becoming the majority party, and it was this more liberal ideal that helped support President Lyndon B. Johnson’s decision to make Medicare apart of America’s social welfare system in 1965.

Several conservatives during the 1960s felt that Medicare – and the other welfare policies bundled within the revamped Social Security Amendments of 1965 – was a shift toward socialism and that it was not the place of our government to interfere in personal matters, such as health care and medical insurance.  Ronald Reagan produced a record titled “Ronald Reagan Speaks Out Against Socialized Medicine” in which he warns that Medicare will encourage other federal programs that “will invade every area of freedom we have known in this country.”3  Reagan also encouraged listeners to write to Congress or else “we will wake to find that we have socialism.”3  Physicians were also among the people opposed to Medicare, and they argued that Medicare would inevitably lead to a deterioration of care.  This argument supported the idea that the government had no place telling educated professionals of medicine how to best provide and execute health care.4  Despite the opposition and accusations of socialism, Medicare became a policy in 1965 and more than 19 million individuals aged 65 and older were enrolled in the program just a year later.

It can be easy to dismiss the history of Medicare because it is a program that most people have heard mentioned all of their lives.  Given the general public popularity of the program today, it can also be difficult to comprehend a time when Medicare was fought against and defined as socialized medicine.  The history of the program is important to consider because it gives us a better idea of the general framework of the program, and it also helps us to better understand how the policy and opinions of the policy may have changed over time.

Britney Wiggins is a student at Meredith College in Raleigh, NC, and she is working toward a degree in Social Work with a focus on aging and older adults.