byAlyssa Mareiro
in Action, News, Politics
0
ADVERTISEMENT
Share on FacebookShare on TwitterShare on LinkedinShare on PinterestShare via EmailShare on Reddit 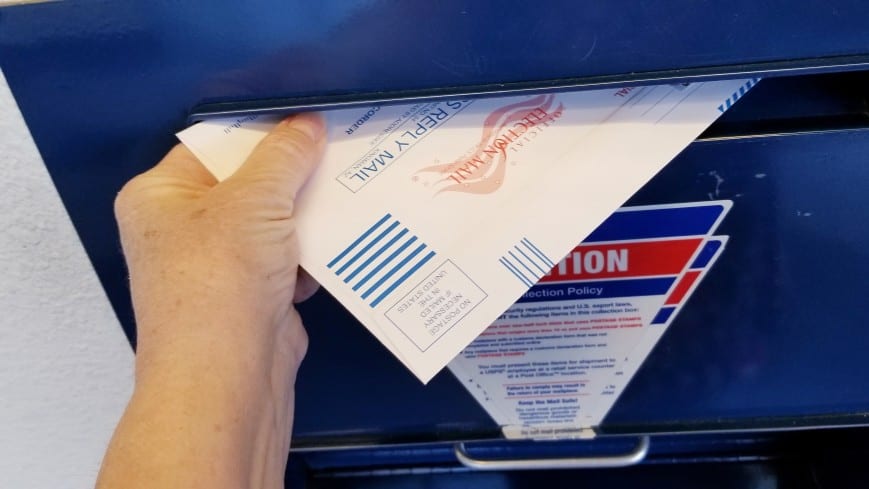 The first of three presidential debates touched on many hot topics, with President Donald Trump and presidential candidate Joe Biden having an impassioned debate over the integrity of the 2020 election. While President Trump has been very vocal in the past about voter fraud, he claimed that mail-in voting fraud is a particular concern this year. In addition to voter fraud, Trump also claimed that mail-in ballots are being thrown out and that the number of mail-in ballots will overload the systems currently in place for receiving and counting votes.

With the current COVID-19 pandemic, nearly 75% of voters have the ability to vote by mail for the upcoming general election. During the debate, as well as on twitter, Trump said that there are 80 million mail-in ballots being sent to people who did not request them and declared it “unfair” and “total fraud.” While a few states do automatically send out mail-in ballots to voters, there is no way that this would add up to the proclaimed 80 million ballots. The accusation of fraud by mail-in has been shown to be unfounded, and The Brennan Center for Justice has put together a compilation of independent and government research that shows that voter fraud is rare. How rare? Between 0.0003% and 0.0025% of votes in various past elections. In fact, from 2000 to 2012, there were only 2,068 cases of voter fraud, with only 24% of those being related to mail-in ballots. Despite his concerns, Trump has cast his vote by mail-in ballot in the past.

During the debate over the integrity of this year’s election, presidential candidate Joe Biden cited the FBI, whose director has said that there has been no evidence of any type of coordinated voter fraud. Biden said that mail-in ballots are necessary this year due to the COVID-19 pandemic, and reaffirmed the idea that they are safe and secure. Biden noted that people can still vote in person, and urged the people watching to make sure they do vote this year. He also brought up the fact that the military has been using mail-in ballots since the Civil War.

While mail-in voting has had a strong and lengthy history in the U.S. for military members, the process works a bit differently for the general population. All states routinely offer absentee ballots, often used by college students, military members, and others who are not able to visit their polling location on election day. Due to COVID-19, more than 30 states have allowed residents to request absentee mail-in ballots without a specific reason. There are also five states (Oregon, Washington, Colorado, Utah, and Hawaii) that have been regularly using all mail-in voting without issue.

Important – today is last day of early voting in:

If you haven't returned mail ballot yet, drop it off asap or make a plan to vote in person. It's too late to mail it back

This year, many people are not comfortable voting in person, with some studies showing that almost 50% of people are uncomfortable with the idea. This is to be expected due to the ongoing fluctuation of COVID-19 cases throughout the country. Another unique challenge that is impacting the voters of the US this year is the ongoing conflict between Trump and the USPS. Trump has admitted to blocking funding that the USPS needs to maintain its operations, and has mentioned “fraudulent” mail-in voting as part of his reasoning. People residing in states that are allowing absentee ballots due to COVID-19 are encouraged to request and return their mail-in ballots as early as they can.

On top of the barriers caused by Trump’s interference, many states have strict voter ID laws, registration rules, and few physical polling locations. Voter ID laws negatively impact already marginalized groups of people, including people of color, low-income individuals, and young people. Without an ID, you cannot vote, but many people do not have the time, resources, or funds to acquire a state-issued ID. In recent years, various southern states have closed a combined total of over 1,200 polling locations, further adding to the barriers citizens face when trying to cast their votes. The closed polling locations have predominantly impacted people of color and people living in low-income communities, which have seen the most polling location closures.

Mail-in voting can be beneficial for those who have seen their previous polling locations close, as well as people who may experience challenges voting in person. Although polling places are supposed to follow the guidelines set forth in the Americans with Disabilities Act (ADA), approximately 60% of polling places were inaccessible for people with various disabilities in past elections. People living with certain disabilities are also at higher risk for serious complications if they contract COVID-19. For these reasons, mail-in voting is an important tool that Americans living with disabilities need access to this year.

Mail-in ballots have been a part of voting in the U.S. since the 1800s, and they will continue to be an integral part of the election system for the foreseeable future. With more states moving towards all-mail voting systems, the evidence is clear – mail-in voting is safe and it works. Remember, over 30 states have allowed their residents to request absentee ballots without a reason, making it easier than ever to vote in the 2020 presidential election. You can visit vote.gov and select your state to find out how to register to vote and check your voter status.

Proud of you Mama!!! ❤️✊🏾👸🏾 And proud of everyone who is getting out there and voting for the first time and early! I love it!! 👑 #MoreThanAVote #TheShopHBO pic.twitter.com/AjRTaqGnt0

Make sure you check out your state’s specific voting page for accurate information on voting by mail, as it varies from state to state. If you live in a state that is not allowing you to vote by mail in this election, this website can tell you if your state requires your employer to give you time off to go vote in person. To make sure you have all the resources to vote, Michelle Obama, Tom Hanks, Lin-Manuel Miranda, Janelle Monae, Chris Paul, Faith Hill, and Tim McGraw created When We All Vote, which offers a Voter Resources Hub full of information specific to where you live. Knowledge is power, and this year, more than ever, it is important to know your voting rights and make sure your voice is heard in the 2020 election.

Alyssa (she/her/hers) is a staff writer for SWHELPER. She is a Master of Social Work student at Boston University with a clinical focus on mental health, public policy, and social justice. In her free time, she enjoys spending time with friends and finding new gluten-free spots around the city.