byCorissa Peterson
in Employment, News, Professional Development
0
ADVERTISEMENT
Share on FacebookShare on TwitterShare on LinkedinShare on PinterestShare via EmailShare on Reddit 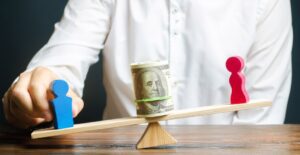 While there’s a discussion about how wide the gender pay gap currently is, there’s no doubt that it persists in 2021 and more significantly impact women of color. As a society, we still have a long way to go to close the gender pay gap, but knowing how to solve this ongoing problem is more complicated.

According to the most recent survey data from Payscale, in 2021 women still make just $0.82 cents for every dollar men make, meaning the gender pay gap is 18%. More specifically, this figure represents the opportunity pay gap which measures the ratio of women’s to men’s median wages.

How is the gender pay gap perceived?

To gain a clearer understanding of how the pay gap is perceived by Americans today, Resume Genius conducted a 500+-person survey. The survey aimed to uncover views on the gender pay gap, including how it compares to the racial pay gap, whether it’s been affected by COVID-19, attitudes about ways to help encourage equitable pay as well as the future of the pay gap.

In relation to the racial pay gap

When asked whether the gender pay gap or the racial pay gap poses a bigger problem in the United States, 52% of respondents agreed that both are a problem, while 28% said that neither is a problem.

Of the remaining 20% who indicated that one is a bigger problem than the other, 12% chose the gender pay gap and 8% chose the racial pay gap.

These results are consistent with Payscale’s findings that while men of color tend to earn less than their white male counterparts, men within each racial group still earn more than the women within the same racial group.

While the racial pay gap is significant, it’s even wider for women of color, with Native American and Hispanic women suffering the largest pay gap.

In relation to COVID-19

When asked whether the economic impact of COVID-19 has contributed to a widening in the gender pay gap, roughly a third of respondents said yes, while the other two-thirds didn’t think it played a significant role.

According to the Institute for Women’s Policy Research, the gender wage gap actually appears to have fallen by 0.7% during COVID-19.

However, this result is deceptive because it reflects the large number of low-wage earning women who dropped out of the workforce during the pandemic, rather than an overall increase in earned wages. Women of color have been the most severely affected, with disproportionately high numbers of unemployment.

While the current perception seems to be mostly that the pandemic hasn’t had a significant impact on the gender wage gap, it could take years to determine the real effects of COVID-19 on women’s wages. Many women have had to prioritize family and child care in the last couple of years, often at the expense of career growth.

What can we do to shrink the gender pay gap?

With nearly three-quarters of respondents in agreement that there is a pay gap problem, it’s clear that we need to find ways to close the gap. Two possibilities for improving equitable pay practices include fostering greater transparency around company pay practice and policy and encouraging women to seek the compensation they deserve by asking for raises and promotions.

Get comfortable with asking for a raise

Asking for a raise is common practice in the workplace and can be an important step toward building a successful career. However, men and women don’t receive equal treatment when it comes to receiving raises, whether due to bias, the motherhood penalty, or the “ask gap”.

According to an Indeed survey, women have grown even more uncomfortable with asking for a raise during the COVID-19 pandemic, contributing to an increase in pay inequity which will likely become apparent in the coming years.

Discuss your salary among peers

Disclosing salaries without fear of being penalized can contribute to a more open and equitable workplace.

Unfortunately, in American work culture, it’s long been taboo to discuss salaries and is frequently (illegally) discouraged by companies. The residual effects on employee comfort may impact our ability to move forward into a future of greater wage transparency.

Additionally, male respondents were 10% more likely than women to say they were comfortable discussing their salaries.

However, Gen Z respondents break from the general public on this topic. In fact, 47% of respondents aged 18-24 are comfortable discussing their salaries, compared with only 22% of respondents over 25 years old. This significant difference suggests that Gen Z may be poised to transform salary discussion culture in the coming years.

Most respondents agree that the gender pay gap will be negatively impacted by companies discouraging open salary discussion, with a greater number of women participants agreeing than men.

The future of the gender pay gap

Younger generations are also much more likely to say that the gender pay gap will disappear in their lifetime. One possible reason for this is that they will live longer, but it may also be due to optimism about the cultural shift toward equitable pay practices and greater comfort around wage transparency.

Estimates concerning how long it will take to close the gender pay gap range from 38 years in the US, to 250 years globally. No matter whose projection is most accurate, it’s clear we still have a long way to go.

Many of the problems that give rise to the gender pay gap, such as ingrained biases and a disproportionate burden of household and child care on women, are deeply entrenched social norms and will take time and sustained efforts to overcome.

However, the noticeable perception shift around openness and discussion of wages from Gen Z is encouraging and gives reason to be optimistic that the gender pay gap will close in our lifetime through the support of workplace transparency and fair practice.

Corissa Joy Peterson is a Content Writer and Resume Expert at Resume Genius & CV Genius, where she loves equipping others with the tools they need to pursue their dreams. She graduated from the University of Colorado at Boulder with a degree in Philosophy and a certificate in Peace and Conflict Studies.