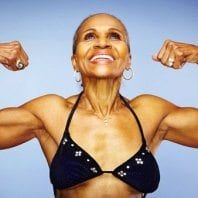 Who is old?  What does old mean?  Who decides that you are old?  Who do you identify as old?

My mother-in-law didn’t become old until she turned 90, while my mother decided she was old at 80. They self-selected when to be old. Meanwhile, my best friend who has a form of rheumatoid arthritis self-identified as old when she was only 55. So, it’s possible that old is when you need assistance with certain activities and realize that you are slowing in your performance. A 72 year old friend mentioned to me, “I can’t believe how much longer it’s taking me to walk to the office each morning. I used to be such a fast walker.“  Is she now old?

I am certain that my grandchildren identify me as old, while my peers tell me how young I look. Maybe that’s the answer. Old, like beauty, is in the eye of the beholder. My husband tells me I look as young as the day we met, which can hardly be true since that was over fifty years ago. Maybe we are old when our hair turns gray. Yet, I have a friend who went prematurely gray in her thirties.

Another answer might be that we are old when we start receiving senior discounts. I do have a senior Metro-Card that entitles me to use New York City’s subways and buses at half price. I have an AARP card, and I now go to movies and visit museums for senior admission rates.

Do all cultures and societies see “old” similarly?  Eastern cultures tend to value age and equate age with wisdom. Unfortunately, Western cultures put a higher value on youth. This causes many of the aging people I know to go to great lengths to appear younger than their actual age. I have an 85 year old constituent who came to see me one day carrying a large umbrella. “Is it raining?” I asked. “Oh, no”, she replied, but I refuse to walk with a cane.”

We, here in the United States and other Western industrialized counties, are experiencing a longevity boom. People here may not be perceived as old until they are in their 70s or maybe even 80s. Yet, in third world countries that are ravaged by war and hunger, people are perceived as old at a much younger age.

So, old may be determined by the place you live or the era in which you were born. My grandmother at 70 was an old woman. I am 68 and would not be described as an “old woman” by most people I know. Old can also be determined by one’s environment or the circumstances under which one lives. Those who live in poverty and those who are marginalized may not have access to good health care or healthy food. People who live in these minority communities are old sooner than those from middle and upper class majority neighborhoods.

So, it seems then that old is a socially constructed category. What old is to me may be different than what old means to you.

Are you old?  If so, when did you become old?  If you are not old, what makes you see someone else as old?  Why do you think a society’s definition of old is important?