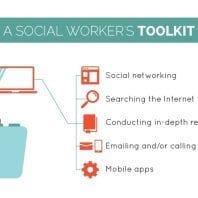 The world thrives on technology. We drool over the newest 3D televisions when they are announced, and pray to be the first person in line when that revolutionary new iPhone is released. Despite our desires for technology related to entertainment and fun, we thrive on technology for the conveniences it provides as well. Within the social work field, technology adds benefits to working professionals in numerous ways.

A Platform for Organization and Research
Who doesn’t love the feeling of being truly organized? It’s a breath of fresh air always knowing where you can find that specific contact info, or the prized website you found weeks ago with so many valuable resources. It’s easy to forget or to misplace physical documents, so the advantages of being technologically inclined are as convenient as they are efficient.

Another convenience that modern technology has brought to social workers is the research potential. Google Scholar and similar databases offer relevant information for research purposes, written by credible scholarly authors. The layout for these types of websites is extremely user-friendly. Accessing this information on tablets or even smartphones is simple.

But don’t be weary of new technology, despite your own level of understanding.

How should you feel about integrating these new ideas into your day to day work?

“Its time for you to learn! Social Workers should be tech savvy, if not experts. The time and cost it can save means more clients helped with less work for us. We work in a profession that is perpetually underfunded and over worked, and isn’t it time we come up with some solutions?”

In short, yes, it has been time for a tech minded overhaul for a while now. It’s all about utilizing the resources you have and developing a tech savvy mindset. You don’t have to understand complicated computer programs. Simply utilize technology.

The Application of Mobile Advantages
Smartphones have become tremendously popular in the world the last decade. It is estimated that one billion smartphones will be sold next year. The potential for mobile application is something that is always growing. It’s astounding that by 2016, the number of active smartphones is expected to outnumber humans on Earth!

With such a vastly huge number of smartphone users, the logical step for most career fields is to integrate smartphone apps into daily functions. Social workers want mobile technology because it’s useful as a means of always having information at your disposal.

Below are a few very useful smartphone apps that benefit those involved in all walks of social work. Pay special attention to the first example! :) 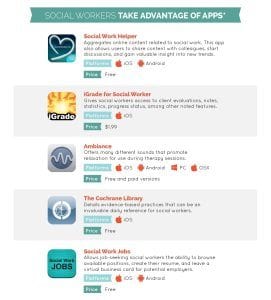 Benefits of Social Media
Social media campaigns help establish a presence for online counseling/social work endeavors. Social networking websites such as Facebook and Twitter were once completely optional, but are proving to be more and more essential.

Are you fairly new to jumping on board the social network bandwagon? Don’t fret, it’s as easy as modeling your ideas after something successful. Look at the Facebook page for Social Work Helper for example. Almost 90,000 people like the page, and the posts are regular and engaging.

Provide the viewers of your social network campaign with useful and interesting content. Avoid spammy and random posts. Be genuine; that will pave your road to a successful social presence. Technology aids social work in numerous ways. Through research, mobile applications, and social networking, social work efforts can skyrocket. Convenience and practicality will resound you, and you’ll never look back!

*Editor’s Note: The Social Work Helper app is currently not available for downloads. However, the app will be upgraded and back in the app markets soon. 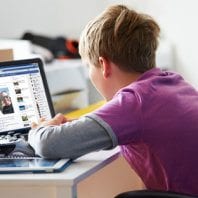 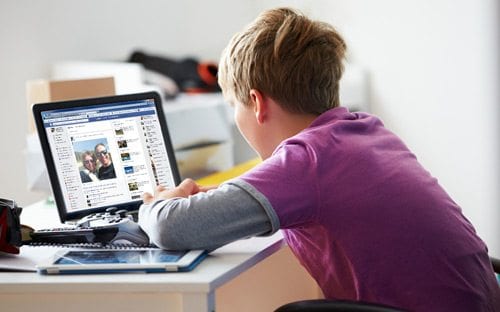 Most teenagers spend a substantial share of their time on Internet, often using social media, which have become a major means of socialising. Growing access to the Internet has brought about almost unlimited possibilities for children to access content and exercise their rights, including the right to receive and impart information. However, these benefits go hand in hand with growing risks for children of violations of their rights.

One important danger relates to the private life of children. Many teenagers use social media to post extensive information and photos of a personal nature, which will remain online for potentially long periods of time. This information can have harmful effects on their lives as it can be used by educational institutions or even potential employers in the future. The profiling of information and retention of data regarding children’s activities on Internet for commercial purposes also raises privacy concerns, to which children are mostly not sensitized.

Children also risk coming into contact with illegal or harmful content, which is increasingly available online, including pornography, but also racist and violent material, and content inciting substance abuse, suicide and other forms of self-harm.

Children can themselves become perpetrators and inflict harm on others through the Internet. Harmful activities include bullying of other children on social media, which is increasingly reported to helplines for children. This can lead to tragic consequences, as illustrated by recent cases where a number of teenagers took their lives after allegedly having been bullied and incited to commit suicide on ask.fm social media. Some children also circulate demeaning images (for instance of a sexual or violent nature) of other children, sometimes after forcing the latter to generate such images themselves.

The Internet is also used by predators to contact children under a false identity with a view to abusing them, including sexually (a practice referred to as “grooming”), and even to recruit them for trafficking purposes.

Identity theft is another danger, which was dealt with by the European Court of Human Rights in 2008 (in KU v. Finland). In this case, an advertisement of a sexual nature was posted on a dating site on behalf of the applicant, a 12 year old boy, without his knowledge. The Court held that, by failing to require the Internet Service Provider (ISP) to provide the identity of the person responsible for posting the ad, the respondent state had violated the boy’s right to respect for his private life.

What should be done?

Responses to these threats require efforts by parents and educators, the authorities of member states as well as private companies such as ISPs. These responses should include a mix of legal and practical measures respectful of the best interests of children and of their right to participate in debates on these issues and to be heard.

Giving children the tools to protect themselves against threats on the Internet and become more aware of their responsibilities is probably the most effective way of safeguarding children’s rights on the Internet. The right for children to remove their traces on the Internet and to be “forgotten” has been widely advocated. It is of course important that children are able to remedy the consequences of imprudent sharing of personal information, but it is even more important to act preventatively by raising their awareness about potential risks and long-term consequences of sharing personal information on the Internet. Many texts adopted by the Council of Europe and other international organisations over the last decade emphasise the crucial need for empowerment of children through education, including digital literacy. Children should also be able to identify, understand and deal with harmful content. Moreover, they should become more knowledgeable about human rights, including the right to freedom of expression and the right to privacy, but also the rights of others which they need to respect and be careful not to harm.

Educational programmes must target children, including at an early age, but also parents and other educators. More importance should be given to digital literacy in school curricula. Initiatives such as Insafe, a network supported by the European Commission to implement awareness-raising campaigns on e-safety at national level, are of crucial importance. The Council of Europe has also published an Internet Literacy Handbook. Research on children’s vulnerabilities on the net should be further supported in order to increase the effectiveness of education tools.

Creating a safe environment for children on the Internet:

Dealing with the dissemination of harmful and illegal material is a complex task. Deleting illegal material at the source is in practice very difficult because websites hosting such content can be located anywhere in the world, usually outside the scope of European cooperation.

Therefore, other tools are used in various countries to combat the dissemination of illegal material, notably child abuse material, often through blocking lists and filtering. The use of such tools is, however, controversial as it can lead to disproportionate restrictions to freedom of expression, in the absence of a clear legal basis, sufficient transparency and effective safeguards against misuse, including judicial oversight. Indeed, blocking imposed through ISPs has sometimes been extended to sites unrelated to child abuse, such as sites dealing with sexual and reproductive health. Some member states, under the pretext of protecting children, are blocking content related to LGBT issues, even though the European Court of Human Rights found that there is no scientific evidence that such materials have a deleterious impact on the well-being of children.

Moreover, blocking and filtering can detract the authorities from their duty to tackle child abuses as such. Perpetrators of child abuse, including those producing and disseminating illegal content and child abuse material on the Internet, are real persons that must be tracked and sanctioned, in application of international conventions such as the Council of Europe Convention on the Protection of Children against Sexual Exploitation and Sexual Abuse and the Convention on Cybercrime. Practices such as “grooming” should therefore be criminalised. Victims of abuses must be identified and rescued. States should also step up action against trafficking of children, in line with guidance provided in the European Convention on Action against Trafficking in Human Beings.

It seems more appropriate to use blocking and filtering tools at the level of private and school computers, using parental control, safe spaces for children on Internet and trustmarks and labels allowing for distinction between harmful and non-harmful contents. The German site “Netz für Kinder” is a good example of a website on which children can safely surf, learn and play.

Despite the existence of risks, Internet offers almost endless possibilities for children to learn, share, create and socialise. Therefore, it is necessary to generate more content aimed at imparting knowledge about human rights, which are attractive and adapted to different age-groups. International human rights institutions have taken initiatives in this respect, such as the UN Cyber School Bus or the UNESCO-ledD@dalos Education Server for Democracy, Peace and Human Rights Education. More needs to be done to prepare generations of active citizens committed to promoting and respecting human rights.