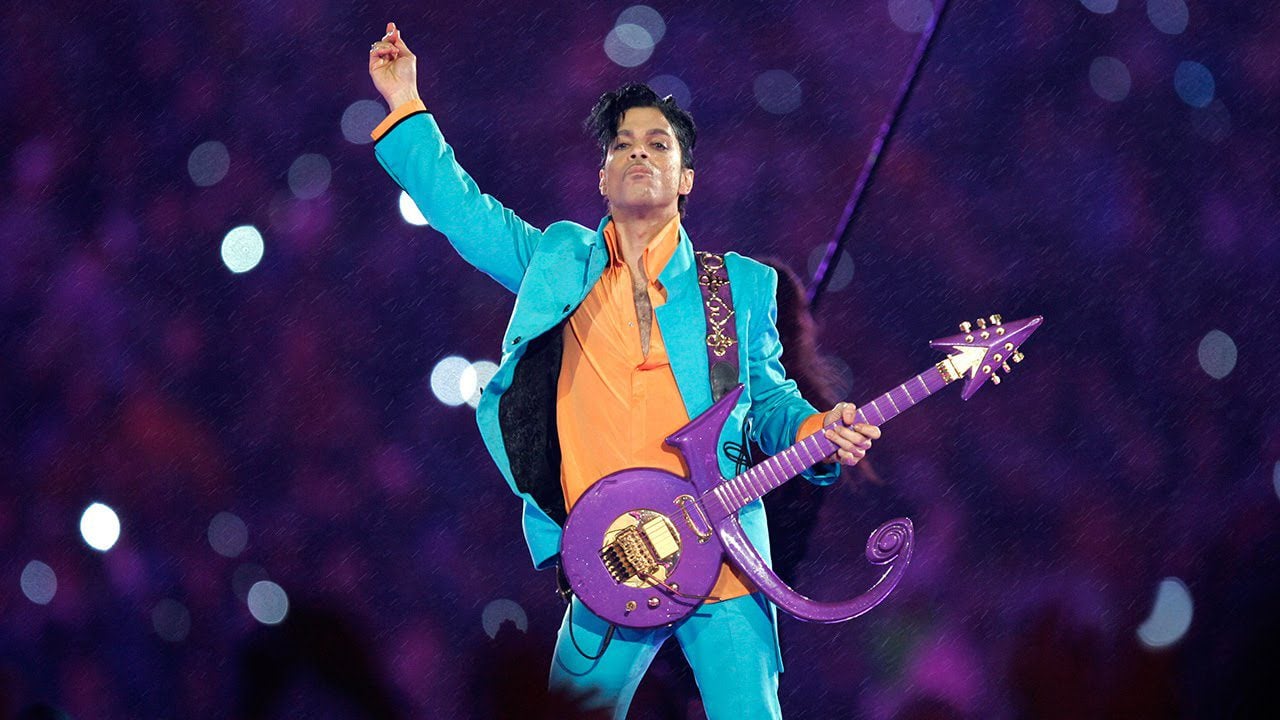 The death of a legendary artist and musician best known as, “Prince”, came as a sudden shock to the world on April 21, 2016. Prince released his first studio solo album at the age of nineteen and is known for his celebrated chart topping records such as “Purple Rain”, “When Doves Cry” and “Kiss”. Prince went on to sell over 100 million records, won seven Grammys and was inducted into the Rock and Roll Hall of Fame in 2004.  He undoubtedly touched the hearts and souls of millions with his music, style and personality.

Conversely, those closest to Prince stated that he left behind more than his music. Although, Prince may have shied away from publicizing his efforts, his ex-wife, Manuela Testolini, described him as a “fierce philanthropist” in a statement following his death.  Reverend Al Sharpton also commented on Prince’s philanthropic efforts. During an appearance on MSNBC, Sharpton stated, “What many people didn’t know is that he [Prince] would support many of our civil rights causes”.

After the 2012 shooting that led to Trayvon Martin’s death, Prince donated money to the Martin family. Trayvon Martin was an unarmed seventeen year old who was shot and killed by a neighborhood watch member, George Zimmerman. Trayvon’s tragic death sparked national controversy over racial profiling, which ignited conversations about race relations in the United States.

The extent to Prince’s passion, with regards to racial and social issues, was apparent in the Grammy Awards in 2015, when Prince presented album of the year and made the statement, “Albums still matter. Like books and black lives, albums still matter – tonight and always.”

In this statement, Prince was referring to the Black Lives Matter movement which was stimulated by the 2014 police killing of an unarmed Michael Brown in Ferguson, Missouri. He donated $1.5 million through a charity concert that donated to Black Lives Matter and other social justice organizations in line with the message.

Is this the extent of Prince’s philanthropic involvement?

In an interview with CNN, activist and close friend, Van Jones stated that “he’s [Prince} a humanitarian, first and foremost”.  Jones and Prince were recently working on organizations such as: Green for All, which creates green jobs in disadvantaged communities; #YesWeCode, an organization with a mission to educate 100,000 low income youth about technology; and Rebuild the Dream, a movement that seeks to raise awareness on issues such as excessive incarceration, student loan debt and racial injustice.

Prince’s generosity does not end there.

After a show in 2011, at the mayor’s request, Prince donated $250,000 to Eau Claire Promise Zone, an organization working to help preschoolers and their families in struggling neighborhoods in north Columbia, South Carolina. He also donated $1 million to the Harlem Children’s Zone, a non-profit organization for poverty-stricken children and families living in Harlem and $250,000 to the Uptown Dance Academy when he found out they were going to lose their space back in 2011.  He also supported City of Hope, the Elton John AIDS Foundation, the Jazz Foundation of America, The Bridge, Urban Farming, H.A.L.O., the Edith Couey Memorial Scholarship Trust Fund, the Elevate Hope Foundation, and the Goss-Michael Foundation.

Prince’s humility and faith as a Jehovah Witness did not allow him to speak publicly about his humanitarian efforts. Although, it was through his music, charitable giving, and way of life, which inspired others to believe in hope for justice and opportunities.  His creativity and boldness knew no bounds, as he demonstrated genuineness through his messages and actions. Prince’s ability to master his art has impacted multiple generations around the world for nearly four decades. There is no doubt that even after Prince’s sudden death his legend to inspire hope for the oppressed will live on 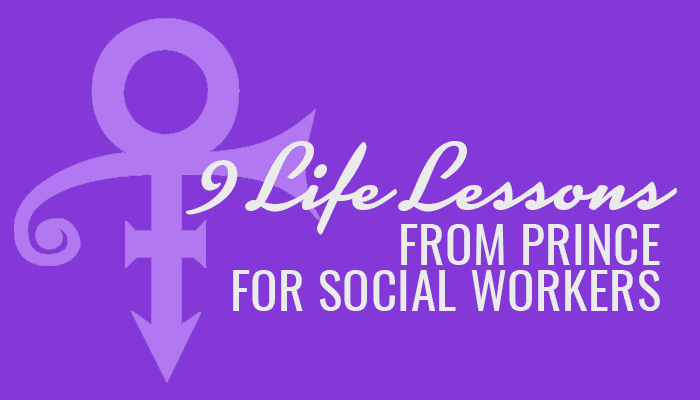 I’ve been a little obsessive this week. This is apparently how I mourn when one of my favorite musicians of all time dies: I listen to their music. On repeat. Nonstop.

My Four Year Old Daughter: Daddy, is that a Prince song…again?

Me: Yes, sweetie, Daddy needs to listen to “Sometimes It Snows In April” one more time. (Nice tribute D’Angelo.)

Since Prince’s sudden death last week, I’ve thought a lot about his life and career. Then it hit me like a bucket of “Purple Rain”, we could all learn lessons from Prince’s life. Today, I’m going to share nine life lessons social workers can learn from how Prince styled his life.

Lesson 1: Create your own path

Prince style: Prince’s career was known for a lot of things: his music, his attitude, and his eccentric style. He was naturally influenced by musicians and artists who came before him, but he didn’t seek to copy anyone person.

Your style: Talk to other social workers and professionals whose lives and careers you respect. Resist the urge to try to follow exactly in their footsteps. It just doesn’t work. What does work, is taking the best parts from your mentors and influences.

Lesson 2: Develop more than one skill

Prince style: It didn’t matter the instrument: lead guitar, bass, drums, or piano, all were in Prince’s wheelhouse. On his first album For You, Prince played every instrument in each song.

Your style: You may not be a multi-talented musician, but you still need to have a variety of skills at your disposal. Be ready to “play” all of them at once when needed: be an active and empathic listener, a human Wikipedia of community-based resources, and a tireless advocate for your client.

Lesson 3: Advocate for yourself

Prince style: He famously (and legally) changed his name to a symbol a.k.a. The Artist Formerly Known as Prince. His reasons for the name change, in part, were to protest Warner Brothers unfair contract withholding the master copies of his music.

Your style: Social workers are charged to advocate for underserved and disenfranchised populations. But don’t forget about yourself. Example: If you think social workers are undervalued, disrespected, or underpaid… Do Something About It.

Prince style: One of the most famous songs of the 1990s was Sinead O’Connor’s “Nothing Compares To You”, written by Prince. He didn’t keep that remarkable gem of a song to himself, he shared it and it benefited, even more, people.

Your style: Be as generous with your abilities. Your influence on the world moves beyond your circle of influence when you teach and share your talents. Teach and share with other social work colleagues where you are skilled, so that they may, in turn, help others.

Prince style: Prince may have been only 5’2” tall, but he wasn’t short on confidence. His strut was legendary.

Prince style: Prince traveled the world playing his music, but always returned to his home base. Prince was born and died living in the great state of Minnesota. He was deeply connected with the residents there and the state loved him for it.

Your style: Whether you are living in the same place you grew up or you have moved off, stay connected with the people and community that helped shape who you are today. For example, go back and talk to students from your high school about how to become a rockstar social worker.

Prince style: Prince could command a stage solo like few others. But he was perhaps at his best when collaborating with other musicians. He was intentional about having diverse bands, especially using female musicians. His concerts were no different. Old and young, black and white, gay and straight…people from all backgrounds came together for Prince.

Your style: Don’t be a lone wolf social worker. Find colleagues in other disciplines who share your perspective and passion for helping others. Identify ways to collaborate with those professionals.

Prince style: Be known for something. It’s hard to see a deep purple color and not think of Prince.

He had his own color . . . who has their own color? He owns purple. – Jimmy Fallon

Your style: You may not be able to call dibs on a color of the rainbow, but you can brand yourself in other ways. For example, Brené Brown is known for her books and research on shame and vulnerability; that’s her thing. Find your “thing”and be known for it.

Lesson 9: Create a will

Prince style: As I’m writing this article, news outlets are reporting Prince neglected to create a will for his estate. (Jaw drops, face meets palm). This is what you would call a teachable moment.

Your Style: You may not have millions of dollars of assets like Prince, but you still need a plan for your stuff when you’re gone. A legal will isn’t about you, but rather the people that are left to sort through your affairs. Do them a favor.

Whether you are a fan of Prince’s music or not, you have to respect his creativity, boldness, and authenticity. His life and music clearly impacted many people, myself included. We may not make a Prince-sized impact on the world, but we can learn from his example in how we leave our own legacy. So dearly beloved social workers, let’s get through this thing called life together.