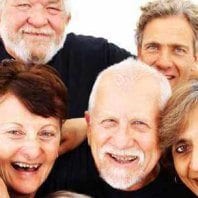 New York-The Radical Age Movement held its first public event last evening at the New York Ethical Culture Society.  One hundred people came out in the freezing cold to hear about what it takes to “leverage the power of age”.

The evening began with a welcome from Dr. Phyllis Harrison-Ross, Chairperson of the Social Service Board of the New York Ethical Culture Society.

Alice Fisher, founder of The Radical Age Movement, then talked about the need for people who don’t like the way that old people are portrayed and regarded in what she described as the “youth oriented culture of the United States” need to speak up.  Alice told of her deep interest in longevity and its multiple effects on society and how this led her to the founding of The Radical Age Movement.

“I came to the realization that the extra years many of us will be living are not tacked on to the end of our lives.  Rather, a whole new stage of life has opened up along the life span, and those are people between approximately 60 and 80 years of age who are still a vital and relevant part of our society.”  “We”, said Fisher who is 69 years old, “are not ready to throw in the towel.”  After being asked, “how do you change an entire culture”, her response was “with a movement.  It’s the only way we’ve ever done it.”  Right then and there the seed for The Radical Age Movement was planted.

After working for over a year with a small 10 person steering committee and launching a website a few months ago, The Radical Age Movement was ready to come out.  “When people leave their career positions, whether by choice or not by choice, they walk into a void”, she said.  “There is no role for us in society, unless we want to accept the description of old just because we are collecting social security.”  People of this age, although older, are not ready to be consigned to the rocking chair. “Nobody even knows what to call us.  Sometimes we’re the old boomers or the young seniors.  We don’t even know what to call ourselves”, said Fisher.

The original agenda for last evening’s event included a participatory demo of what it is like to be part of an age-oriented consciousness raising group.  Not expecting such a large turnout and without enough facilitators to guide the number of groups that would be necessary to run this part of the program as planned, Radical Age decided to let the program run with interactive discussion.  After a presentation about ageism by Joanna Leefer, 65, a care-giving consultant, three people gave personal testimony about their own confrontation with ageism, while two others testified to the effect that participating in consciousness raising around the topic of age has had on the way they are experiencing ageing.

Corinne Kirchner, 79, who is a sociology professor at Columbia University and  who experienced two strokes in her 70’s, talked about the way that people constantly try to give her too much help.  She described Thanksgiving dinner where a nurse who was a guest at the dinner followed her around, prepared to catch Corinne should she fall. Understanding that the nurse was trying to be kind, Corinne was very polite but “inside I was so angry that this person was treating me like a child learning to walk.”

Hope Reiner, 70, the founder of “Hope Cares”, a companion service that provides one-on-one stimulation, socialization and engagement to older adults, talked about her abrupt dismissal from the consumer magazine publishing world where she worked for over 33 years. “Despite the magazines’ high ratings and high revenue and my standing as the #1 salesperson for much of that time”, she told the audience, “my career ended. I can only assume my dismissal was based on my age.”

Next it was Rodger Parsons’ turn to talk about his personal experience with ageism.  Roger, 68 years old, does voiceovers for Radio, TV, Cable commercials as well as author voiceovers for other venues. He spoke about how ageism is especially relevant in the Voice Over world and ways of dealing with it. “It is especially important to confront situations as directly as possible to get outcomes that make it clear that access to work should be based on the talent of the performer not the performer’s age.”

After each of these testimonies, lively discussions from the audience ensued. People shared their own experiences or commented on the testimony they had just heard.

Alice then took the podium and gave a brief description of the consciousness raising process that The Radical Age steering committee has been using. “The one advantage to participating in this process”, she said, is providing participants the space and time to examine our own ageist tendencies”.  “After all”, said Fisher, “we did grow up in this youth oriented society.”  The Radical Age Movement is developing a guide for people who want to start their own consciousness raising group around the topic of age.  This guide will be posted to The Radical Age Movement’s website, www.theradicalagemovment.com, in the coming weeks and be distributed at their next event on February 21st.

Barbara Harmon, 72, a speech language pathologist, and Jon Fisher, 70, artist and real estate broker, then testified to the changes that participating in the consciousness raising process has made for each of them.

Barbara spoke of how she came to accept the graciousness of those who offer her seats on crowded subways after coming to the realization that her own ageist attitude was getting in the way of her being able to accept aid when offered.  “Accepting a seat acknowledges the fact that my age is recognized; but because of the discussion and support of my peers, I now feel comfortable with the recognition”.

Jon talked about his career in the ad business where everything had to be new and fresh, including the people.  “I had the mindset that I had to look, act, and feel young; and I carried that with me into my personal life.  When I was invited to join the consciousness raising group, I really didn’t think that my ideas about ageing would ever change.  Now, I also feel more comfortable in my age.  The consciousness raising process has made a major imprint on who I am and who I am becoming”.

Remarks and conversation continued until it was time to leave.  Alice asked everyone to take a save-the-date for The Radical Age Movements next event on February 21st.  This will be a 4 hour workshop entitled “The Age Café.”  Through this process, those who attend will have the opportunity to help plan Radical Age’s agenda going forward.

Reacting to Alice’s expression of disappointment at not being able to proceed as planned, one attendee said that  the evening was one huge gestalt consciousness raising session.  Another comment by a member of the steering committee was, “I think we have the start of a real movement here.”  That expression was echoed by many who attended the event.