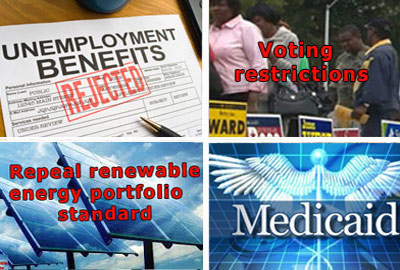 What happened to the progressive state we once knew here in North Carolina?  This state of ours, which was once on its way to becoming progressive, has turned completely bizarre in its direction.  There is a plethora of policies in our current legislature that discriminates against many of our vulnerable populations. Here are just a few of them:

This has flourished many advocacy efforts throughout the state. With lobby days already scattered out at the Capital such as, Women’s Advocacy Day , Equality NC Lobby Day and Momsrising Chutes and Latters event, there are many more rallies and citizens advocating all of the madness that is going on at the legislature this session.

These policies are going backward in time for our state. Our laws should protect our freedoms and stop discrimination. If you don’t agree with these policies, please contact your representative.

Is Disability the New Welfare