Family and Maternity Leave Around the World: How Does the USA Measure Up? 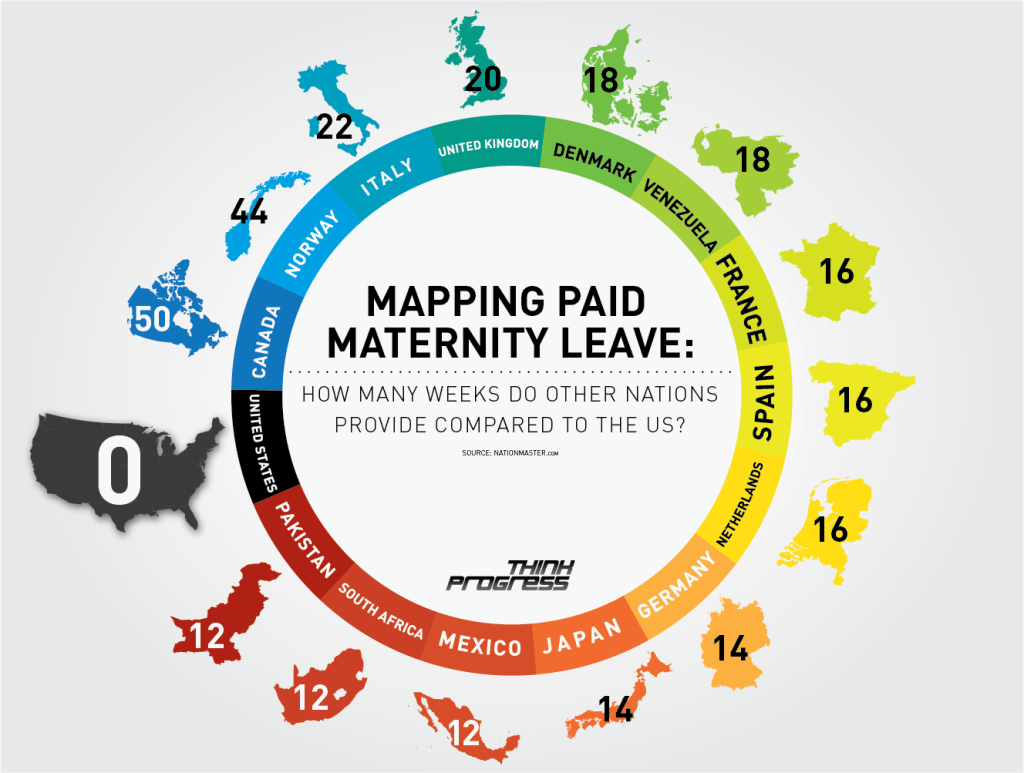 In the last few decades, women have been dominating the workforce because having a single income family is no longer enough to maintain a middle class living. More importantly, women enjoy and want to have careers and be contributors in the workforce. However, women have increasingly faced challenges in balancing work with parenthood especially with the lack of paid maternity leave.

This imbalance has created a need for substantial policy in areas such as child care assistance, reproductive rights, and family medical leave. Women who become pregnant have to take time off work for recovery time, doctor visits, and to allow appropriate time for mother and child to bond. Due to the high expense of daycare,  many women cannot afford to work full-time and being to cover day care expenses.

Often daycare expenses cost higher than what the average working mother will earn in a 40 hour work week. This cost analysis and barrier prevents many families from rising above the poverty level. In addition,  many women, married and unmarried, often have the burden of the “ unpaid second shift” which is taking on many of the domestic duties at home as well.

Some of the policy changes around the world came as a result of needed parental leave and a preschool provisions for children until the age of six. Germany and France were two of the first countries to get maternity leave. Currently, 128 countries provide paid and job protected child-birth leave. The primary factor which determines the way a country or state gives this benefit varies from place to place. However, it is important to note that some places provide longer leave times than others. For example, the United States has largely decided to make the majority of maternity leave in this country unpaid.

It is disconcerting that the US and Australia are the only two countries that offer no federally mandated paid maternity leave. This is a huge barrier for families and single parents raising children. Notably, France is one of the countries that has provided the most benefits for women on maternity leave such as increased leave when having more children. For example, the child rearing benefit is more if they have more than two children.

The way the a state or country attacks these problems tells provides great insight into how they value maternity leave and child rearing. Out of all the countries studied, the United States lagged behind all others in the support and balance they give to families.  Daycare was another benefited proved by many as a public services in countries like Germany. While many of the OECD countries provide this daycare regardless of income, the US only provides assistance for the abused and low-income.

The policies of Sweden and France are able to help provide women the ability to balance family and work. Whereas in the US, there are a large number of children at the poverty level due to policy decisions that do not support women and children post birth. Because of the lack of assistance in the United States, many women in single and working class families cannot afford to have day care, unless there is some subsidized program they can participate in.

Many women are forced to limit the time they work until their children begin school age. Public awareness on this issue needs to be increase in order to promote more advocacy and policy changes in these areas. Write your representatives on this matter, go in groups to speak to legislators, and set up community awareness events in your community.

I think the United States could learn from many of the policies and practices of countries like Sweden and France. This would give us the same opportunity to work full-time and pursue the American Dream. I think these countries as well as the other countries in the OECD have done a far better job to address the gender differences of women and men. As far as the United States, I feel that our policy makers have let us down. It’s unfortunate that many policy makers do not realize that addressing these issues affecting women would be the best policies to uplifting everyone.

Positive Ageing: The Role of Social Work from Cradle to Grave

"Dumping" the Homeless In America