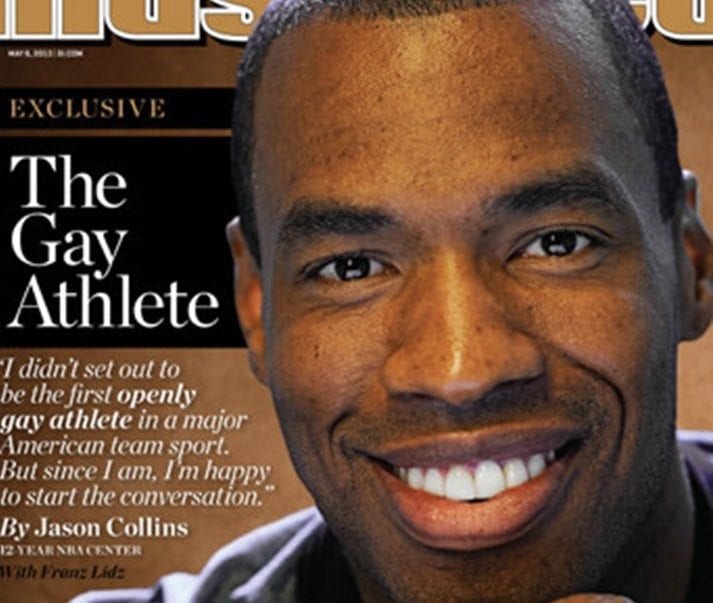 Current NBA free agent, Jason Collins, took the world by storm earlier this week after becoming the first major sports athlete to announce that he was gay. Collins has been in the NBA for 12 years, and no one ever knew of his sexuality until Monday. When the story broke, Collin’s instantly became a household name. As everyone knows, the gay and lesbian rights issue has reached new heights in today’s society.

It’s truly amazing that no athlete has ever come out to admit that they were gay while being an active player. Most sports figures are seen as the toughest men in the entire world. You wouldn’t think that any of these rich and powerful men would have reason to hide anything from anyone. The truth is, there are more players like Jason Collins who are indeed afraid to speak out about their sexuality. That’s what makes it so special that this man stood up, before anyone else, and became a leader for gays across the world.

It’s comforting to see someone in Collins’ position be able to do what’s right despite possible retaliation. Jason received a ton of support including current and former, NBA and NFL, players. Kobe Bryant tweeted “Proud of @jasoncollins34. Don’t suffocate who u r because of the ignorance of others #courage #support #mambaarmystandup #BYOU”, and more sports figures are offering more support each day. Collins’ act of bravery is respected highly. All of the support he receives will make it easier for the next person who refuses to hide their sexual orientation. This was a very brave act by a man with nothing to gain and everything to lose.

We as people should continue to get behind others like Jason Collins. There are more people out there who are hiding and afraid to be criticized. As a nation, we need to stand behind individuals like Jason Collins, and let them know that we support their ability to live their lives without persecution.

Jason Collins surprised a lot of people especially when he didn’t know what type of responses he would receive. However, he still managed to muster up enough courage to come out and openly admit his sexual orientation. Hopefully, his courage will inspire more athletes in the LGBTQ community to be unafraid to let everyone know who they really are.

May Day, an International Affair

North Carolina College Students say “We are Taking Our State Back”

North Carolina College Students say "We are Taking Our State Back"