North Carolina College Students say “We are Taking Our State Back”

byLydia Long
in Education, Local, News, Politics
0
ADVERTISEMENT
Share on FacebookShare on TwitterShare on LinkedinShare on PinterestShare via EmailShare on Reddit 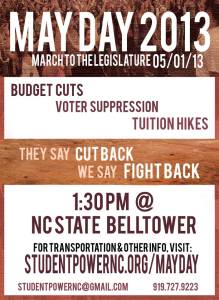 Following the end of the march, several forward thinking speakers spoke on the backwards takeover by the new right-wing government formerly known as the North Carolina State Legislature. Five students were arrested during this peaceful demonstration which now totals 22 arrests in two days over the discriminating laws in our state.

Juan Miranda of the North Carolina (NC) Student Power Union stated ” They won’t let us dream….. we won’t let them sleep. We are only beginning to build our power and we will only get stronger! The resistance to the racist backwards legislature is just beginning!”   NC Student Power Union is hoping to build a grassroots student movement uniting with workers and community organizations to stop the attacks on education and public services. Here is an excerpt from the North Carolina Student Power Website:

5 students have just been arrested in Raleigh, NC as part of a May Day action demanding an end to budget cuts, racist voter laws, and attacks on workers. The five are: Zaina Alsous (UNC-CH),Dhruv Pathak (UNCG), Jessica Injejikian (UNCC), Carissa Morrison (UNC-CH), and Tristan Munchel (UNCG). Click their names to hear their stories!

Please see below a statement the 5 released explaining why they took this action today and make an urgently needed donation to get them out of jail!

As North Carolina students, we have watched our beloved state taken over by dangerous and backwards political leadership. Instead of serving the people of North Carolina by providing healthcare, education, and jobs, Speaker of the House Thom Tillis, Governor Pat McCrory, Senate Pro Tem Phil Berger, and Deputy Budget Director Art Pope have proposed a racist, backwards vision for NC.

From cutting 170,000 North Carolinians from jobless benefits to blocking Medicaid expansion that would have provided 500,000 low-income North Carolinians health care, from attacks on worker and union rights, to racist voter suppression, right-wingers in the legislature have made it clear: our needs have no place in their agenda. Read Full Article