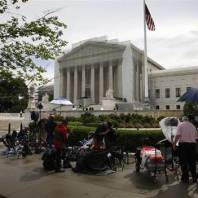 Community organizing is even more critical after the United States Supreme Court’s decision to strike down a key provision from the Voting Rights Act of 1965 earlier today. Voting rights suffered an unnecessary setback with the Supreme Court’s decision in Shelby v. Holder (June 25, 2013).  Section 5 is a part of the Voting Rights Act of 1965 which requires certain jurisdictions, identified in Section 4 of the Act, to get preclearance before implementing any changes affecting voting.  In an opinion not consistent with decades of Supreme Court precedent, this Court struck down Section 4 deemed the coverage formula which determined which states and counties had to obtain preclearance before changing its voting laws.  Without the coverage formula, states with histories of discriminatory voting practices do not have to consult with the Department of Justice before changing its voting laws.  The Court has effectively removed any barriers preventing re-implementation of legislation that prejudices the voting rights of vulnerable populations.

How Can I Help

One of the most important elements of Section 5 is the notification requirements and comment processes the Voting Rights Act established and the centralized flow of information through the U.S. Department of Justice (DOJ).  Since the implementation of the Voting Rights Act of 1965, jurisdictions had to seek input from affected minority voters, and submit information about the proposed change to DOJ.  They are no longer required to do so. Now, organizations on the ground will need to develop a procedure for collecting and disseminating this vital information.

The best way to fight back against changes that will be detrimental to voters of color is to elect officials who will be respectful of voting rights which means voter registration and Get Out The Vote work is even more critical.  Let potential voters know their voting rights are at stake. Let’s get them registered and make sure they cast their vote on Election Day!

For Information on North Carolina Voter ID Laws, view below:

Allison Riggs is a staff attorney focusing on voting rights and environmental justice. She has been with Southern Coalition for Social Justice since 2009. Her voting rights work over the last two years has been focused on redistricting, and she has litigated redistricting cases on behalf of State NAACP Conferences in Texas, Florida and North Carolina. View all posts by Allison Riggs