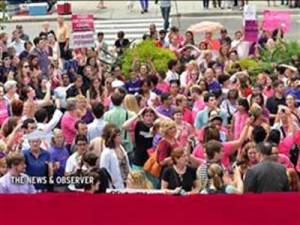 Republicans attempted a secret coup against abortion rights when they added a last-minute amendment, House Bill 695, onto a bill banning Sharia Law. The new abortion law would close 35 of the 36 abortion clinics currently in North Carolina. However, NARAL Pro-Choice NC overnight helped rally supporters to show up to the North Carolina General Assembly when the bill was scheduled for debate despite Republicans not listing the debate on their schedule.

Lately, the North Carolina Legislature has been no stranger in gaining attention from the national media. Whether it’s giving tax breaks to the rich while cutting unemployment from the most vulnerable, North Carolina Republicans has declared war on everyone who falls outside of the richest individuals in the state. Drug testing welfare recipients, denying marriage equality, denying Medicaid expansion, and voter restrictions laws are just a few of the policy measures the super-majority Republican legislature has championed as their highest legislative priorities.

Republicans should be getting tired of all the Moral Mondays and Witness Wednesdays protesters ascending onto the North Carolina General Assembly, but they do not appear to be affected. Unless, their latest  move was an attempt to avoid more protesters. I regret to inform them that it didn’t work since MSNBC Rachel Maddow live streamed the event on the Maddow Blog. Then, she did a follow-up review on her regular broadcast praising the efforts of organizations like NARAL Pro-choice NC who helped get the word out across the Tarheel State.

The Tragedy of Hydraulic Fracking