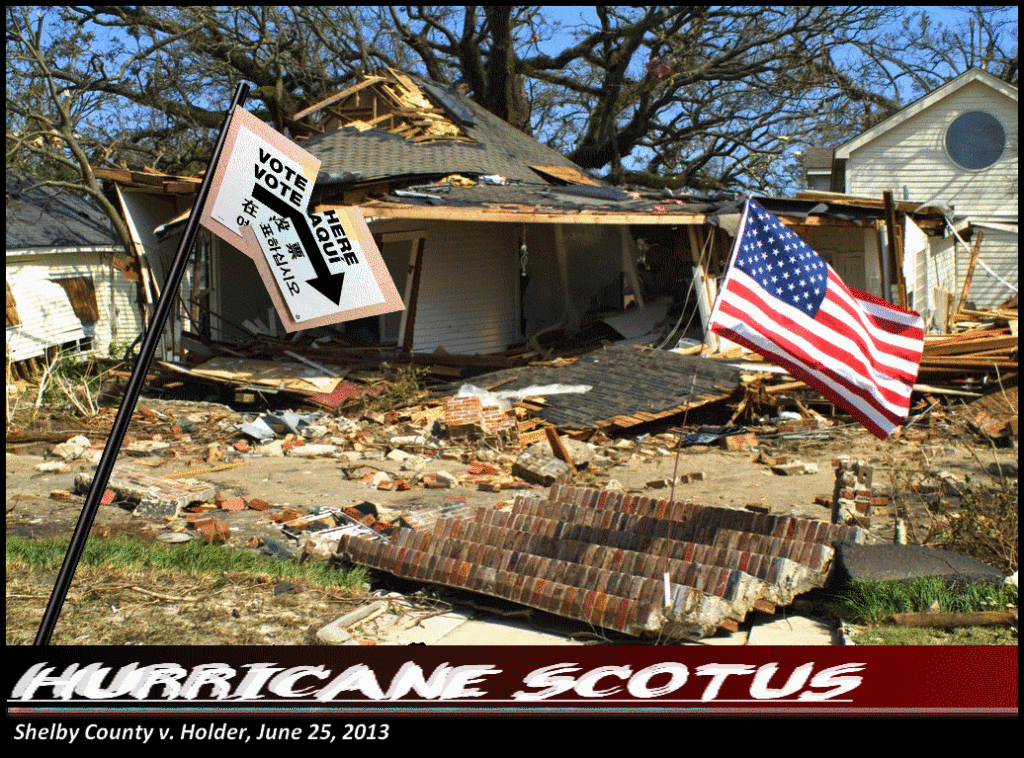 The Supreme Court struck a blow to efforts preventing racial discrimination in voting as a result of Shelby v Holder coming before the high court. In a 5-4 decision, the Court invalidated Section 4 of the Voting Rights Act (the “coverage formula”), which determines which parts of the country are covered by Section 5 of the Act. Section 5 requires those “covered” jurisdictions (the jurisdictions with a history of voting discrimination, and which continue to demonstrate discriminatory behavior) to get approval from the U.S. Department of Justice or a federal court before making any change in law that would affect voting. The Court said the formula used to decide which parts of the country are “covered” is unconstitutional, so for now there are no covered jurisdictions. The Court has created a result in which Section 5 cannot be applied anywhere.

Chief Justice Roberts authored the majority opinion which ignored all of the evidence compiled by Congress in its 2006 decision reauthorizing the Voting Rights Act. Instead, the Chief Justice wrongly focused on the reasons that justified the coverage formula in 1965—reasons that were not the justifications used in 2006. The majority opinion repeatedly discussed the injury to equal state sovereignty created by having only certain jurisdictions be subject to Section 5. Chief Justice Roberts wrote that Congress did not adequately connect the coverage formula to current political realities. This position makes no sense when viewed with the evidence of recent voting discrimination in covered jurisdictions. The Court also departed from its standard deference to Congress—the elected officials that are best equipped to determine what kinds of voting rights protections are still necessary.

Justice Ginsberg drafted a powerful dissenting opinion, pointing out the flaws in the majority’s reasoning. The dissent also lifted up some of the stories of devastating discrimination in voting, including the significantly higher rate of successful cases under Section 2 of the Voting Rights Act in covered jurisdictions. She pointed out the error of halting Section 5 protections because they have been so effective. Indeed, she noted that “throwing out preclearance when it has worked and is continuing to work to stop discriminatory changes is like throwing away your umbrella in a rainstorm because you are not getting wet.”

Still, hope remains. The majority opinion noted that “voting discrimination still exists; no one doubts that.” Section 5 still stands, but Congress must act quickly to enact a new coverage formula, as the Court suggests. Protecting the right to vote is a bipartisan goal, and voting rights advocates will be pushing Congress to do the right thing—to restore the Voting Rights Act and respect the right of every American to participate in the political process.

Allison Riggs is a staff attorney focusing on voting rights and environmental justice. She has been with Southern Coalition for Social Justice since 2009. Her voting rights work over the last two years has been focused on redistricting, and she has litigated redistricting cases on behalf of State NAACP Conferences in Texas, Florida and North Carolina.