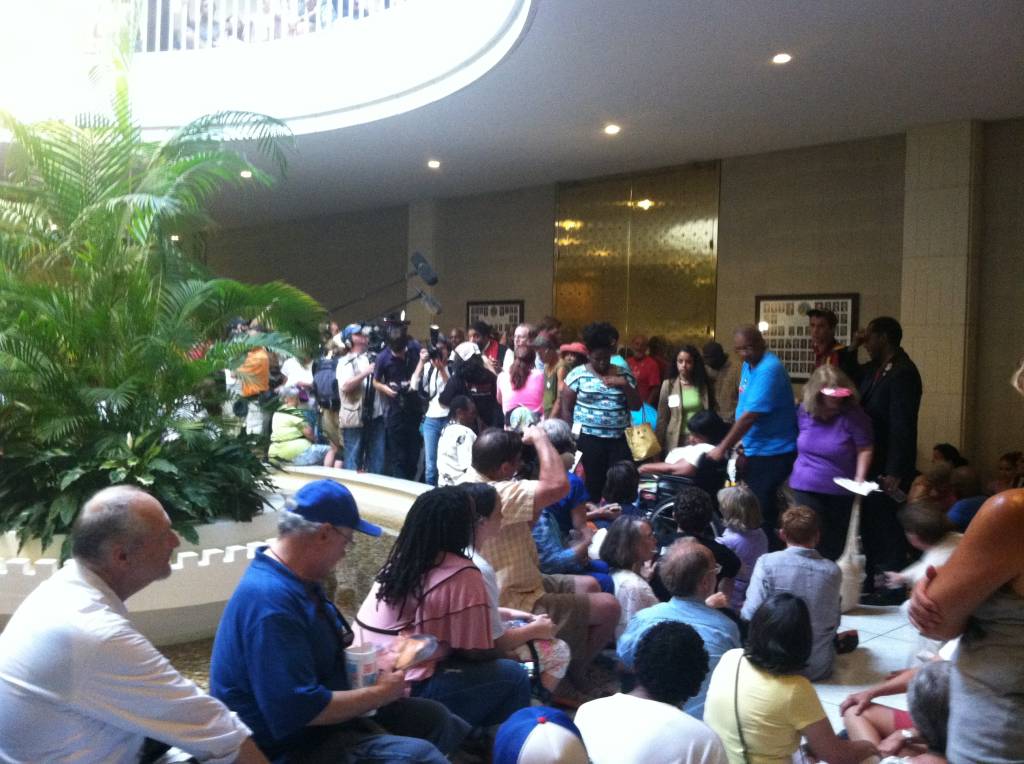 During the 2012 election, I remember riding in my middle class neighborhood seeing all the Mitt Romney for President and Pat McCrory for Governor signs. It was believed that Republicans would make a sweep in the North Carolina State election, and they did. It was clear to me then that many Republicans continue to vote against their own interest. However, the con game that Republicans have played on their middle class and poor constituents has served as the catalyst and growth for Moral Monday Protests.

In last year’s Presidential election, North Carolina was the only battleground state that did not implement voter id laws, but it was not from the lack of trying. Mitt Romney won North Carolina in a slim 51 to 49 percent split over President Obama. Many North Carolinians believe these numbers were reflective of a southern state making progressive movement towards equality and fairness. However, the North Carolina Republicans who came into power has proved this is not the case.

The 51 percent of North Carolinians, who helped vote them into power under the guise of jobs and smaller government, are now regretting their decision. The super majority Republican led legislature is no longer instituting policies that only affect welfare recipients and the impoverished. They have done an outstanding job at offending everyone who fall outside the top two percent tax bracket.

Republican blogger in the Raleigh News and Observer writes:

There was a time when I would have groaned with disgust at the coverage of the tumultuous Moral Monday protests. As a conservative activist and blogger (and registered Republican), my feet remain firmly planted on the right, but I have become surprisingly sympathetic to the passionate protesters who gather every week in Raleigh.

What changed? Last October I lost my job of 19 years and officially became a deadbeat. Now, Gov. Pat McCrory has never used that word officially to my knowledge, but he did remark, while campaigning in 2012, that filing for unemployment is “too easy.” Read Full Article by David Bozeman

Mr. Bozeman’s sense of compassion for Moral Monday Protest seemed to develop after GOP policies began to affect him and his ability to collect unemployment. North Carolina is the first and only state to disqualify itself from receiving federal unemployment benefit funds. This moved cause over 71,000 people to instantly lose benefits effective June 30, 2013 while those who remained eligible for benefits experienced drastic cuts to their weekly payout. Amazingly, North Carolina government decided to make these changes while having the fifth highest unemployment rate in the country.

In their first six months of power, Republicans have rolled North Carolina’s progress back decades with repealed and  new right wing laws relating to voting, education, fracking, taxes, abortion, and civil rights to name a few. On July 22, 2013, the Southern Coalition for Social Justice and regular contributor to Social Work Helper was one of the speakers at yesterday’s rally.

“The Southern Coalition for Social Justice believes that recent state redistricting laws – as well as the General Assembly’s recent proposals to restrict the right to vote — violate both the State and U.S. Constitution. We will fight these laws all the way to the U.S. Supreme Court if necessary. But at the end of the day it is individuals like you, standing together for your rights, that create change.” –Anita Earls, Executive Director, Southern Coalition for Social Justice to Moral Monday protesters

From my observation at the rally, Moral Mondays are waking people up from the backroom deals traditionally made by our elected officials which have in the past remained unnoticed. I saw people from all different backgrounds both young and old coming together to fight injustice. Churches were protesting along side organizations such as Durham People’s Alliance, NARAL Pro-Choice NC, and Equality NC. It appears that everyone is beginning to understand that it is going to take a collective effort to prevent our State from being ruined and ruled by the few.

Republican cuts to education is creating awareness on the political process to a new generation of voters. What appears to be insanity from the right is actually assisting baby boomers from the Civil Rights Era in teaching activism to today’s generation. Also while at the protest, I had the opportunity to talk with a group of students from Durham, North Carolina, and this is what they had to say:

This was our first Moral Monday that we attended and we honestly didn’t know what to expect. From this inspirational experience, we realized that we all have different beliefs, but at the end of the day,we stand up for what’s right. We learned that everyone has their own opinion (such as protesting against racial justice, equal rights, education, voting and many others) and that they have the right to express what they feel. We saw that they will do whatever it takes to stand up or sit down for what they believe in. We really enjoyed this protest and we all found it very inspirational. We know that when we feel that something isn’t right, we know that we need to stand up and say what we believe. NO MATTER WHAT others who don’t agree say!  We ARE Student U!  ~Tosha Ruffin

When people ask me if the Republicans are winning, I simply say regression is necessary. We have benefited from an era of prosperity as a result of those who died to get the rights we take for granted. There is more concentrated wealth and resources within minority communities than when our ancestors fought for equal rights. We are by no means powerless in achieving desired outcomes. However, we must have collective collaboration in order to achieve collective impact.

At this present time, North Carolina is trying to privatize education, make it easier to buy a gun than vote, destroy our environment with deregulation and fracking, and the list goes on.  However, Moral Monday Protesters have demonstrated they are in this for the long haul and not just to the end of this legislative session. The current total of Moral Monday arrests are now over 900 with over 70 protesters arrested yesterday.

I had the opportunity to see Reverend Barber address the people, and my hope is that more leaders in our churches especial in minorities communities begin to stand with him. As Rev. Barber says: We Fight! We Fight! We Fight!