Alexandria , VA, September 26, 2013 – The University of Texas at San Antonio senior lecturer Robert Ambrosino, director Joe Raymond Vega, and students from an Advanced Policy class are the recipients of the CSWE 2013 Virtual Ovation Award for their film Behind Closed Doors: Voices From the Inside, featured at the CSWE 2013 Virtual Film Festival. 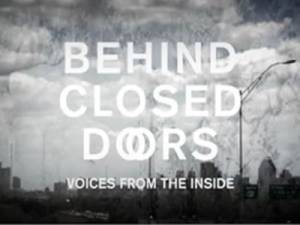 The film seeks to document the impact of domestic minor sex-trafficking in the United States, including interviews with youths and adults who have been trafficked and experts on the issue. The trailer from Behind Closed Doors may be viewed on the Web page of the CSWE 2013 Virtual Film Festival, and Ambrosino’s account of the making of the film is posted on CSWE’s Moving Pictures blog.

Behind Closed Doors: Voices From the Inside was one of nine films selected for CSWE’s first virtual film festival to feature student-produced films related to social work. The festival is part of CSWE’s ongoing efforts to highlight classroom resources for social work educators. Audience members rated the films. The recipients will receive a check for $500.

“This award serves as testimony to the hard work and commitment to social justice demonstrated by our students,” said Ambrosino. “Creation of the documentary was a life-changing event for all involved.”

“We’re pleased to present this award to the team from UT–San Antonio,” said Darla Spence Coffey, CSWE president and CEO. “This project not only underscores the serious and long-term effects of domestic minor sex-trafficking but also showcases an innovative method using documentary film to develop and implement a successful social welfare policy campaign.”

CSWE is a nonprofit national association representing more than 2,500 individual members as well as graduate and undergraduate programs of professional social work education. Founded in 1952, this partnership of educational and professional institutions, social welfare agencies, and private citizens is recognized by the Council on Higher Education Accreditation as the sole accrediting agency for social work education in the United States.

LinkedIn for Kids: Yay or Nay?