Being Black at the University of Michigan

byBrittany Sandefur
in Education, News
0
ADVERTISEMENT
Share on FacebookShare on TwitterShare on LinkedinShare on PinterestShare via EmailShare on Reddit 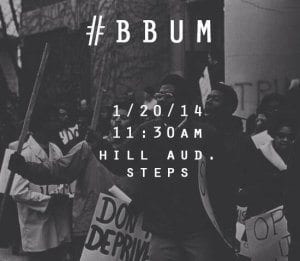 As stated in their demand letter,

“From the White House to Teach for America to the Peace Corps, on ever point of every corner of the globe, the legacy of Michigan is the audacity to be ambitious about its pursuit of social justice.  View in Full

The University’s own Provost recently cited current Black students’ efforts as a part of this legacy in a letter released to the University community last week.

“This commitment is longstanding and fundamental to who we are as an institution. And yet, there are times we have not lived up to our highest aspirations. Last term, we saw this in public displays of racial and religious insensitivity and in the daily aggression our students so eloquently described in the #BBUM (Being Black at UM) Twitter dialogue.” Read More

So what of this legacy? Why does a University that proclaims from all aspects to be committed to diversity struggle to create an environment where Black students can come in from the margins? And if they can’t do it – after court case after court case, after task force after task force – who can? And what does that mean for the growing racial gap in access to education in our country?

Last week at North Carolina State University, President Obama renewed the country’s commitment to providing a robust and accessible education for our young people. We can only hope that his message will trickle down to the institutions of higher learning struggling to increase their numbers and improve their climate or those institutions flat out refusing to do so.

In the meantime, we must be grateful to students who continue to push the envelope and pave the way for their younger brothers and sisters. At first glance, the ‘Black Wolverines’ demands seem extreme, but upon further reflection you realize that it is only this audacity that moves us forward. Many of us professionals once dared to dream that big as students.

Our hope now is that Black students at UM have the courage to expand the dialogue to include other students of color and marginalized communities. As a direct result of legacy of activism by Black students at Michigan, they have a voice that other communities of color do not have and perhaps, therefore, and obligation to lift others’ voices alongside their own.

As we know from experience in and outside of college activism, you can push faster and farther with more people beside you, and all our students deserve the chance to be leaders and the best.

The Importance Of Breastfeeding: Physical, Mental and Financial Benefits

Brittany Sandefur received her BA and MSW at the University of Michigan and currently works at a domestic violence and sexual assault advocacy agency in North Carolina. Particularly interested in non-profit resource development, Sandefur works to support underserved and especially indigenous communities in their efforts toward crisis intervention, health and wellness, community empowerment, and social justice.

The Importance Of Breastfeeding: Physical, Mental and Financial Benefits

Dangers Of Alcohol Use In College