International Women’s Day 2014 saw the Domestic Violence Scheme, better known as Clare’s Law, applied nationally throughout the United Kingdom. The scheme is a result of the ‘Right To Know’ Campaign led by Michael Brown whose daughter, Clare Wood, was strangled and set on fire by her ex-boyfriend in 2009. 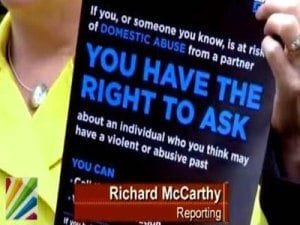 After Clare’s death, it transpired that she had been unaware that her ex-boyfriend had an extensive violent history, including kidnapping a previous partner at knifepoint. The new law now gives people the right to contact the police to find out whether or not their partner has a history of violence. The aim is to give people the chance to make informed decisions about a relationship and ultimately prevent any further deaths as a result of domestic violence.

There are concerns from various charities throughout the UK who work with victims of domestic abuse that Clare’s Law will not protect victims. The concern is that there is not enough follow-up support for someone who discovers their partner has a violent past. However, there is another glaringly obvious issue that needs to be addressed as a priority with regards to this Law.

The language surrounding Clare’s Law has done little to acknowledge men as victims of domestic abuse. Home Secretary Theresa May’s deliberate decision to launch the scheme on International Women’s Day further perpetuates the myth that when it comes to relational violence, women are victims and men are perpetrators. There is a lack of understanding at the highest levels of Government, as demonstrated by May’s comment, that the government are implementing measures to keep “women and girls safe”. Comments such as this are likely to discourage men from using this Law and they will consequently not receive the protection it affords.

In the UK there are currently numerous television and poster campaigns which aim to highlight to young people what abuse looks like, but common to all of them is the critical flaw that the man is never victim. I have worked with many teenage boys who have been in violent relationships and all too often they allow their girlfriend to hit them during an argument because “she’s only a girl” and they could “never hit a girl”. This has corrosive consequences for both genders. Firstly, it belittles the female, as if they are in some way inferior, both physically and in terms of being able to manage their behaviour. Assault is assault; if you make a choice to hit or punch another person, it does not matter whether the punches are light, that relationship is unhealthy and all women and men deserve better.

Secondly, the likelihood that the boy will begin hitting his girlfriend increases if she is allowed to continuously beat him every time they have an argument. Every person has their breaking point and therefore a crucial aspect of domestic abuse prevention is telling women that they also cannot hit their partners. Similarly, we cannot expect men to accept violence without implicitly fuelling the cycle of male violence. If we do not allow space for men to be victims then the only role left for them is that of aggressor.

Of course the majority of domestic abuse victims are female, but we have to ask ourselves if we really know the extent to which men are abused. Clare’s Law is a necessary step in tackling a problem that sees approximately two women a week murdered in Britian alone. However, around thirty men each year are also killed in the same context. If men are made to realize that there is no shame in being victims and support is made equally available to them, we may just find that the problem of domestic violence against males is much higher than we first thought.

Will this new law be considered as a model for replication in other countries with high mortality rates due to domestic violence?

The ADA, Service Animals, and Places of Business