byTenesha Curtis
in Opinion, Social Work
0
ADVERTISEMENT
Share on FacebookShare on TwitterShare on LinkedinShare on PinterestShare via EmailShare on Reddit

I find it fascinating that we, as social workers, proclaim we want to help people make better choices and choose healthier behaviors on their own, but then we speak to them as though they don’t have any power. In the past, I have noticed some of my colleagues experience trouble connecting with those we serve due to their language. The language portrayed two completely false ideas as if it was the honest truth such as our clients had no options/say-so in their own lives or we are psychic and know exactly what was going to happen to them at any given moment in the future.

We tell them that they have to do something or need to be somewhere. As Morgan Freeman/Joe Clark proclaimed in the movie Lean on Me, “I don’t have to do nothin’ but stay [insert your race here] and die!” Some of us may still talk to our clients in the exact same way. Whatever we choose to call this pattern of speech  ‘aggressive’, ‘controlling’, even ‘male’, I’ve found that I am much more successful and a more effective practitioner (and a healthier wife, sibling, child, friend, and co-worker) when I lean towards making a few simple changes in the way I talk to others. 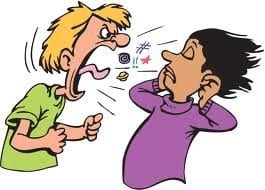 Does anyone have to go to treatment? No.  Do people need counseling? Not at all.

However, these things could be very helpful, may have some benefit, and could help people achieve their goals in life.Can you see the difference between “You have to go to treatment or you’ll never get better” and “You might want to consider entering treatment. I’ve seen it help a lot of people get their lives back on track.”?Let’s listen to ourselves, our clients, and our peers for the following phrases in bold, and see if we can start using (and encouraging others to use) the words and phrases in italics:

She should   –   It might have been more helpful to…, Maybe a better choice would have been…

You can’t   –   You might run into some problems if you…, I haven’t seen people be very successful when they…

I’ve especially noticed a resistance to more aggressive language from people who have issues with authority figures, due to their past experiences with them. However, when we interact with them with an attitude that expresses the fact that they have all the power, and every right, in the world to get up and walk out our door, they seem to feel less of an urge to actually do that. They don’t have an overly controlling figure to “rebel” against. Think about how it takes two to tango, just like it takes two to argue. Let’s try to steer clear of being that opposing force that they use to push themselves away from us and, in many cases, a healthier lifestyle.

Being someone that is there to help, versus someone who is there to control someone else’s life, can be really helpful in building stronger, more effective helping relationships with the people we assist. As a bonus, speaking in a less controlling manner to our spouses, family members, and co-workers can often have a similar effect. The relationship becomes more open, more relaxed, and people feel more comfortable sharing their problems (and successes) with us.

Steer Clear of the Habit of Prophesizing

I’ve found it helpful to avoid telling people what is going to happen to them. Sharing what I have seen or experienced in the past, or even giving them and idea of my fears for them should they make a certain choice is one thing. However, I’ve seen many a practitioner guarantee (they sometimes even literally use that word) that something catastrophic or fantastic is going to happen to someone if they make a certain choice.

“If you stay in treatment for 30 days, you’ll live a happy, healthy rest of your life.”

“If you don’t go to the therapy group for help, your wife’s gonna leave you–plain and simple.”

“If you quit using heroin, you’re going to have so much more money!”

“You don’t stand a chance without Narcotics Anonymous.”

“If you start a business, you’ll just shoot all the profits up your arm.”

While I understand that most of us have been in the field long enough to have seen multiple examples of people struggling with addiction after leaving treatment or having a hard time living independently with a mental illness, there are (many) exceptions to those situations. So, if we decide to essentially promise someone that something will happen, when we really have no way of knowing, the second that terrible thing doesn’t happen to them, or it doesn’t happen to someone who our client knows, we become somebody who has no credibility. It’s hard to trust somebody without credibility, so we have just severely injured our relationship with that person. Try using phrases like “I’ve never seen,” “It’s not impossible, however,” and “Feel free to try, but I’ve never heard of” in order to express humility. We can still give the person the caring warning and advice that we want to offer without delivering it like Ms. Cleo.

Here are some tweaks to the above example sentences to make them more realistic:

“I’ve seen lots of people avoid going to treatment and it often leads to them living a really hard, chaotic life, or even dying. I’d hate to see that happen to you.”

“Trying to live independently can be hard for people who don’t have any mental health concerns. I’m worried about you wanting to live on your own, but let’s look at some ways we might be able to make that more feasible, such as hiring an aide to check in on you or getting you on some medications.”

“Though there are no guarantees, I’ve seen people do a lot better in their recovery when they have some form of formal treatment.”

“I know your wife threatened to leave if you didn’t get help, and I can’t predict what she’s going to do, but her and I both are encouraging you to attend a bipolar support group. Is not going really worth the possibility that she might actually divorce you?”

“Stopping your heroin use can really increase the amount of money you have left to save or spend as you please.”

“I’ve seen kicking a habit be a real struggle for some people, but they often seem to do a lot better when they have the support of the people at Narcotics Anonymous.”

“It’s not impossible, however, I have witnessed several incidences in which people suffering from addiction who do actually gain a profit from running a business slip back into using because they have large sums of money that they’re handling on a daily basis.”