Those who know me best know that one of my greatest passions is my love of books. Therefore, I was greatly distressed to read an article this Sunday in Politics.co.uk from the Chief Executive of the Howard League for Penal Reform, Frances Crook on the latest prison reform legislation. In the article, Crook drew attention to measures that were introduced on 1st November 2013 by Secretary of State for Justice, Chris Grayling, which have banned prisoners in England and Wales from being sent small items, such as books, clothing and birthday cards. 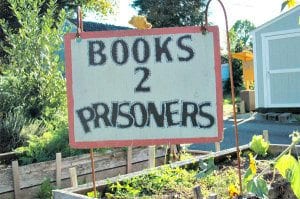 Crook’s article has prompted a petition on Change.org which has already gained over 9,000 signatures and attracted the support of notable authors such as Mark Haddon, Anthony Horowitz and Susan Hill. Philip Pullman, author of the award-winning His Dark Material’s trilogy described the measures as “one of the most disgusting, mean, vindictive acts of a barbaric government.”

Grayling has defended his decision by stating that re-offending rates have remained at over 60% for almost a decade and therefore a new approach needs to be taken to rehabilitation. Whilst prisoners currently still have access to libraries, drastic funding cuts to library services has caused concern for the future provision of literary material in prisons.

Books will be used as an incentive for good behaviour. In a response to Crook’s article, Grayling wrote in Politics.co.uk on Monday: “If any prisoner wishes to buy books with the money he or she gets from their pay, then that is up to them. If a prisoner has engaged with their own rehabilitation in prison, then he will be on a higher level in the Incentives and Earned Privileges scheme, and so would have more money to spend – on books if he so chooses.”

In 2010, the American Civil Liberties Union filed a lawsuit challenging the “unconstitutional” policy at Berkeley County detention centre in Moncks Corner, USA, when the prison officials refused to allow prisoners to receive any materials that contained staples or pictures of any level of nudity, including beachwear or underwear”, effectively banning most books, magazines and newspapers. As there was no library at the Berkeley County detention centre this policy would deprive prisoners of reading material for years on end.

“Jail officials are looking for any excuse they can come up with to obscure the fact that they are unconstitutionally censoring materials sent to detainees,” commented Victoria Middleton, executive director of the ACLU of South Carolina. “And in so doing they are failing to serve the detainees and the taxpayers of South Carolina. Helping prisoners rehabilitate themselves and maintain a connection to the outside world by reading books and magazines is a key part of what should be our larger and fiscally prudent objective of reducing the number of people we lock up by lowering recidivism rates.” The ban was finally lifted in 2012.

Biblioclasm is a tactic that has been used since time immemorial to oppress, control and punish the populace. In 213 BCE Emperor Qin Shi Huang ordered the burning of all philosophy books and history books from states other than Qin; during World War II Richard Euringer identified 18,000 works deemed not to correspond with Nazi ideology, which were then publicly burned. Whilst Grayling has not been so drastic as to commit libricide, the author Ray Bradbury once astutely noted that “you don’t have to burn books to destroy a culture. Just get people to stop reading them.” Grayling must be aware from the lessons of history that denying human beings literature is a callous and powerful stratagem.

In Britain, the average prisoner spends 20 hours a day in their cell and we must remember that many of the people in prison are there for minor and non-violent offences. If books become a scarcity, we will be denying a form of mental escape to people who are trapped inside an unjust system. C.S. Lewis said that “we read to know we are not alone.” But we also read for the simple reason of learning new skills. Self-teaching is a major element in the succesful rehabilitation of ex-criminals. I am currently working with a seventeen year old boy, Liam, who entered the prison system at thirteen, unable to read. For the three years he was inside, he taught himself to read through books on Margaret Thatcher and the miners. Liam proudly claims that being able to read is the single greatest thing that has happened to him. Now he knows that he can one day get qualifications and a job; something he never thought he could do before. Books literally change lives.

At present, I am reading one of those books which is so mind-expandingly brilliant that each page makes you a little giddy. Nothing amazes me more than being able to travel to places that you never even comprehended could exist, all in the comfort of your own head. Reading does not only take you to foreign lands and introduce you to strange and wonderful characters, but it also reveals to you new ways of thinking entirely.

To sit alone in your cell and have the voice of another, articulate to you your exact thoughts and feelings in a way much better than you could ever articulate them yourself,-as if they are speaking to your very soul and speaking to you alone- is the most extra-ordinary of human experiences. A prisoner has already had his family, his home, his job, his liberty and his future taken from him. As Kofi Annan once said, “literacy is a bridge from misery to hope” to take this experience away as well makes me question how Britain can call itself a civilized society.

Lies in Silence Part 1 of 3: Interview with SJ Hart

Lies in Silence Part 1 of 3: Interview with SJ Hart