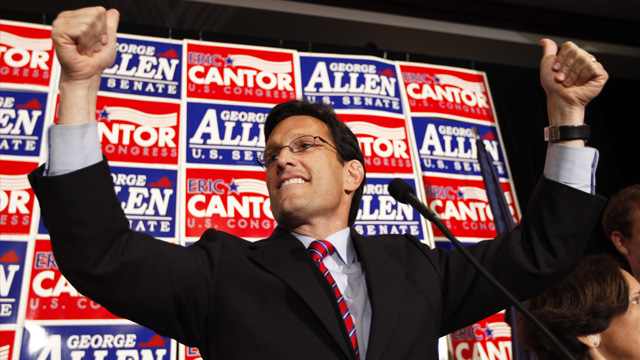 Washington’s political classes woke up to stunning news Wednesday morning. Congressman Eric Cantor, the majority leader of the Republican-controlled House of Representatives had suffered a resounding defeat in the primary at the hands of an unknown challenger—David Brat, an economics professor and political neophyte. This was obviously more a vote against Cantor than one supporting the policies of Brat which still remain to be understood. His initial foray into the media spotlight was unrevealing as he tap-danced around a question from NBC’s Chuck Todd about his views on the minimum wage saying a minimum wage of $100 was too high for workers in sub-Sahara Africa.

As improbable as it was Cantor would lose the primary—no sitting majority leader had ever loss a primary since the post was created in 1899—what would be the betting odds that two professors from the tiny and obscure Randolph-Macon College in Ashland, Virginia would face off in the general election to replace Cantor? Jack Trammell, an associate professor in the sociology department was selected by a Democratic committee to be the sacrificial lamb in an anticipated race against Cantor in November. Trammell’s only chance of scoring an upset against Brat is if Cantor’s ego leads him to enter the race as a write-in candidate. Republicans will never let that happen.

There were losers Tuesday night other than the majority leader. Millions of undocumented immigrants—in limbo for years waiting on Congress to pass some form of immigration legislation—saw a tepid supporter replaced by at a staunch anti-immigrant Tea Party enthusiast. Cantor’s defeat also hurts the Obama Administration and Democrats generally going into the midterm elections. The biggest losers are residents in the 7th Congressional District who go from being represented by the number two guy in the House to a freshman congressman with little or no clout.

This is one of those rare incidents where truly no one saw this coming. Cantor’s internal poll had him up by 34 percentage points. In trying to explain the surprising outcome, his pollster, veteran Republican vote counter John McLaughlin, pointed to the high turnout, small sample of likely voters (400), and the fact that it was an open primary and some Democrats may have voted for Brat to make the race tighter. The race was not close with Brat winning by 11 percentage points 55.5 to 44.5 percent, garnering 36,110 votes to Cantor’s 28,898.

The numbers that got my attention: Brat raised $206,663 and spent $122,793 while Cantor raised $5,447,290 and spent $5,026,626. Brat managed to get an 11 percent victory margin despite being out spent by 25 to 1. The line being bounced around by the punditry was that Cantor had spent almost as much at steakhouses as Brat had on his entire campaign. At one time late in the campaign he had. Brat told his supporters: “Dollars don’t vote, you do.” Ah, one can only wish this could be the ruling paradigm. Yet, the idea that votes can trump money is reason enough to get social workers more involved in politics.

Another lesson is about power. Be careful not to be consumed by power. Learn how to use power to the benefit of those without it. I learned a long time ago that you can get more done if you are willing to give up the credit. The culture among the staff in various House offices run from those who are overly cautious (nothing gets done because everyone is fearful of making a mistake) to those who are obnoxious (your chances of making mistakes are greater because everyone is hoping you will fall on your face). Staffers usually follow the boss’s lead. There were people on both sides of the aisle who were happy to see the arrogant Cantor exit the political stage.

It seems Democrats weren’t the only ones celebrating the cataclysmic fall of Eric Cantor. If you’ve been watching House of Cards, then you’d understand this was Cantor having the ultimate Frank Underwood moment—when the fictional majority leader abandoned crucial negotiations over an education bill he promised the President in order to go back to his district to resolve a dispute over the peach water tower. Rule number one: all politics is local. Back in the 7th CD in Virginia, too many residents believed Cantor had fallen in love with the national stage and was not paying enough attention to his district. He was angling to become speaker of the House but forgot he first had to be a congressman.

Orange Is the New Black: More Women Landing Behind Bars