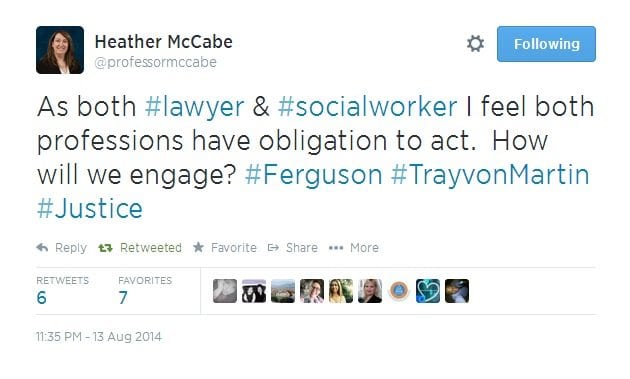 Whenever tragedy strikes, social workers are among the first responders helping people cope with their grief and loss and empowering people to put their lives back in order. Social workers provided support troops at the Boston Marathon bombing, they assisted children and families during the shootings at Sandy Hook Elementary School in Newtown, Connecticut, and they were ever present during the aftermath of Hurricane Katrina. I imagine there are social workers on the ground in Ferguson, Missouri. If not in a healing role, I would bet there are social workers among the protesters. The Missouri chapter of NASW is in Jefferson City located little more than a 2 hour drive away.

Watching the unrest in Ferguson one has to wonder if anything could have been done to prevent the confrontation between the black community and predominantly white police department. Some believe all of this could have been avoided if Michael Brown had just followed the police officer’s orders, but it still would not solve Ferguson’s current problem. Some in Congress see the problem as a too heavily armed police department. Disarming the police does not solve the problems either. The city was a powder keg waiting to explode.

The order that needs to be nurtured in Ferguson is a recalibration of the balance of power between the black community and their almost all white leadership. Obviously there needs to be more black representation in government for the city of 21,000 residents that is nearly two-thirds black. Five of the six city council members are white as is Mayor James Knowles. Only one of the seven members of the school board is black. Only three of its 50 police officers are black; the rest are white. Former Ferguson mayor Brian Fletcher went on MSNBC’s Melissa Harris-Perry Show to explain the government’s racial imbalance. He said the reason there are so few black elected officials is because blacks are reluctant to run which may be true because of the county’s voting system. He also indicated that the pay was low. He said the police department wants more black officers but few qualified candidates have come forward.

There are many challenges in Ferguson which experienced a swift transition in racial population in the last decade. Obviously what is needed in Ferguson and I would imagine hundreds of cities and town like this across the country is some good old fashioned community organizing—something social workers were very adept at going back to Jane Addams. Community organizing in the 21st century must include more than voter registration although that is a critical component to turning things around. Community organizing today must include addressing the policies that erect barriers to full civic participation such as an at-large voting system and overbearing law enforcement policies. It is not enough to protest the counterproductive policies that contributed to the unrest, the community needs to promote policy ideas that will be beneficial to the entire city. Social workers can assist with this using a community-based participatory research (CBPR) approach.

It’s not just about race. As economic inequality continues to rise unabated, social mobility has been stunted and economically-challenged individuals and families of all racial and ethnic backgrounds are falling further behind. There is sense of hopelessness in many neighborhoods. Ultimately, people will turn to destructive behavior whether it is full-fledged riots as we witnessed in the sixties and as seen in Ferguson today, or it may manifest as increased substance abuse, child abuse, domestic violence and suicide which have been on the rise.

NASW hosted a very successful national conference last month that brought together hundreds of social workers from every part of the country around the theme of: Courage, Hope, and Leadership which is exactly what is needed today in Ferguson. Ferguson needs social workers with the courage to provide the leadership and intervention needed to bring genuine hope to a city in distress.

As both #lawyer & #socialworker I feel both professions have obligation to act. How will we engage? #Ferguson #TrayvonMartin #Justice