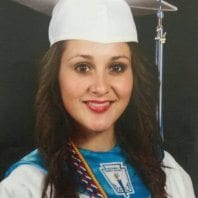 When Miriam Sanchez, 18 years old, migrated to Zapata, Texas at the tender age of 9 from Tamaulipas, Mexico adjusting to a new environment was hard. She no longer had the home she loved and had spent the first years of her life in and she could not communicate with her cousins who spoke English—the language barrier was one of the first obstacles Miriam had to overcome.

But soon after, things started to change. Miriam was determined to fulfill the dream her parents crossed the border to pursue. Miriam started to get good grades in school. She spent her summers reading and began to master English. When she was 13 years old, Miriam decided to start working in the fields of Zapata, Texas to help her parents who were having financial difficulties.

The long hours of labor in the fields she endured working under the blazing heat that led to body aches, fatigue and deterioration of her physical strength did not discourage the student. Instead, this journey fueled her motivation to work even harder towards her and her family’s American dream. “My hardships have made me mature quickly, have taught me patience and given me the determination that no barrier can stop me from reaching my dreams of a college education,” she says.

During high school, Miriam kept her grades up and during her freshman and sophomore years, she was accepted into the Migrant University Summer Experience camp at the University of Texas-Pan American, where she took college credit level courses. Miriam was later inducted into the National Honor Society and graduated among the top 10 students from her high school senior class.

Thanks to her resolve, she is much closer to realizing her dream of a college education.

She recently became the recipient of a TheDream.US scholarship. “This scholarship is going to help me a lot. I will be able to focus on school without worrying about where I would get the money to go to school,” she notes.  “[This scholarship] is an amazing opportunity because I feel like someone is going to be there to help me out,” she adds. Miriam says she is looking towards a brighter future, one she hopes is filled with books, and new experiences as she begins her college career at the University of Texas Pan American.

TheDream.US is a national scholarship for immigrant students –and one of the few for this population– who have Deferred Action for Childhood Arrivals (DACA) or Temporary Protected Status (TPS) statuses. To be eligible for a scholarship, students must have graduated from a U.S.-based high school with a cumulative GPA of 2.5 or higher (or achieved a GED diploma with an equivalent score); and must demonstrate financial need. Scholarships are granted to first-time college students pursuing an associate degree or community college graduate pursuing a bachelor’s degree at a TheDream.US partner college.  TheDream.US has over 30 partnerships with colleges and universities across the nation including George Mason University in Virginia, Miami Dade College in Miami, Hunter College in New York, The University of Houston, and scores more.

Like Miriam, there are over 300 students who are moving closer towards their educational goals thanks to the more than $32 million the TheDream.US has raised to grant scholarships.

“We, as a nation, have an opportunity to leverage the investment we have already made in these young, highly motivated men and women by offering a Scholarship Fund that will support them in joining our next generation of talented health care providers, educators, accountants, scientists, software developers and social workers. They are part of our country’s future,”- Candy Marshall, TheDream.US President.

Miriam’s long-term goal is to open a clinic to provide health services to the immigrant community. She has seen how difficult it is for members of her community, including her family, to receive the medical attention they need because of lack of insurance and financial means. Her own parents have only been to the doctor once since migrating to the United States 10 years ago.

“I want to be in the medical field. I want to open a clinic to help people who do not have health insurance. I will provide affordable prices,” she shares enthusiastically.

Miriam’s desire to help others is also inspired by individuals like her school counselor Ms. Castillo who have selflessly supported her along the way. “She was really helpful. She showed me the value of education but she also showed me to value myself.”

Miriam is determined to continue to work hard to show others that anything is possible. “I want my sister to know there is more than working in the fields,” she says. Miriam has 2 other siblings and she is the first in her family to pursue a college education.

TheDream.US is accepting applications from September 1 until October 26.  For more information visit www.TheDream.US

TheDream.Us was founded by Graham Holdings Company CEO Donald E. Graham, Democratic activist and philanthropist Henry R. Muñoz III, and former U.S. Secretary of Commerce Carlos Gutierrez. TheDream.US is led by Candy Marshall, who was a director at the Bill & Melinda Gates Foundation, where she helped build the foundation’s global programs, and Gaby Pacheco, a DREAMer—and a DREAMer advocate—who was part of the 2010 march, the Trail of Dreams, from Miami to Washington DC, an event that helped launch the DREAMer movement nationwide.

Cheryl Aguilar is a licensed clinical social worker, LICSW, LCSW-C, founder and lead therapist of Hope Center for Wellness, LLC, a multicultural behavioral health and training consulting practice serving DC metro area residents and organizations. She founded and co-leads Social Workers United for Immigration, a DC based network of social workers committed to the well-being and the advancement of immigrants and immigrant rights. She can be contacted at caguilar@thehopecenterforwellness.com. View all posts by Cheryl Aguilar