As Single Room Occupancy Housing (SRO) celebrates its 30 years of service, I had the pleasure of speaking with Mr. Ervin R. Munro, M.S., the Director of Social Services, for the organization. Mr. Munro immediately exuded the warmth, intelligence, and passion that have allowed him to have a long and inspirational career serving others. This has also contributed to SRO Housing’s continued growth and position as the largest provider of affordable housing for homeless and low-income individuals in the Western United States.

SRO Housing provides homes for the homeless in the section of downtown Los Angeles most commonly known as “Skid Row”, and they are the only organization in Los Angeles that offers a complete range of housing from emergency to permanent as well as significant supportive 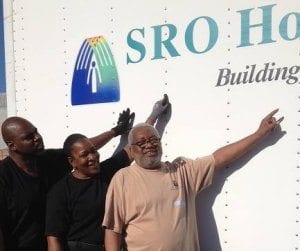 services. As the man in charge of the Social Services Division of SRO Housing, Mr. Munro has a long history of working in the social services field. His professional journey began with a Bachelor’s degree in Education and a Master’s degree in School Psychology from the University of Wisconsin-Whitewater.

He has worked for over 30 years in a variety of social service positions, including as a licensed school psychologist, educator, director of social services, case manager, operations manager, and private consultant and trainer. He has also worked in a variety of settings with diverse populations including homeless, elderly, immigrants, runaway/throwaway youth, substance users/abusers, people with mental illnesses, and persons affected by HIV/AIDS. Some of his accomplishments during this time include Co-founder and first Acting Executive Director of AIDS Project Los Angeles as well as Co-founder and Co-chair of the Case Management Task Force of Los Angeles County.

His responsibilities include overseeing and directing the daily operations and management of all supportive housing social services programs. These programs include case management for homeless and low-income individuals who reside in SRO Housing’s 29 properties throughout the Skid Row area, as well as special services for those individuals with disabilities, HIV/AIDS, veterans, individuals with mental illnesses and/or substance issues, and the elderly. Some of these services include congregate meals and home-delivered meals, transportation, money management, socialization/recreational activities, special events, community activities, and more.

Mr. Munro has been responsible for the development of many programs, trainings, and workshops during his illustrious career, one of which he was kind enough to share with me called “Basic Communication Skills and Problem-Solving Techniques”. It was developed for and is required to be completed by all employees of SRO Housing before beginning work. The basic premise of which is to learn to communicate and problem solve effectively with others so they’ll best be able to serve the individuals they’ll work with. SRO encourages all of its employees to remain open-minded and discover what their clients need rather than make assumptions. This training has been so effective within the organization that Mr. Munro is often asked by outside organizations to train their employees in it.

This program is just one example of the ways in which Mr. Munro and the rest of SRO Housing strive to be a model for client-centered services. They truly understand what their community needs and are responsive to those needs. As a part of this integration into the community, SRO Housing does its best to hire individuals who may have been in SRO Housing’s programs and/or are directly from the community. A college degree is required for most positions within the Social Services Division.

Employees are highly supportive of their clients’ goals and work hard with them to turn dreams into reality. It is this effort to immerse themselves into the community and look for holistic solutions to issues to homelessness which makes this program an exemplar model. On a personal level, there are not enough words to express the admiration I have for and the inspiration gained from having interacted with Mr. Munro and SRO Housing.

Ms. Anita U. Nelson, MBA, SRO Housing’s CEO, had this to say about Mr. Munro, “Erv has a wealth of knowledge and experience that has significantly contributed to SRO Housing’s development and to Skid Row as a whole. He touches everyone’s area; he’s a true team player and clients are always at the forefront. He’s committed and it’s a part of him. He loves his job so much I feel funny calling it a job. He’ll be difficult to replace.”

As we wish a happy 30th Anniversary to SRO Housing and many more years of service, we’d also like to wish the same to Mr. Munro, along with much joy and success in his next venture, which happens to be retirement.

The Struggle For American Indian Voting Rights in South Dakota

Amanda Stemen is the Education Staff Writer for Social Work Helper who will also make her fair share of contributions on mental health. She received her MSW from UCLA and also has her MS in Recreation Administration. She is passionate about the promotion of mental health through the creation of a life worth living which is also evident in her personal blog www.haikuthehelloutoflife. She can be contacted at ajstemen@gmail.com.