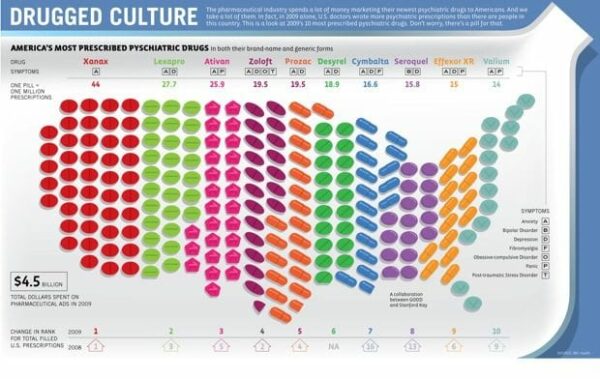 To help minimize such tragic occurrences in the future, it is necessary to be educated about these controlled substances. Hopefully, being able to spot the warning signs in an individual and helping to reduce the stigma of seeking treatment for addiction may help save lives and reduce prescription drug abuse.

In terms of age groups in a broader sense, young adults aged 18 to 25 are the most likely to abuse prescription drugs. Naturally, older adults are often prescribed drugs because of the higher incidence of illness. However, prescription drug abuse at this age becomes even more risky as drugs are metabolized differently due to age. Also, if the older adult is taking supplements or medications, these further increases the risks presented to health.

Effects of use and signs of an overdose

Prescription drugs often have an intoxicating effect when they are abused in excessive amounts. The user may experience symptoms such as lowered anxiety, lessened inhibitions, drowsiness, lack of concentration, diminished coordination, memory loss, slurred speech and more. In addition, using such drugs recreationally may also lead to long term health problems. These may include slower breathing, respiratory distress, symptoms of withdrawal, symptoms of tolerance, decreased blood pressure and more. In addition, barbiturates may bring about irritability, fever and fatal withdrawal.

In a prescription drug overdose, the sufferer may experience a coma, which may eventually lead to death. Brain damage may result, as well as serious nausea and pain. Permanent physical damage may occur as well. Other effects may occur, depending on which prescription drug has been taken and what kind of amount. If you believe you are in the presence of someone who may be overdosing, it is critical that you call Poison Control immediately.

Means of prevention and helping the addicted

Of course, there are always methods of prevention for those wishing to avoid addiction, perhaps because they are an addict recovering from past abuse. In this case, you will want to ask your doctor specific questions about your medication, so that you are better educated about how it works. Also be sure that your doctor is aware of any other medications that you are taking concurrently, so that he or she may be sure that they will not conflict in any way. Only take your medications as directed and be sure to keep them secured in a safe place. Also, be sure to correctly dispose of any unused medications as well.

Many doctors will often prescribe non-habit forming medications in response to patients who have developed dependence. Oftentimes, this may be combined with cognitive behavioral therapy for maximum effectiveness in recovery. A detox process that is derived of natural vitamins and supplements is also another option to help rid the body of prescription drugs and restore mental clarity.

If you know someone who is battling a prescription drug addiction, there are a number of ways to assist in getting them help. You will want to speak with a medical professional, such as a doctor, nurse or school counselor. If the person is going through withdrawal, you must be sure that they receive medical attention. Withdrawing from such drugs without being monitored may also lead to a fatal overdose. Prevention methods for relapse are also discussed, as well as how to best recover if a relapse does indeed occur.

One problem associated with substance abuse is that of the stigma that society places upon those facing such difficulties. For instance, an offer of employment may often be withdrawn if the employer realizes that the potential employee has had a previous history of prescription drug abuse, even if they are now clean. This is also often the case for offers of housing for those in recovery. However, the problem is having stable living conditions and work opportunities are two important aspects that help such people continue to move forward, as well as maintain sobriety.

The recovering prescription substance abuser may also fear entering a pharmacy to pick up medications to assist their recovery. This is because they believe they will be stigmatized as merely picking up more medications that they will be using recreationally as before. This stigma also extends to medical professionals, who may be resistant to prescribe medication to such individuals when they are in actual need of them, because of past problems they have had with prescription abuse.

The most powerful and obvious way to reduce the social stigma attached to substance abuse is for those who need help to get it, therefore showing others recovery is possible. Treatment providers can aid in prescription drug abuse, offering detox, therapy sessions, cognitive retraining and continuing care such as transportation to Narcotics Anonymous.

Those who have battled prescription drug abuse should be able to share their stories and how they overcame their addiction. This will in turn encourage others to step forward and do the same, helping to remove the stigma, prevent future drug abuse and hopefully prevent fatal prescription drug overdoses. Former prescription drug abusers and those who support them may also choose to turn to policymakers and advocacy groups to help them get the word out and do away with the myths of this epidemic.