Many would describe normal as confirming to a standard, the usual, typical, or what’s expected, but those with mental illness have a different approach to normality. My recent conversation with the resilient Eleanore taught me that normality isn’t always has society defines it. As a unique child who kept her head in books, Eleanore learned to develop her own approach to normality from an early age. Through her battles with sexual assault and mental illness, Eleanore proved that one does not need to confirm to societal norms to become truly inspirational.

SWH: What are you diagnosed with and how did it progress over the years? 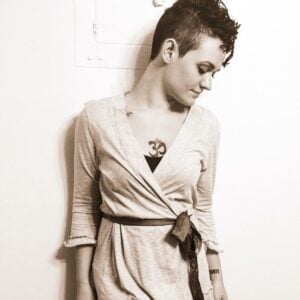 Eleanore: I was initially diagnosed and medicated for depression. When I was put on celexa, I became increasingly manic. When I hit my teen years, things started getting a little more intense. I started taking on more and more activities so that I would have to spend less time at home, and I excelled at those activities for a while – but there was always one point in mid-November (every year) that I would crash and burn. I’d skip school for about a week, skip all my activities, and devote a significant chunk of my time to overwhelming panic.

My doctor discovered that bipolar runs in my family and after treating me successfully for that, it became my diagnosis. I was diagnosed with anorexia binge/purge subtype separate from any of the bipolar or depression. I was pretty recently diagnosed with Post Traumatic Stress Disorder (PTSD) and panic disorder, but a lot of my mental illness stems from my PTSD in the first place.

Celexa turned what was a tough situation into an absolute nightmare. I had a lot of sex (I still have a lot of sex, but this was borderline dangerous promiscuity with inadequate protection), I shaved my head, my self-harm was more frequent, I developed a lot of disordered eating habits

SWH:What is it about November that triggers your panic attacks?

Eleanor:November is an interesting month for me. I live in the Midwest, so it’s when my seasonal depression always gets really bad. My bipolar tends to be manic/depressive according to the seasons, so when it’s summer I tend to overestimate my abilities and take on too much, and the inevitable crash happens in November. It’s also when a lot of the worst abuse happened in my relationship, and that tends to bring back some unpleasant memories.

SWH:How did your sexual activity play a role into your recovery and current relationship?Eleanore:I’ve always really enjoyed sex. After I was sexually assaulted I needed to reacquaint myself with the idea that sex felt good and it was okay, and it ended up becoming a distraction from the things that were going on in my life. I had about 10 sexual partners over a span of 3 months, and it wasn’t the healthiest decision. Part of sex, for me, is that it is one of the easiest times for me to take joy in my body, and for me to be comfortable in my skin. Feeling appreciated and feeling sexy has been instrumental to my recovery, because even on days that I’m feeling bloated or particularly dysmorphic, my partner still finds me desirable.

SWH: What does feeling normal mean to you?

Eleanore:To me, feeling normal means being able to cope with the things that happen on a day to day basis without panicking or bursting into tears. Obviously, I still have a good cry after a stressful work day, but normal to me is being physically healthy, happy, and in a place mentally that isn’t mania or depression.I don’t think that my normal aligns closely with society’s normal. Traditional normal doesn’t involve panic attacks or crying in the back room, but my normal occasionally does, and that’s okay!

SWH:What is the most rewarding part of your recovery so far?

I think that the most rewarding part of my recovery so far has been that I can look at myself and say “I am a valuable human being, and my faults are okay”. It’s been a long road but looking at where I am now and comparing it to where I was when I started; I have reached goals I didn’t even think were possible. I run a business, I’m in a healthy relationship, and most importantly, I wake up happy most days.

SWH: Where are you today in your recovery?

I’ve reached a truce with my eating disorder. My body image is good most days. My PTSD sneaks up on me – there are things that remind me of him, like a pair of boots or cologne a customer is wearing, but I’ve gotten better at handling that too. The biggest thing I’ve taken away from the last three years is that honesty, while painful, is what works. Honesty with my support network, honesty with my doctors, and honesty with myself.

What advice could you give someone suffering from mental illness?

You are not your illness. Your illness is a part of you and that’s okay. It isn’t something to be ashamed of, and it isn’t something to ignore. Asking for help is okay. Being sad is okay. Something that may seem ordinary for anyone else may be super difficult for you and that’s okay, and that makes it even more incredible when you do it. Everyone has a different road to travel but no matter where you start from, it gets better.