What Happens When You Actually Read the Grand Jury Testimony

byVanessa Bedell
in Criminal Justice, Diversity, News
0
ADVERTISEMENT
Share on FacebookShare on TwitterShare on LinkedinShare on PinterestShare via EmailShare on Reddit 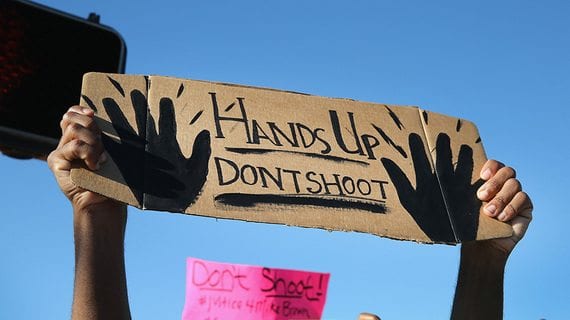 As a Social Worker who works in East Harlem with students who hail from all different ethnic backgrounds the current climate surrounding this case has been palpable. Walking through the streets of NYC, specifically Harlem, in the days following the release of the Grand Jury’s decision regarding Michael Brown is an experience that is almost beyond words. The upset, outrage, and fury are an undeniable presence in these streets.

As always is the case in 2014, my Facebook feed has been a constant stream of varying opinions regarding this case. My fellow Social Work friends post up a relentless stream of civil rights memes and human rights sentiments. My conservative acquaintances persist with as many random videos they can find of ‘Blacks’ committing heinous crimes, some from several years ago, anything they can find to hack down any identification people may be forming with this tragedy.

Caught as a bystander in the constant racial hail storm, I decided to default to what I used to do as a Sociology major in Hunter College. I did a case review. When I was a student in one of my Law classes, we were not allowed to speak about cases until we had read a majority of the actual case. So, I happened upon St. Louis Public Radio’s site that breaks down the ,Grand Jury Testimony on Michael Brown into bite size pieces and by bite size I mean around 100 pages.

Darren Wilson was not indicted by the grand jury, and it must be noted that a non-indictment by the grand jury is not a finding of innocence or guilt. Therefore, double jeopardy does not attach, and prosecutors have the ability to seek another indictment to charge a suspect if they deem appropriate. However, in this case, it is highly unlikely this will happen.

According to Think Progress,

Assistant District Attorney Kathi Alizadeh instructed grand jurors on how to decide the case based on a statute that was invalidated by the U.S. Supreme Court two decades ago. As O’Donnell points out, that statute had not been valid for the entirety of Alizadeh’s legal career. That statute said that officers can use any force they deem necessary to achieve the arrest of a fleeing suspect. It does not preclude deadly force ,saying only that officers are “justified in the use of such physical force as he or she reasonably believes is immediately necessary to effect the arrest or to prevent the escape from custody.  Read Full Article

This is hard to grapple with as a Social Worker who is outraged by another young black youth losing his life at the hands of law enforcement. As a Social Worker we advocate for those that are oppressed, those that are disadvantaged and those who lack basic human rights. The way the law is written offers a vast amount of gray area that spans what feels like a galaxy of space between what is allowed and what really ‘should’ be done. But therein lies the crux of this case. What should have been done?

Rumor # 1: Darren Wilson was patrolling after learning of the convenience store burglary and engaged Michael brown under the assumption that he was involved and guilty of said crime.

So… this all happened essentially because these two boys were jay-walking in a quiet area of Ferguson?

Rumor #2: Michael Brown was shot a few times when Officer Wilson was in fear for his life.

Reality in Testimony: Officer Wilson testifies that Michael reached into his patrol car and was pummeling him with the strength of ‘Hulk Hogan and testified that he feared for his own life. Wilson also testified Brown reached for his weapon and it ‘went off’ in the patrol car, startling Brown and causing him to flee. Wilson stated he then exited his vehicle to give chase. However, Brown, by Wilson’s report, turned around and started charging back towards Wilson in an effort to challenge and shoot him.

According to the Medical Examiner, Brown had nine wounds including one in the top his head suggesting Brown was in some type of submissive position.

Brown’s body was approximately 100 feet from Wilson’s patrol car, which is the equivalent to the length of a football field. Wilson added in his testimony that at the same time he started to ‘charge’ at him he reached for his waistband.

According to the Medical Examiner, the only items found in Brown’s pockets were few dollars and a small amount of marijuana. No stolen goods and no weapons.

Why would a young black male reach into a cop car, beat a cop, reach for his gun causing a discharge, give up and run away from the car, but then turn around and go back towards that same officer  shooting a hail of bullets?

If Brown was armed from the beginning why wouldn’t he have pulled his weapon on Officer Wilson when he was in point blank range allegedly beating him in the patrol car?

None of the facts add up at all, not even close. Eye witness accounts said the body was uncovered for many hours in the blistering heat. Wilson’s supervising Officer reports that he covered up the body as soon as he reported on the scene. So which is it?

Kathi Alizadeh and Sheila Whirley were two prosecutors appointed by St. Louis County. One of the very first things Ms. Alizadeh says in the opening statements was : “Some housekeeping notes to start. I’m going to pass out to you all, you all are going to receive a copy of a statute. It is section 563.046, and it is, it says law enforcement officers use of force in making an arrest. And it is the law on what is permissible, what force is permissible and when in making an arrest by a police officer.”

At the onset, there is no question as to ‘what’ actually happened or what was going to happen, she sets up the entire jury to believe that the only issue that we should be looking at here is how much force is allowed by the law period. There is no thought of “Was he supposed to be making an arrest?” “Did Michael Brown actually break a law?” Just to name a couple of thoughts.

When you take the time to read all of the testimony, there are so many holes in the story that it would be like trying to plug up a sieve. All of the case has been organized perfectly into a little box that says ‘Self-Defense’ on it all of the players behind the scenes drinking the same Kool-Aid.

Conservatives and racists alike want to believe that this irate black kid attacked this officer and he’s just another one who “doesn’t respect authority”. People who live and walk in these streets every day know better.

People want to shout, “What about black-on-black crime??! They are shooting each other every day!”

To them, I say, one has absolutely nothing to do with the other. The truth is that the temperature of law enforcement interactions with minorities has turned hostile and has spiraled out of control. Only someone incapable of sight would say that it has nothing to do with race.

Take the tragedy of Eric Garner’s passing. The videos of his arrest and actual death are everywhere on the world wide web. Conservatives like to shout, “He was resisting arrest! They had to take him down, he should have just complied.”

Again, I’ll play devil’s advocate sure, you can push me to say, okay, he did resist arrest which is illegal, so they took him down. However, as he’s on the ground you can clearly see the moment when he passes. Does anyone lean down and take a pulse? Police Officers are all trained as first responders. No. Does anyone even look concerned that he might be dead? Not at all.

This is where the value of the actual lives of minorities is absolutely non-existent. Here-in lies the problem. How do you quantify that? How do you write a law that says you have to care about killing innocent people of a different race? You can’t. It doesn’t exist. It is up to the individual to care about the next person, to value their place on this Earth. The penal code will always be written to excuse the law enforcement and vilify the alleged ‘criminal’.

After all this reading I am sad down to my bones. I dedicate my life to lifting people up who are constantly trampled on doing a job that pays less than being a secretary for a mid-level executive in corporate America. I don’t know how to tackle this, I don’t know where to begin. I can’t help people love each other. I can’t help people stop hating each other. I can’t prevent people from believing, in their core, that some people’s lives don’t matter as much as others.

I am left, empty.

Dealing With Addiction During the Holidays

I am a Social Worker in NYC who loves crafts and all things to do with 'creating'. I love to make things from scratch and get my hands dirty. I wandered into Social Work from a background working in a Children's Hospital and in Early Education. I specialize in Pediatric based Social Work with experience in adult Substance Abuse Counseling and intensive work with incarcerated men and women in the NYC Correction system. There's no place I'd rather be. #letshaveaconversation