I spoke with a client recently who told me that she found her life has really changed by having the habit of doing morning stretches, meditation and then taking a short walk before breakfast. She said, “If I give in to my natural stream of thoughts I’d be watching tv on the couch just to not feel pain. This new practice is different than numbing my pain.” 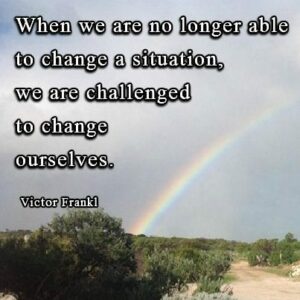 Having some ways to fight off low energy or self-destructive habits are important. It can feel at times that it is so much easier to just go down the slide. But, when that happens, we often are angry with ourselves and regret that we not only wasted time, but didn’t cultivate a good practice. Sometimes we also break our momentum of doing regular workouts or taking a daily walk and wonder why.

A common example of this is when we skip going to the gym or yoga class to watch tv or sleep longer. I have been guilty of this on Saturday mornings, despite the fact that the class starts at 10:30! There are also other examples involving human interactions that can eat at us.

For instance, a 22 year old client of mine had changed his previous pattern of spending time with friends from high school who drank too much. He started to skip bars and go to Starbucks with a new co-worker whom he admired for his tenacity and ability to overcome a drug history. There was a good insight when he slipped went out drinking with his high school buddies. The next day he was angry with himself and realized he liked his new self much better than his past self.

Rob said he felt that unless he could get away from his past he’d lead a life like many of his buddies who have low-paying jobs, inability to commit to relationships and just party on weekends because they refuse to “grow up”.

As we explored this more, Rob saw his own struggles between maturity and the Peter Pan myth. He knew his brother who is 31 still has a lifestyle similar to his high school friends and felt that it was the family fate. As we talked, Rob realized that he is different than his brother and that he had some new habits that pulled him out of his past cycle. It’s important for someone to realize that if they do slip, they can just start over again with the new routines they’ve cultivated. The fact that Rob felt so much better with his new friendship, his new mentor (who is his boss) plus his plans to take college courses now, helped him to see he traveled further than he thought.

Self-recrimination and beating oneself up, does not do any good and it’s best to just renew the resolution and start with the new habits you’ve cultivated without self-blame. If you feel that you are just sick and tired of a routine, then of course it is never too late to make a change.
—–
Here are some Quotes on Habits to think about:

The second half of a man’s life is made up of nothing but the habits he has acquired during the first half.
Feodor Dostoevsky

Habits are at first cobwebs, then cables.
Spanish Proverb

All man’s natures are alike; it is their habits that separate them.
Confucius

Weight loss is a sum of all of your habits – not individual ones.
Helen M. Ryan

There is no more miserable human being than one in whom nothing is habitual but indecision.
William James

We speak of many things parrot-like, but never do them; speaking and not doing has become a habit with us.
Swami Vivekananda.

Never say any man is hopeless, because he only represents a character, a bundle of habits, which can be checked by new and better ones. Character is repeated habits, and repeated habits alone can reform character.
Swami Vivekananda

A nail is driven out by another nail; habit is overcome by habit.”
Desiderius Erasmus
—–

1) Is Vivekananda right that we prefer to speak and not do? Why is walking the walk so much harder? Don’t we want to be the ideal that we speak about? Does talking about something help us or plant the seed for the future? Or does it keep us only in our concepts and postpone action?

2) Why do habits become cables after a while? Is it physical as well as psychological? Can you see in yourself when something changes from being a cobweb that you can dissolve with your hand to a strong habit?

3) Is Helen Ryan implying that it takes a lifestyle to change a habit such as overeating? Do people fail at changing a habit due to narrowing their remedy instead of taking a more holistic approach?
—–
What habits are you trying to break or cultivate? What are the obstacles?

When you looked at the habits you’ve changed over your life, what do you think helped the most? When you slip or regress what are the temptations? It can help to try to look at the underlying feeling. For instance, instead of saying, “I was just hungry”, it can help the inquiry to think of what was going on in your life that proceeded the urge to eat. Was there an interaction with someone that created a certain reaction?

Tools that can help us break habits include meditation, breathing and movement which can be found in my 3 CEU online course here. I have found a combination of self-inquiry and concrete tools work well to fight inertia and the slide into old habits.

What Happens When You Actually Read the Grand Jury Testimony

Dee Cohen is a Licensed Clinical Social Worker in Florida and Certified Yoga Teacher. You can read more articles at her blog  Tools For Stress Relief as well as visit her inspirational daily quotes for inspiration page at Inspirational Quotes on Facebook.