byMelissa theSeed
in Disability, Politics
0
ADVERTISEMENT
Share on FacebookShare on TwitterShare on LinkedinShare on PinterestShare via EmailShare on Reddit

The Achieving a Better Life Experience Act (ABLE) was signed into law by the President on December 19, 2014. Tax-free savings accounts can now be built for a population that has historically been forced to live in poverty. Up until now, in order to be eligible for SSI and Medicaid, a person could not have more than $2,000 in cash and property ($3,000 for couples) or make more than $700 monthly (!) in order to be eligible for Medicaid or SSI.

This means they can’t save money for things that Medicaid and SSI don’t cover like education, housing, a job 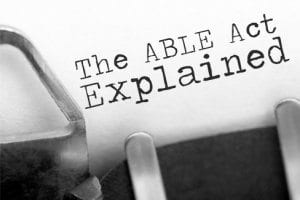 coach or transportation. While the rest of society is encouraged to save for emergencies, unforeseen expenses and rainy days, people with disabilities – who have naturally higher expenses and higher medical needs – were forced to scrape pennies and do without due to archaic laws and discriminatory notions held by society in general.

What is the ABLE Act?

This bi-partisan piece of legislation will give people with disabilities and their families freedoms and security never before experienced. It amends the IRS code of 1986 to allow savings accounts to be set up for individuals with disabilities much like the college tuition accounts known as “529 accounts” that have been around since 1996.

The Treasury Department is currently writing all of the regulations. There will then be a period of time where public comments on the proposed rules will be allowed. Before the end of 2015, every State will be responsible for establishing and operating an ABLE program.

How does it work?

In a nutshell, an ABLE savings account can be opened up by an individual with a disability or by someone else on their behalf. Up to $14,000 may be deposited yearly untaxed, with that amount to be increased as inflation rises. If an account surpasses $100,000, the owner of the account will no longer be eligible for SSI but would not be in danger of losing Medicaid. When a person dies, Medicaid will be reimbursed first from the account before it is dispersed to the person’s estate.

What can the funds be used for?

Any disability-related expenses, including:

This is a great step forward in the right direction for this community. Let’s hope the regulations are completed sooner rather than later so that individuals and families can begin saving for a better life!