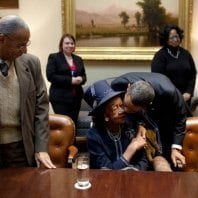 With Black History Month coming to a close, it is important to recognize the contributions of those who strove for societal progress in social services before us. As an MSW program dedicated to celebrating social justice and cultural diversity, SocialWork@Simmons is proud to honor five major pioneers in social work history.

These extremely prolific civil rights advocates shattered barriers and established themselves as true leaders within major US government social service institutions. Their contributions helped establish the necessary momentum for societal progress and have positively affected the lives of millions of people around the globe.

Mary Church Terrell is a true pioneer for African American women. As the daughter of former slaves-turned-small-business-owners, she was one of the first Black women to earn a bachelor’s degree, the first black woman appointed to a school board, and the first African American admitted to the Washington DC Branch of the American Association of University Women.

George Edmond Haynes was a lifelong civil rights advocate and had a diverse educational background in social work. In fact, Haynes was the first African American to graduate from the New York School of Philanthropy (now the Columbia University School of Social Work).

Haynes went on to become co-founder and first executive director of the National Urban League. He went on to work as a special assistant to the secretary of labor (under the title of director of Negro economics), making him one of the two highest-ranking Black federal employees.

Thyra J. Edwards was a lifelong social worker with a multinational impact. Her career began as a social worker in Chicago and she went onto diversify her skills as a lecturer, women’s rights advocate, labor organizer, and journalist. After WWII, she became the executive director of the Congress of American Women. One of the major contributions of this organization was the establishment of the first childcare program in Rome to assist Jewish Holocaust survivors.

She advocated for people of all races, nationalities, and ethnicities, and worked internationally until her death in 1953.

Lester Blackwell Granger launched his career as a high school teacher and a social worker. In 1952, he became the first Black man to serve as president of the National Conference of Social Work.

Lester Blackwell Granger spent most of his time as acting NCSW president advocating for civil rights measures. After WWII, he served as a special consultant to the Navy in support of efforts to desegregate the military, which earned him the Navy’s Distinguished Civilian Service Award and the Presidential Medal for Merit.

In 1958, he was one of four civil rights activist leaders, including Martin Luther King Jr., to meet with President Eisenhower to discuss civil rights reform. Like George Edmund Haynes, Granger served as president of the National Urban League for a large part of his career.

Dorothy Height was a women’s rights and civil rights advocate and is often referred to as “The godmother of the civil rights movement.” Height began her lifetime of advocacy by campaigning against lynching and as a social worker.

She went on to establish the YWCA’s Center for Racial Justice, founding the National Women’s Political Caucus, leading the National Council of Negro Women for 40 years, and co-organizing the famous 1963 March on Washington. Throughout her life, she campaigned internationally for women’s rights, traveling to Mexico, India, and many countries in Africa.

Height is the recipient of both the Presidential Medal of Freedom and the Congressional Gold Medal, among many other awards and honorary degrees.

These are just some of the many influential African-American social workers who spent their lives advocating for social justice and civil rights. Ultimately, many of their initiatives succeeded, but there is still much to improve upon, and social workers are capable of making the changes our society needs. In honor of Black History Month, reach out to let us know what influential social workers or Black leaders have had an impact on your vocation to be a social worker.

Chris Ingrao is the community manager for SocialWork@Simmons, the online MSW offered through the Simmons School of Social Work. This innovative online program empowers aspiring social workers to effect major change in their communities. In his free time, Chris enjoys exploring New York City and seeing a lot of live theater. View all posts by Chris Ingrao