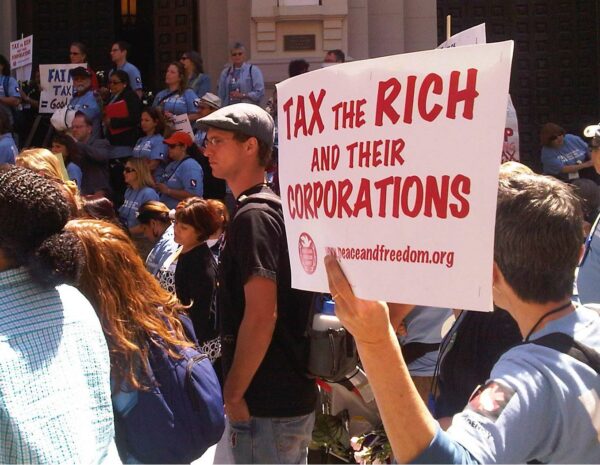 In an issue brief from the Washington Center for Equitable Growth, policy analyst Nick Bunker weighed in on the ongoing debate about marginal tax rates and economic growth. He points to research by economists Thomas Piketty of the Paris School of Economics, Emmanuel Saez at the University of California-Berkeley, and Stefanie Stantchava at Harvard University whose paper, “Optimal Taxation of Top Labor Incomes: A Tale of Three Elasticities,” concludes the optimal top tax rate on labor is 83 percent. There has been an ongoing debate about the effect of marginal tax rates on economic growth. Piketty and company argue that tax rates for upper income earners could be much higher without impacting economic growth and could result in higher wages for average workers.

Thomas L. Hungerford, the public finance specialist at CRS who authored the report noted that GDP increased by an average of 4.2 percent during the 1950s, and real per capita growth increased annually at a rate of 2.4 percent compared to a GDP growth rate in the 2000s of 1.7 percent and annual real per capital growth of less than one percent following the Bush tax cuts.

Hungerford concluded there was no definitive evidence of an association between marginal tax rates and economic growth which angered congressional Republicans who suppressed the report contending it had methodological flaws. Hungerford’s findings were at odds with supply-side theories that tax cuts would result in increased economic growth.

Despite any real evidence that tax cuts for “job creators” are the remedies for our anemic economy, congressional Republicans continue to promote tax reforms that lower marginal rates for top income earners. In the meantime, the economy continues to sputter because most consumers do not have the disposable income needed to buy the goods and services that would put more people back to work or in fulltime positions with higher wages.

The fact that the country experienced solid economic growth when top marginal rates were much higher than they are today suggests that current Republican tax reform proposals are based more on ideology than fact. Yet we see few if any Democratic tax reform proposals that would significantly increase top marginal rates while providing tax relief for the middle class. Piketty and company say it is not only plausible but may help restore the economy.

Without going into great detail—you can read the original publication here—the researchers expanded their analysis beyond the conventional idea that high income earners respond to higher marginal rates by trading some of their working time for more leisure time. They looked at additional ways high earners behave in response to higher marginal rates.

Top wage earners may look to shift their wage income to capital income such as stock options in order to avoid higher income taxes, or reduce their rent-seeking behaviors because lower tax rates provide an incentive for pursuing greater compensation.

The idea that income redistributive policies are a death knell for the economy has been preached so much that there is nearly universal acceptance of this as the gospel truth by the right and the left yet there is scant evidence to confirm this belief. Here Bunker showcases evidence that clearly disputes the contention.