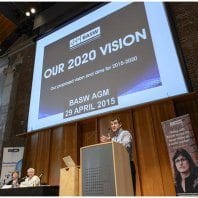 Today, the British Association of Social Workers (BASW) is holding a members conference in order to set the vision and aims for the Association for the next 5 years. Highlights and thoughts from the conference are being shared on twitter using the hashtag #BASWAGM15.

Guy Shennan, Chair of the British Association of Social Workers, said social workers were better placed than any profession to report the consequences of policies that were likely to continue being implemented after the General Election.

Social workers must collectively speak out as a profession against the damage being done by austerity to society’s most vulnerable citizens, says Shennan to association members.

“After five years of cuts to public services, what we can be certain of is that cuts will continue, as every major party remains committed to austerity,” said Mr Shennan.

“So we need to ensure that the social work voice is added to all those other voices demanding an alternative to austerity policies.

“Through a clinical psychology friend I have recently come across a group called Psychologists Against Austerity, who are drawing attention to the damage that neoliberalism is doing to the nation’s mental health.

“I believe we need to have Social Workers Against Austerity too, as, more importantly, our service users need this. Because, I would suggest, social workers more than any other profession know about the damage that neoliberalism is doing.

“We see it day-in and day-out – damage to the nation’s mental health, to the welfare of our children, to family relationships, to the wellbeing of disabled people and older people.”

Mr Shennan said joining organisations like BASW and other social work groups was a “political act” that helped strengthen the profession’s voice.

“It is a political act to organise locally in branch activity. To meet at work as a group, to stop working and have lunch together, even if only once a week, to talk about your experiences at work that day, that week.

“To write a joint letter to a local paper, as a group of BASW members. And there will be many other routes to acting and working collectively.”

Doing “real” relationship-based practice was also a way of “reclaiming” social work’s ability to make positive change by “getting alongside service users”.

Mr Shennan said: “It is our profession, our practices, doing what we have been trained to do, and following the great, real social work traditions, that should constitute social work.”

Louise Owen-McGee. Head of Communications at The British Association of Social Workers (BASW). BASW is the largest professional association for social work in the UK, with offices in England, Northern Ireland, Scotland and Wales. For more information visit https://www.basw.co.uk View all posts by Louise Owen McGee