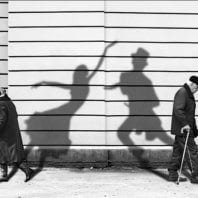 “I know I’m going to get older. I can handle that, and I even know that I am going to die. What bothers me the most, though, is the thought of becoming irrelevant.” This statement was made by a 69 year old man who is a member of my consciousness raising group.

Old people are becoming less and less a minority in our country. Quite to the contrary; today, approximately 18 per cent of people living in the United States are 60 years old and older. By 2050, people over 60 will make up over 25 per cent of the population…hardly a small minority.  When we marginalize a group of people, we are pushing them to the edge of humanity and according them lesser importance.  Their needs and desires are then ignored.  When ageism is in action, this is exactly what happens. Ageist language and media portrayals of old people encourage this marginalization.

Ageism can be very subtle, or as one of my colleagues describes it, “slow-drip” oppression.  It creeps up on us, sometimes without our ever knowing we are being oppressed until we find ourselves in the outer margins of society.

Nobody wants to be pushed to the edge of society.  Yet, older adults teeter on this edge…always dancing on the line between inclusion and exclusion.  In today’s society pride in age is hard to find.  It’s no wonder that older people often hide their true age.  Stop for a moment, and ask yourself, “why?”

Many of us tend to think of this practice as vanity, but consider that the true answer may be fear…fear of becoming irrelevant.  So, what do we do?  We drink the “Kool-Aid” dispersed by the media and the anti-aging industry; the message is, If you don’t look young enough, you too will be marginalized.  Not only is the advertising deceptive, it is detrimental to our overall health.

Not wanting to be relegated to the outer margins, we support the anti-ageing industrial complex, spending hard-earned money on anti-aging products, medical and non-medical procedures, and cosmetic or plastic surgery.  When we do this, are we just satisfying our own vanity or are we hoping to buy a few more years of relevancy?

The dance of marginality seems to start younger and younger these days, with people in their forties and some even in their thirties seeking out a magic bullet that will make them seem to appear younger than their true age.  For those of us who are older, however, one day you are a vital contributing member of society and only a few wrinkles later, you are dancing on the margins again, trying to figure out how to get back to the other side before you are turned into a trivial appendage, maybe even a burden, to the current social order.

Ageism in itself can cause a more rapid decline of our physical and mental health as we edge  closer to the end of our lives.  Researchers have proven that older people who are constantly subjected to negative stereotypes of their age cohort often internalize these messages.  As a result of this internalized ageism, their own self esteem is affected; and this leads to both physical and mental health issues.  In addition, recent research has shown that those who accept their age and feel the wonderful combination of beauty and wisdom in their own selves are mentally and physically healthier than those who feel the pressure of having to conceal their true age.  Many of us just keep on dancing.

Who is doing all this dancing?  First and foremost are the “invisibles.”  The “invisibles” are healthy people between the ages of 60 and 80 who are not ready to “retire” in the way that traditional retirement has been socially constructed.  This cohort is the most skillful at the dance of marginality; they get in a lot of rehearsal time.  They know that if they don’t enter the dance contest, they will automatically lose. And, they can lose a lot.  Mostly, they can lose their financial security and, with that, their dignity.

You may have noticed that the age of the traditional concept of old has been pushed back quite a bit, with people living 10, 15, and some even 20 years longer than previous generations. In many ways the invisibles are in the prime of their lives.  Yet, they are constantly maneuvering to remain inclusive members of society. Most catastrophic is the cold shoulder they bear from American workforce.  If they are not still in their career jobs, they find themselves traveling a road that leads them closer and closer to the margins of society.

A lovely 85 year old woman came to visit me in my office one day.  She was carrying a rather large umbrella.  “Is it raining?,” I asked.  “No,” she replied; I just refuse to be seen using a cane.”  Even at 85, she is still dancing.  To appear completely autonomous is her goal.  Afraid to admit that she may need some help, she struggles to keep up the appearance for fear that she will not be perceived as the smart woman she is.

The way our society is constructed, it takes more courage to ask for help than it does to manage on our own regardless of the consequences. It is the American way, to “pull yourself up by your bootstraps” and rely only on yourself to get where you’re going.  Another octogenarian told me “if I show the slightest sign of  not being able to live independently, my children will whisk me into the nearest assisted living facility.”  She knows this, and so she dare not let her age show.  She, too, keeps on dancing.

Fear seems to be the main reason why so many of us are caught up in this dance of marginality. There are other times and other places where older adults have been embraced by society.  For so many, this is no longer true.  Old people are often segregated, put aside, or discarded completely. They are often treated as if they are diseased. We need to start changing the way we view and interact with the older adults around us. Old age is not contagious.

The ageing process, including the end of life, is part of the course of the lifespan.  Ageing is not a disease to be treated; it is a gift to be accepted.  It is an accomplishment to be proud of.  Older adults should not feel as though they have to “sing for their dinner,” nor should any of us have to “dance for our dignity”.

As a political social worker, Alice is deeply interested in best practices in community building and an advocate for improving services and quality of life for older adults. She developed and runs Senator Liz Krueger’s Roundtable for Boomers & Seniors.She is particularly interested in the challenges of longevity in today’s ageing society, and Alice holds an M.S.W. from Hunter College School of Social Work. View all posts by Alice Fisher