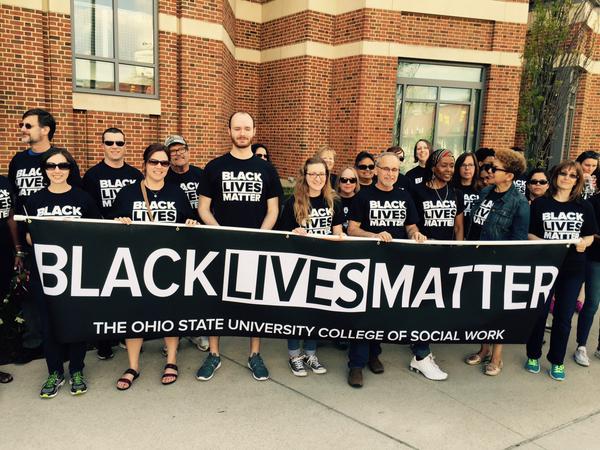 Over the past year, we have witnessed massive protests around the world spawned by human rights violations, declining labor rights, and austerity cuts to public services. The plight for many Americans struggling with poverty and located in low-income neighborhoods are not being spared the same fate in our “land of plenty”.

These protests have brought to light the use of police forces and government resources being used to further suppress the voices of the poor and what appears to be an acceptable disdain for policing communities of color. Many have predicted this period in our history will be remembered as the third reconstruction, but how will social work be remembered regarding the most important issues in our life time?

Since Ferguson and the development of the #BlackLivesMatter Movement, it is my opinion that social work leadership is failing to engage and participate in discussions on behalf of vulnerable populations with very little political power. Largely, I have been disappointed in the social work profession as whole for the lack of any organized national efforts to advocate on a range of social issues affecting the clients we serve.

However, I was able to get a glimpse of what a top down effort could look like when social work leadership leads an effort instead individuals being forced to act autonomously without social work leadership support. Recently, I had the opportunity to interview Ohio State University College of Social Work Dean Tom Gregoire who lead a #BlackLivesMatter March for their community. Here is what Dean Gregoire had to say about why it was important for him to get involved.

SWH: Why was it important for you and the School of Social Work to lead a march on the #BlackLivesMatter Movement?

We have all be moved by the events of the past year and wanted a tangible demonstration of support for our students, faculty, and staff colleagues. It is important to hold conversation about emergent social topics.  But as social workers, it is also important at times to transcend talk. By marching we “walked our talk” and provided a demonstration of our concern and support that transcended conversation.

SWH: How are student’s processing in the classroom the racial tension and angst manifesting in a variety ways across the country?

I believe that a lot of our community is in pain regarding the level of racial tension and violence. We feel the need to communicate our concern and support. Although we hosted a public forum on these issues, we did not think we were doing an effective enough job of providing the vehicles for classroom attention to the issues that are manifesting nationwide.  I believe that left our entire community wanting more, and looking to us for a strong statement. So we took a walk together.

SWH: How did the use of social media help to increase awareness of your school’s on the ground efforts with the #BlackLivesMatter March?

Social Media played a critical role.  We made a decision to participate in the walk on Wednesday, and then marched together on Saturday, only three days later.  All of our communication was via social media. Social media was important in allowing those who wanted to support the walk but were unable to attend.  Via social media our impact and reach was much broader, and allowed far great involvement.  To further carry the message we created a Storify to tell the social media story of our day, https://storify.com/osucsw/blacklivesmatter-march

SWH: How do you think social work institutions and members of our profession can engage in the large discussion on poverty and institutional racism within the systems we work?

Social media is an important vehicle for carrying the message. It is not constrained by traditional media, and its much more real time. We are not dependent on the mainstream for getting our message out.  I also think it’s important to be open to conversation that moves us toward solution. It is important to be a witness and a voice in the face of social injustice and a voice.  As social workers we need to transcend complaint alone and lean into difficult issues with an expectation of leading change.  Finally,

SWH: What do you feel are the biggest barriers and challenges for social workers to engage and/or have an impact on the social issues of our day?

Courage and curiosity are two important precursors to having an impact on important social issues. Courage allows us to believe that we can make a difference, and helps us be patient for the enduring effort.  Curiosity is the path to new solutions   Rather than thinking we have all the answers, a willingness to see a problem in a completely different way is the only path to new strategies. We need more sentences starting with “what if?” and fewer with “yes but”.

We are often dragged into zero-sum arguments, ones that pit vulnerable groups against each other.  Should limited resources go to support needy children, or older adults?  Is the oppression of people of color more urgent than attacks on the rights of the LGBTQ community?  When we are arguing among ourselves we are not advancing.  Nothing preserves the status-quo better than when the people who need it changed are fighting among themselves.

We All Win by Helping Kids Escape Poverty and the Ghetto

Police Abuse: A Serious Threat to the Rule of Law