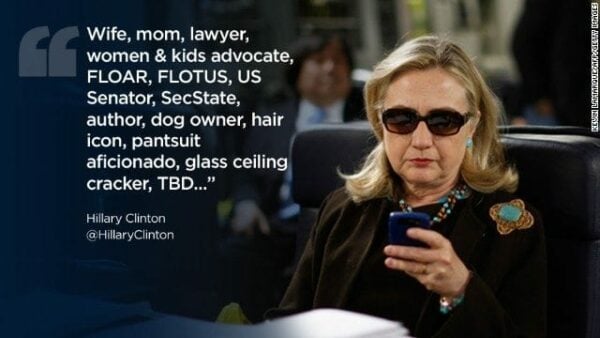 Having spent too many hours trying to understand the reasons for the incessant negative media output, I can find no rational explanation for why those in the media have taken a disliking to the Democratic frontrunner Hillary Rodham Clinton to put it mildly. She is simply hated because she is Hillary. Certainly most media types do not know her well enough to form a reasoned opinion and negative poll respondents have no clue about who she really is. I have never had a conversation with the former Secretary of State.

I probably have read more about her than most and I like her plenty. Then again, I tend to give people the benefit of the doubt. If I don’t know you, I assume you are reasonable until I have reason to believe otherwise. Think about it, if the media could cherry pick mistakes we have made in life, they could readily construct a narrative that would make anyone seem undesirable.

Like any politician, public person, or human being, Hillary Clinton has made her share of mistakes. The worst thing I have read or heard about the probable Democratic nominee is that she and Bill Clinton have made a lot of money and that it is possible that they may have done so by bending the rules or participating in unethical behavior. It’s called business as usual on the Hill. I call these speculations circumstantial hypotheticals with not much there.

New York Times readers are all too familiar with the many hatchet jobs America’s paper of record has inflicted on Bill and Hillary Clinton—beginning with the egregious Whitewater exposé. The investigation was based on a malicious New York Times article that former reporter Jeff Gerth later admitted was filled with errors that he blamed on his editors. Six years later after spending more than $50 million of taxpayers’ dollars, the Office of the Independent Counsel released a report declaring there was insufficient evidence to bring criminal charges against President Clinton and the First Lady.

There were Filegate, Travelgate, and now the overblown Emailgate and about a dozen or so other innuendos and speculations about Hillary Clinton misdeeds. It is understandable that people would believe something must be there, wondering why she is constantly accused of wrongdoing. She gets accused because she is hated and feared by many conservatives.

Now that Hillary Clinton is within striking distance of becoming the first woman President of the United States, her enemies are frantic in their desire to deny her this historic moment. Her detractors in the media are practically begging Joe Biden to enter the race, despite the emotional strain he is under dealing with the still fresh grief of losing his son Beau. I doubt if his candidacy will be a difference maker, but it could be disruptive if President Obama chooses to endorse a candidate. His press spokesman Josh Earnest has all but declared that choice would be the vice president.

I have been a big Hillary Clinton supporter since the days I stood on Broadway in upper Manhattan in the freezing cold handing out campaign materials for her Senate campaign. I knew about her then what I know now—that she has a passion for young people in distress that grew during her time working with Marian Wright Edelman and the Children’s Defense Fund. Hillary’s book, “It Takes A Village,” received rave reviews from top newspapers for her thoughtful advocacy on behalf of children.

Hillary Clinton is unarguably the most qualified candidate to run for President in my lifetime. Elected twice to the United States Senate, served on the Armed Forces Committee, Secretary of State, she has a lifetime of public service. She can only be disqualified on character issues. Dare we suggest that some of her attacks are motivated by sexism? That’s like suggesting some attacks on President Obama are motivated by racism. Haven’t we put both of those isms to rest?

I do not want a saint as President of the United States. I want someone in the Oval Office who is going to kick some butt on behalf of the 90 percent. I want someone who is going to fight tooth and nail to bring hope to the 40 percent who are struggling just to keep their heads above water. I want to see Hillary Clinton as the first woman President because she is a fighter. She can take the heat. If you don’t trust her, then hold her accountable. If she is bad as some make her out to be, make her a one term President. She is the best hope to beat the Republicans if Democrats rally around her, and that is priority number one.