Time to End the War on Drugs 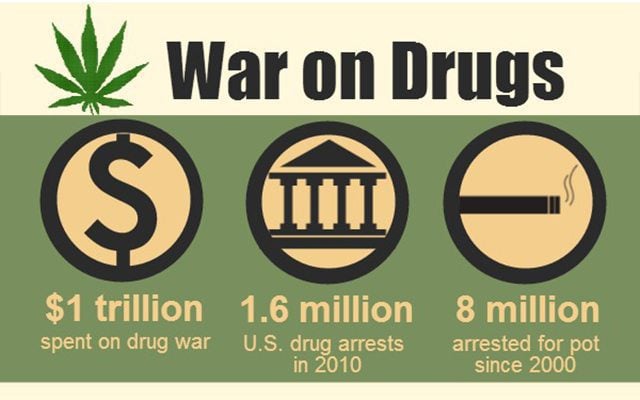 More than 44 years have passed since President Richard Nixon declared his “war on drugs.” That battle cry was proclaimed in June 1971 following the tumultuous 1960s that saw the United States transformed in many ways.  During the decade, Americans witnessed statutory victories by the civil rights movement that outlawed state-sponsored segregation and expanded voting rights for African Americans.  Those triumphs came with a price—riots in major cities and protests that led to the March on Washington.

Conservatives who had spent two decades trying to repeal and roll back New Deal legislation saw the implementation of the Food Stamps program and watched with utter dismay as President Lyndon Baines Johnson signed into law amendments to the Social Security Act that created Medicare and Medicaid, two massive programs of socialized health care. There was unrest on many of the nation’s campuses.  Hippies and flower children flaunted their disdain for moral purity.  President Nixon decided it was time for law and order to rule again.

Declaring drugs “public enemy number one,” Nixon mobilized the federal government and states to legislate against the promiscuous use of drugs.  In 1973, the federal government created the Drug Enforcement Agency to coordinate the activities of federal agencies.  Also in 1973, New York Governor Nelson Rockefeller pushed through the most draconian of all drug sentencing legislation—15 years-to-life in prison for possession of small amounts of marijuana and cocaine. Many states followed suit with mandatory minimum sentencing laws and the nation’s prison population exploded from 330,000 in 1973 to more than 2 million by 2002.  The toll on Americans—particularly African Americans—has been huge. The international aid organization Health Poverty Action released a report earlier this year on global casualties of the war on drugs.

The recent surge in the use of heroin is occurring more among white suburban women and has elicited a more reasoned response from law enforcement and lawmakers. Policymakers see the epidemic as more of a public health problem than one that needs tougher criminal penalties. Sen. Jeanne Shaheen (D-NH) wants $600 million added as a supplemental appropriation to the recent budget agreement.  The bottom line is it is long overdue for addiction to be treated as apublic health issue. Thousands of individuals have had their lives ruined because their addiction was treated as a crime.

A number of bills addressing addiction have been introduced in Congress.  One to watch is H.R. 953—the Comprehensive Addiction and Recovery Act of 2015 introduced in February by Rep. James F. Sensenbrenner, Jr. (R-WI-5).  The bill has bipartisan support with 43 Democrats and 19 Republicans as cosponsors. It has been referred to the Education and the Workforce Subcommittee on Higher Education and Workforce Training.

If enacted it would direct HHS to convene a Pain Management Best Practices Inter-Agency Task Force to develop and disseminate information about best practices for pain management and prescribing pain medication.  It would amend the Higher Education Act of 1965 to prohibit the Department of Education from including any question about the conviction of an applicant for the possession or sale of illegal drugs on the Free Application for Federal Student Aid form.  It would create a bipartisan Task Force on Recovery and Collateral Consequences that would review conviction records of individuals in recovery.

It is incredulous that the war on drugs has continued for so long. The unintended consequences of this ill-advised campaign have irrevocably scarred the lives of too many. Countless children and their futures can be counted among the collateral damage.  It is time to bring the war on drugs to a close.

Wage Stagnation and the Undervalue of Social Workers

Holiday Depression and Our Elderly