On Saturday, January 23rd, Congresswoman Lee will receive a 2016 Trumpet Award during ceremonies at the Cobb Energy Performing Arts Center.  Congresswoman Lee will share the honors with fellow social workers Congresswoman Karen Bass (D-CA-37) and Alexis M. Herman, Secretary of Labor during the Carter Administration who began her professional career with Catholic Charities.

My summer reading included Renegade for Peace and Justice, the autobiography of California Congresswoman Barbara Lee who represents the 13th Congressional District that includes Berkeley, Oakland and Alameda County.  Hers is a remarkable story.  She had to overcome enormous challenges—difficulties that would have broken the spirit of most people. She prevailed because of her faith in God and her unwavering belief in her ability to conquer every obstacle in her path, even the few that were of her own making.  She seized and made the most of her opportunities.

She caught the attention of the late great Congresswoman Shirley Chisholm as a volunteer during her presidential campaign. She lifted herself from welfare to creating a business that allowed her to hire hundreds of workers. Her unique ability to get things done made her an invaluable aide to former Congressman and Oakland mayor Ronald Dellums who became her mentor. 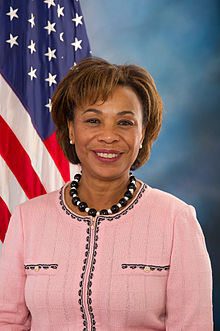 Since being elected to Congress in 1998, Congresswoman Lee has been a leader in the national and global fight against HIV/AIDS, authoring or co-authoring every major piece of legislation dealing with global HIV/AIDS issues.  She took much heat for her lone courageous vote in the House of Representatives against authorization for going to war following the September 11, 2001 attacks.

Lee has made poverty one of her signature issues as co-founder and now co-Chair of the Out-of-Poverty Caucus and chairs the Democratic Whip Task Force on Poverty, Income Inequality, and Opportunity.  In September of 2013, President Barack Obama nominated her to be a U.S. Representative to the 68th Session of the United Nation’s General Assembly.  The President nominated her again in September, 2015 to represent the United States during the UN’s 70th Session.

The Trumpet Awards is the brainchild of civil rights icon Xernona Clayton, a pioneering television executive with the Turner Broadcasting System.  The award was created to honor African American achievers and others who have made significant contributions to the African American experience.  Congresswoman Lee has been the recipient of numerous awards and honors. This year she was named one of 25 Most Influential Women in Congress by CQ Roll Call, received the National Urban League’s Congressional Leadership Award, and received the Lifetime Achievement Award from Progressive Congress among others.  CRISP presented her with our 2014 Social Justice Champion Award.

Congresswoman Lee has been a champion for social work on the Hill, and Lee succeeded former Congressman Edolphus “Ed” Towns as Chair of the Congressional Social Work Caucus which he founded in 2010. She has worked with social work organizations to create opportunities for numerous congressional briefings on topics ranging from children’s mental health, to poverty and child neglect and, most recently, a briefing on poverty, trauma and the juvenile justice system.

She has provided resources for hundreds of social work students to visit Congress and learn more about federal legislative processes.  Recently, she introduced H.R. 3712—Improving Access to Mental Health Act, a bill that would add clinical social workers to qualified service providers for Medicare recipients in skilled nursing facilities and would increase the Medicare reimbursement rate for clinical social workers from its current rate of 75 percent to 85 percent.

Congresswoman’s Lee leadership has had an impact globally, particularly in the Caribbean, Haiti and Cuba, work that predates her time in Congress.  She was a member of the delegation with Secretary of State John Kerry that traveled to Cuba last year to reopen the U.S. embassy and has visited the country more than 20 times.  Although her presence in Congress is very important to social workers, she would make an outstanding ambassador to Cuba, a country that can benefit from a strong social work leader.

Failure to Expand Medicaid: Are We Failing Our Most Vulnerable Citizens