Failure to Expand Medicaid: Are We Failing Our Most Vulnerable Citizens 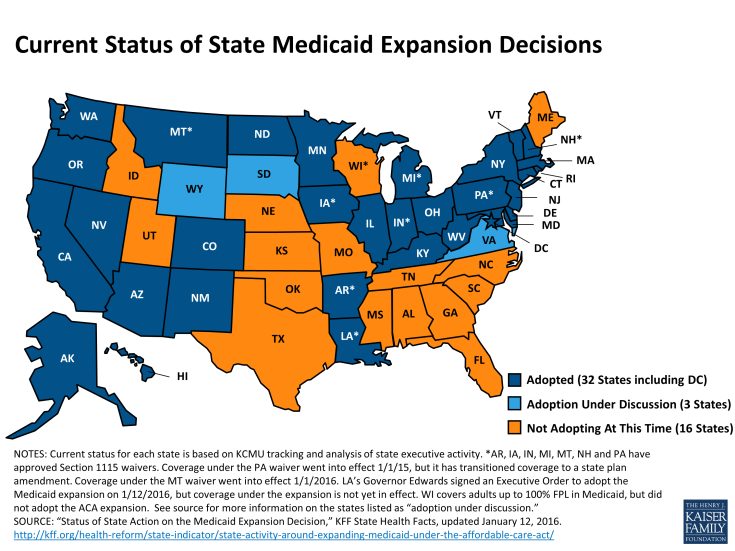 We often hear politicians make promises about what they will do their first day in office if elected, but how often do we actually hear about them keeping those day one promises after being elected? Newly elected Democratic Louisiana Governor, John Bel Edwards, on his first full day in office reversed the decision of his Republican predecessor, Bobby Jindal, to not expand Medicaid for the state’s poorest citizens.

As illustrated by the map above, there are currently 16 States primarily located in the South, and they all have in common Republican-led state legislatures that are still refusing to expand Medicaid and adopt the provisions of the Affordable Care Act (ACA). Despite winning two Supreme Court challenges and being signed into law six years ago, Congressional Republicans have voted to repeal the Affordable Care Act approximately 60 times as recently as August 2015.

According to the United States Health and Human Services (DHHS), the Affordable Care Act is working despite not being implemented in all 50 States as it was originally designed. DHHS states the ACA is “working to improve access, affordability and quality in health care.” Additionally, DHHS states the ACA has helped 16. 4 million Americans who were uninsured gain access to insurance and affordable health care.

In states that have not expanded Medicaid, 3.1 million poor uninsured adults fall into a “coverage gap” and will likely remain uninsured. These individuals would have been eligible under the Medicaid expansion. However, in the absence of the expansion, they remain ineligible for Medicaid and do not earn enough to qualify for premium tax credits to purchase Marketplace coverage, which begin at 100% FPL (Figure 2). Most of these individuals are likely to remain uninsured as they have limited access to employer coverage and are likely to find the cost of unsubsidized Marketplace coverage prohibitively expensive.

Researchers have found five medical conditions that are higher in non-Medicaid expanded states which include high blood pressure, heart problems and cancer.

Also, if you fall into the Medicaid expansion gap and ACA plans are too expensive for you, you may be able to access an income based community health clinic in your area. You can look up local resources using this link.

What Can We Do

First, we must advocate to ensure our most vulnerable citizens are protected. The National Health Care for the Homeless Council has put together an extensive resource list and tool kit to help you better advocate on behalf of citizens in your state. Secondly, we must encourage social innovation within our current health care models.

The links between poverty and poor health are well known: Food insecure children, now numbering 17 million in the United States, are 91 percent more likely to be in fair or poor health than their peers with adequate food, and 31 percent more likely to require hospitalization.5 Children under age 3 who lack adequate heat (another 12 million) are almost one-third more likely to require hospitalization.6 And families with difficulty paying rent and housing-related bills face increased acute care use and emergency room visits.7 – Read Full Article

Most of the time, our first responders who tend to the social needs of patients such as social workers and case managers are overloaded due to a shortage of manpower, funding and resources. According to the National Association for Social Workers (NASW), social workers provide 60 percent of the mental health services in the United States. Currently, the NASW is proactively seeking to “promote the inclusion of social workers as essential members of health care teams in coordinated care models” through advocacy and policy initiatives.

Most importantly, we must work collaboratively for collective impact in an effort to add protective factors and increase outcomes for our most vulnerable citizens.

How Crowdfunding Can Be an Effective Alternative for Medical Hardships